The most recent episode of Ancient Aliens looks at the Roswell UFO incident and suggests that it was not the first or last of these UFO crashes.

Titled Beyond Roswell, the episode also asks whether this technology was deliberately given to us in order to furnish humanity with a path to the stars.

The Roswell UFO incident in 1947 saw the local airbase tell the press that, following a rancher’s report of some unusual debris on his land, they had found a flying disc of some kind.

However, the next day the United States Air Force put out another press release describing the debris as coming from a high altitude weather balloon.

Things calmed down for a while but in the last few decades people have begun to question exactly what is going on.

The show highlights the FBI files released to the public in 2011 including the one below that mentions three flying saucers.

Earthfiles’ investigative reporter Linda Moulton Howe says she is amazed by how many real documents from the 1940s have come out and shed light about what really happened at Roswell.

She goes on to point out that the rancher found all sorts of weird foil objects and that the local RAAF base were ordered to go and pick up everything and not to miss a thing.

Now, was this miscommunication between the local RAAF and the USAF? With RAAF unaware of the USAF’s Project Mogul, which featured high altitude balloons and microphones?

Nick Pope, who worked for the British Ministry of Defence from 1985 to 2006 and looked into UFO sightings for them, says to suggest the intelligence people at the Roswell base would mistake a high altitude balloon for some exotic craft is just preposterous.

He also asserts that this was the start of the UFO cover-up.

Legendary Times publisher Giorgio A. Tsoukalos reckons it was a quick PR and damage control job.

In 2014 Tsoukalos actually travelled to Roswell Airforce Base to talk to the town’s mayor and look at the hanger where the craft and bodies were allegedly stored.

The mayor says that the bodies were supposedly taken to a side room to be examined.

When Tsoukalos asks him what happened to all the debris, the mayor says it was all taken to another base and is no doubt well preserved.

So why has nobody out of the dozens and maybe hundreds involved come forward?  The suggestion is that they have been put under huge pressure by the government to keep quiet.

However, some did speak to their loved ones about what they saw.

Major Jesse Marcel was the first military officer to arrive at the crash site and, according to his grandson, he used to speak about the incident in private.

His grandson says around the dinner table he told them he could not make head or tail of the debris that was found.

He even took it home and laid it out in the kitchen and told them the metal was malleable but also sprung back into shape, like some of the modern memory metals we use today.

The grandson also says a photo of his grandfather that appeared in the press does not feature the same material, it obviously being part of a weather balloon.

The bombshell before Roswell

The episode also looked beyond New Mexico to other incidents in the USA.

Take Cape Girardeua, Missouri, in 1941 where a local reverend received a call from the police asking him to come and give aid and comfort to some crash victims.

Mythologist and Author William Henry recounts the story saying: “He probably thought it was going to be an automobile crash, but to his surprise when he arrived there is a disc shade craft…there are three alien bodies lying on the ground.”

Technology of the Gods author David Childress goes on to say: “The miltary was there, the FBI was there, and he was astonished to find that this was the crash of some sort of UFO and that the being was an extraterrestrial.”

David Wilcock, author of The Synchronicity Key, tells us the reverend looked closely inside the UFO and saw hieroglyphic type marks. The government allegedly told him to say nothing and that it was all classified.

Reverend William Huffman said nothing publicly but in 1984 his wife, who was on her own death bed, finally told rest of family about what had happened. After that other witnesses came forth including the brother of the sheriff and local fire department members.

Linda Moulton Howe tells us a military unit came and the remains were flown to Washington D.C.

This was a sort of test run for Roswell where the government learned how to handle both the events and the materials recovered.

Why all the UFOs

Many believe World War II was the trigger with the rapid advances in military technology including atomic weapons coinciding with the surge in UFO activity.

Tsoukalos of Legendary Times asks: “Is it possible that we, by doing that, signalled aliens out there.”

It is not mentioned on the Ancient Aliens show but some believe a galactic emissary of sorts was sent in the form of Valiant Thor.

Where is all this alien tech?

The U.S. Air Force Installation known as Area 51 is a prime suspect according to many.

The government did eventually admit to its existence, saying it is where advanced research is carried out but that there were no secret alien craft.

This video shows two men poking about the back gate of Area 51 this year.

But nuclear physicist Stanton Friedman says they were just tossing the public a bone, asking: “Would anyone trust the CIA to tell the truth, the whole truth and nothing but the truth?”

Many say yes and the evidence lies in our own rapid technological advancements in recent decades.

In 1997, on the 50th anniversary of Roswell, United States Army Colonel Philip J. Corso published his book The Day after Roswell.

In the book Corso confirms there was a crash and that the wreckage was stashed by the military.

He was working at the  Foreign Technology Desk of Army Research and Development, but instead of working with German or Russian technology he says it was extraterrestrial in nature.

According to Corso scientists spent years examining the technology but were often unsuccessful.

UK expert Pope says they took to seeding private corporations with the alien tech, without disclosing its nature — acting as a sort of strategic inspiration for some of America’s biggest companies.

Tsoukalos points out that only after Roswell did companies like IBM flourish.

The book claims night vision technology was taken from the lens of an alien pilot’s eye, integrated circuits came from a spacecraft control panel and that kevlar was developed from alien spacesuits.

George Noory, a radio host on Coast to Coast AM, says: “Isn’t it interesting that after the 1947 crash in Roswell, New Mexico, our technology took off,  just like a rocket.

Corso also said this activity was not limited to the USA but happened all over the world.

However, all that funding and UFO activity needed a cover story and many say the Cold War was the biggest ruse of all.

Retired CIA pilot Jon Lear says: “The Cold War was never really a war, it was an agreement between Russia and the United States that we’re going to give the public something else to worry about. Atomic bombs falling on their heads rather than thinking about UFOs and flying saucers.”

Noory says it is clear governments all over the planet have been hiding this. But he asks why?

In the Astrakhan Oblast region of Russia, 500 miles south of Moscow on June 19, 1948, at the Soviet research base at Kapustin Yar the radar screens picked up erratic blips just as a MIG jet pilot spotted a cigar-shaped object of unknown origin.

Wilcock says the reports tell of the MIG firing off a missile just as the UFO unleashed some light weapon, causing both aircraft to crash.

The Ancient Aliens episode explains that many think there were special teams ready to recover such craft and then take them to a warehouse to be examined.

Word to those in the know was that around 1/4 of a mile below ground autopsies on alien beings and reverse engineering of the craft took place.

Many point out that the Soviets managed to acccelerate both their nuclear and ballistic missile program rapidly after this event.

Also in 1959 the USA sent U2 spy planes to the base and saw they had been carving weird shapes and glyphs on the ground.

Wilcock says: “When we actually look at the images…they look similar to what we see in crop circles and in certain ancient landforms visible on Earth.

“There clearly appears to have been an attempt to communicate with the extraterrestrials saying X marks the spot.”

Ancient Aliens asks, were they trying to attract UFOs?

Also this is not the only area outside the USA. There is also Pine Gap in Australia where there have been rumors of secret experiments with electromagnetic propulsion taking place some five miles below the surface.

Observers have also spotted mysterious runways in the remote regions of China, some a mile long and half mile wide…a testing ground for some sort of alien ship?

Theorists point to discoveries such as superheavy element Ununpentium (Uup) and new advanced metal alloys with strange properties as evidence that our ability to understand alien technology is finally coming up to speed.

Some say Uup is derived from a fuel source found on one of the UFOs. They predict rapid advancement and perhaps distance space travel sooner rather than later.

Linda Moulton Howe says: “The 21st century is being built on extraterrestrial technology.”

Tsoukalos leaves us with this thought: “How is it possible that in the last 70 years, we’ve accomplished more than in the last 5,000 years — technologically speaking.”

You can watch the full version of this episode of Ancient Aliens on the History Channel’s official site and follow us on Facebook or Twitter for more on this subject. 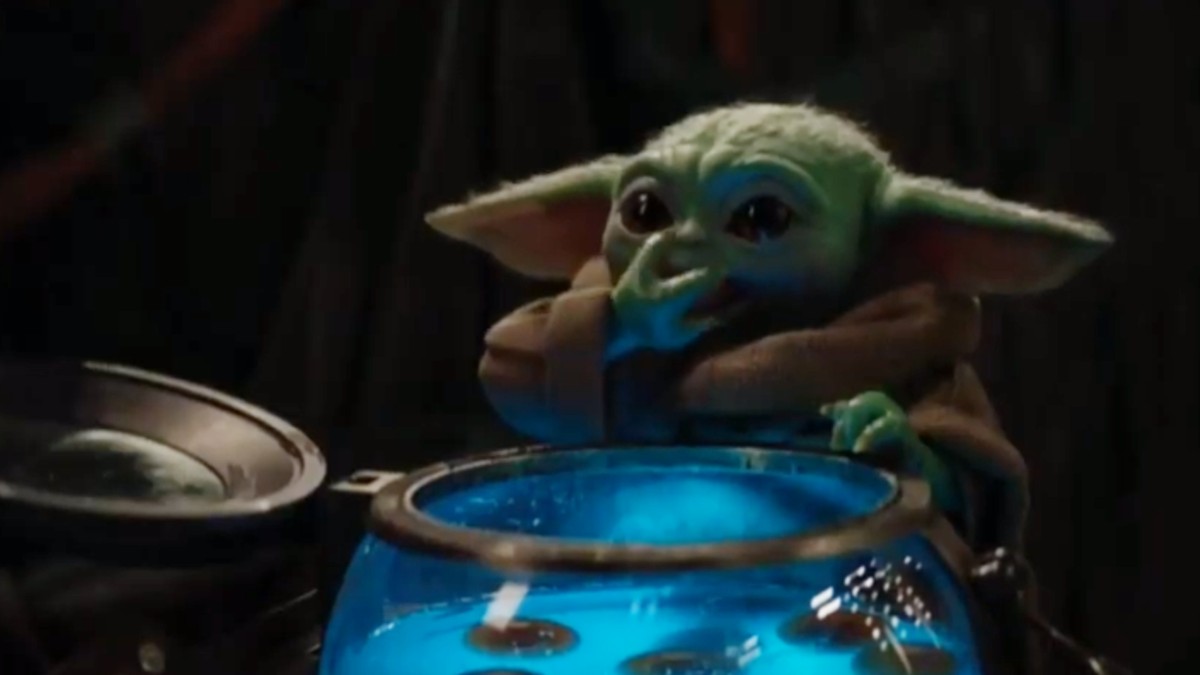 Baby Yoda from The Mandalorian is canceled on Twitter: The scandal explained
RELATED POSTS