The WWE Hell in a Cell pay-per-view took place on Sunday night, Sept. 16, and the very next night the SmackDown Live brand rolled into Oklahoma City for a WWE Live event.

With wrestlers like Jeff Hardy and Randy Orton recovering from a hellacious cell match and Becky Lynch as the new women’s champion, there were a lot of interesting matches on the show.

Here is a look at the WWE Live event results from the Oklahoma City show.

The show opened with New Day coming out first. There was a giant inflatable Booty-O’s box beside the stage. They came out with Xavier Woods playing the trombone, as usual.

Sanity came out next and then The Bar followed. The Oklahoma City crowd was solidly behind The New Day and they ended up picking up the win by pinning Cesaro.

The next man out was Luke Harper, who came out to the Bludgen Brothers music and in his full mask, followed by Karl Anderson and his tag team partner Luke Gallows.

Sadly, the fans didn’t care about this match at all.

Harper seems lost without his tag team partner Erick Rowan and Karl Anderson couldn’t get the fans behind him either outside of Bullet Club “Woop Woop Too Sweet” chants at the start of the match. The end came when Anderson hit a fluke roll-up for the pin.

After the match, Harper got mad and threw some chairs, while also kicking over the steel ring steps.

Naomi and Asuka vs. IIconics

Naomi came out next to her Feel the Glow theme, followed by Asuka and then the IIconics who, as usual, had a microphone and proceeded to put down Asuka for being a choker, Naomi for being Naomi and Oklahoma City for the Thunder’s playoff loss last year.

By the time they finished talking, the crowd wanted them beaten and that is what happened. Asuka made one of the IIconics tap out.

Andrade Cien Almas and Zelina Vega vs. Rusev and Lana

The next match was a mixed tag team match and it was clear that the WWE Live production team was using this as a way to sell the Mixed Match Challenge, which starts tomorrow night.

Zelina Vega was out first, insulted everyone and introduced Almas. After that Rusev’s music hit and the crowd loved him. His music then stopped and Lana’s dance music started and they came down together.

There were a ton of Rusev Day chants and the fans were very much behind him. Almas tried to cheat and Aiden English ran down to the ring and broke up a pin. The match ended when Rusev and Lana got Almas and Vega both in the accolade and both of them tapped out.

The Miz vs. Daniel Bryan

This match was a huge surprise with Daniel Bryan taking on The Miz. Miz came out first, followed by Bryan.

The Miz then did a great impersonation of Ravishing Rick Rude, telling all the sweat-hogs in Tulsa to shut their mouths while he showed them the best body in the WWE. He then said the same thing about taking off his scarf and then his glasses.

When referee Charles Robinson told Miz that they were in Oklahoma City, he seemed shocked and then told the audience he was trying to compliment them because Tulsa is so much better.

Miz then said he was leaving, but Bryan chased him down and attacked. The match was great, as expected, and Bryan ended up winning with the running knee.

There was an intermission next, and when that ended Shelton Benjamin came out to the ring. He was followed by The Perfect 10 Tye Dillinger, and Benjamin attacked immediately, taking the role as the heel.

The fans didn’t care too much here either, although Benjamin had some vocal fans and a few people chanted “10.” Benjamin won when he used the ropes to get a cheap pin on Dillinger.

This was a three-way match for the SmackDown Live women’s title. Becky Lynch won the belt the previous night at Hell in a Cell, so this was her first title defense.

Charlotte came out as the babyface, and a lot of fans in Oklahoma City loved her. Everyone hated Carmela. Becky Lynch did not get as big a pop as she has been getting on TV, but there were still a lot of fans of Lynch there.

Most of the match saw Becky and Charlotte beating each other up while Carmela watched and picked her spots. The end came when Charlotte took down Carmela, but Lynch ran in and stole the pin. 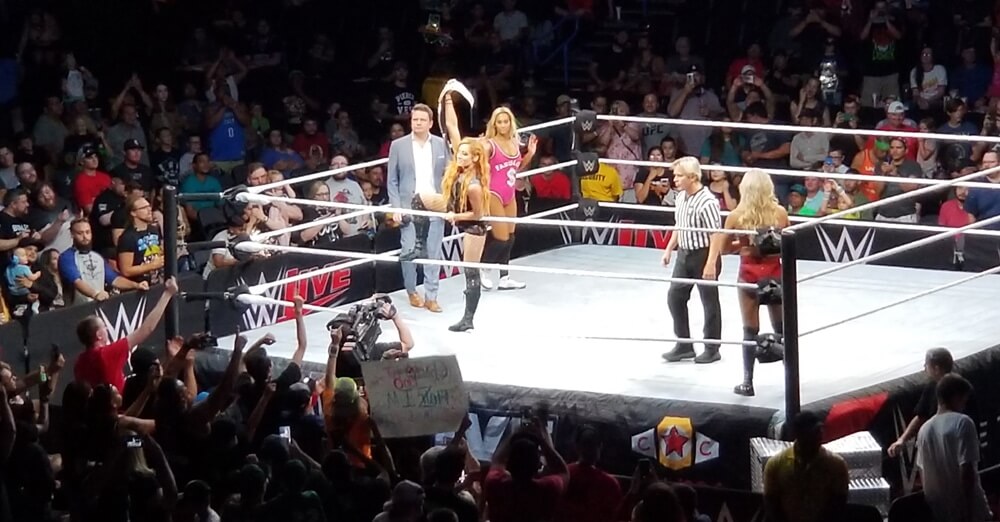 Someone in this match does not belong with the others.

After the previous night’s matches, it was clear that singles matches were out so this six-man match took place instead. Randy Orton and Jeff Hardy had gone through Hell in a Cell, while Styles and Joe put on a great match as well.

R-Truth got a lot of time in the ring and actually had some really fun moments with Shinsuke, including a dance-off between the two. Hardy wrestled more than Styles, which was surprising after his fall in the cage the previous night.

Fans loved Randy Orton, Jeff Hardy and AJ Styles and Samoa Joe had a fair share of fans in the audience as well. The crowd also loved to yell “What’s Up” with R-Truth.

The end saw AJ Styles hit his flying forearm against Samoa Joe for the win to end the show. The winners stuck around for quite a while after the match, slapping hands with the fans on the floor.