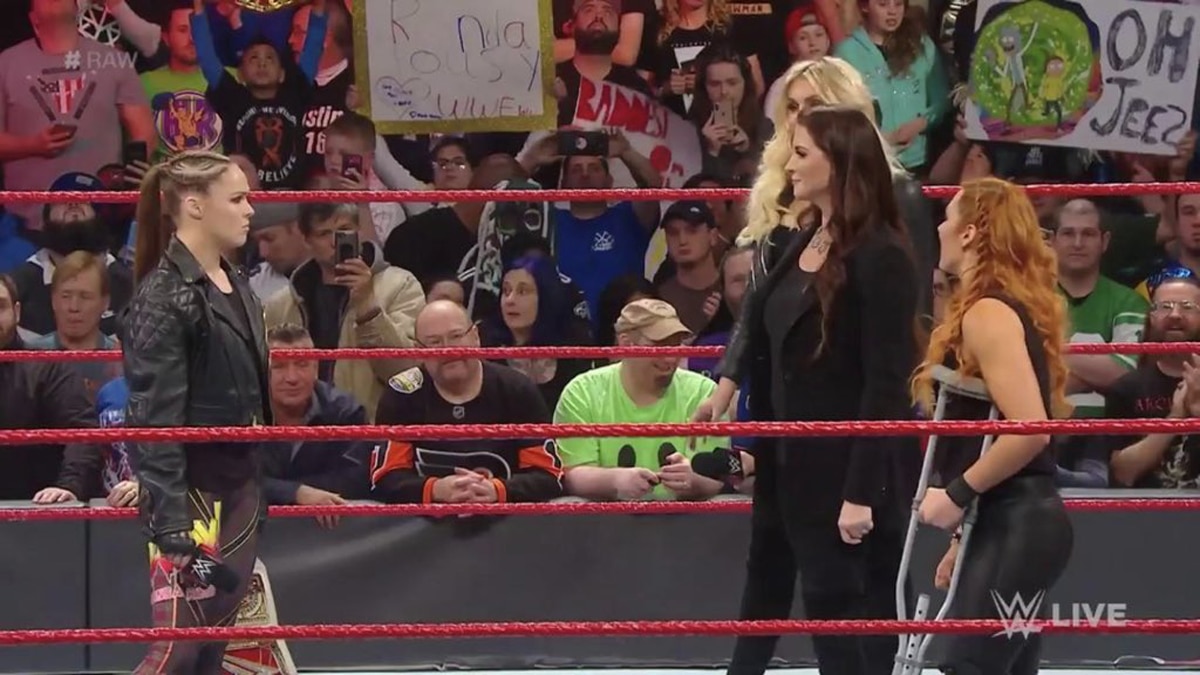 Instead, McMahon announced that WWE dropped all charges against Becky Lynch and reinstated her from her 60-day suspension.

Then, McMahon announced that as long as Becky signs a release that abdicates the WWE from any liability if her knee is further injured, she gets to wrestle Charlotte Flair at the WWE Fastlane PPV for the WWE Raw women’s title.

That led to the contract signing at the end of Monday Night Raw.

However, with 20 minutes left in the episode, it was clear that there would be more to happen here than just a confrontation between Charlotte Flair and Becky Lynch.

Stephanie McMahon came to the ring first and called out Charlotte Flair first. Then, she called out ‘The Man” Becky Lynch, who came out on a crutch, needing to sign the non-liability agreement (a hold harmless agreement). Lynch was limping badly.

Then, the camera showed up outside and Ronda Rousey had shown up and was on her way in.

Her music started and Ronda Rousey made her way to the ring. She said she never vacated the title, she just gave Stephanie a week. She demanded her title back and McMahon gave it back to her.

Stephanie McMahon then changed the match at Fastlane. If Becky loses to Charlotte, she is finished but if she beats Flair, she is added and it will be a triple threat match at WrestleMania35.

Ronda Rousey then said that Stephanie McMahon cares more about her bank account over her own pride. Rousey said that she can do anything she wants and no one can stop her because she makes the WWE too much money.

Rousey then turned heel, said “damn the Man, screw the Woo, and no more Mrs. Nice Girl” and destroyed Becky Lynch, while Charlotte Flair walks out.