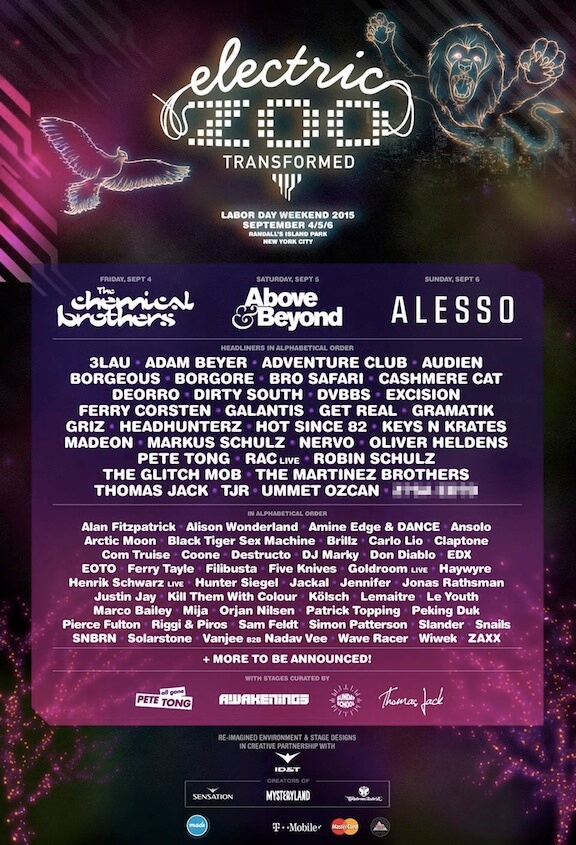 With the seventh annual Electric Zoo Festival right around the corner, we here at Monsters & Critics are getting massively excited. The party will be coming back bigger and better than ever to Randall’s Island in New York, bringing the biggest names in electronic music culture. Taking place on September 4th, 5th, and 6th, this year marks a change, as Made Event is now working with ID&T, the minds behind Tomorrowland, Tomorrowworld, and Mysteryland, which are all revered as the biggest and best showcases of electronic music globally. Along with this partnership has come the inclusion of the “Transformed,” concept which will revolutionize Electric Zoo as a festival and bring with it bigger production, better guest interaction, and safer crowd management.

Now of course, Electric Zoo is all about the music, and we figured what better way to get you prepared than by sharing our top ten must-see acts of Labor Day weekend, If you aren’t quite sure who to check out during your time there, check out this list:

First and foremost, If the Chemical Brothers are not the first artist on your list when going into the weekend, then we may suggest that you re-prioritize. Coming right off the release of their newest album, Born in the Echoes, The Chemical Brothers are showing that they can remain relevant in a music scene crowded by big beats and new faces. If only to pay homage to the guys who have been doing since before you were born, check these guys out.

On the other end of the spectrum, If you want an example of how quickly someone can go from zero to hero status, you’ve found your man. Discovered by Tiesto in 2013, Dutch DJ and Producer, Oliver Heldens has been crushing it lately. His singles “Gecko,” Koala,” and “Pikachu,” have received wild acclaim for continuing to move the deep house movement forward. Not only does this guy make great music, but he’s downright fun. Heldens is becoming known for his wacky dancing skills, and his unique energy on stage. This guy was opening sets last year, and will practically be headlining this year. Don’t miss.

Cashmere Cat is awesome. Plain and simple. With a building fan base and some massive remixes under his belt, such as an edit of 2 Chainz’ “No Lie,” as well as being featured on Ariana Grande’s recent record, it’s no doubt Cashmere Cat has talent. Do not miss Cashmere Cat’s minimal style, and smooth beats.

You may have heard Alison’ Wonderland’s break-out single, “Run,” as it’s seen some radio airplay and has spread to decks around the country. Featuring her own vocals on a few over her tracks, and some truly unique sounds, Alison Wonderland has been gaining steam. Make sure to make time for a new face on the scene that is continuing to show her chops.

Just when you thought you couldn’t handle any more masked musicians, BTSM showed up on the scene. While these guys might use the gimmick to their advantage, we have to say it works. The only thing that could work in tandem with three badass demon tigers bobbing on stage is their filthy dubstep-meets-everything-else menagerie. In a scene that’s decidedly become more groovy and melodic as of late, these guys keep it realer than real. File under: music that your grandparents would hate.

Speaking of music from Canada that your grandparents would hate, Snails makes music they would really hate. Self-labeled as vomitstep, Snails may not be for everyone, but that hasn’t stopped this producer from picking up massive steam. Hanging tight with the Twonk crew (i.e. Brillz, Loudpvck, Milo & Otis), Snails has a sound all his own.

Some know him as the Hard Events front man, others know him by his moniker, either way this DJ/Producer/Entrepreneur has developed his credibility over many long years in the industry. Focusing on the deeper ranges of pure techno since the 90’s, Gary Richards is another one of those DJ’s that should be seen out of pure respect. Destructo is a true mover and shaker in the industry and we’re making a safe bet that it would be wise to make time.

Not a whole lot is known about the newest OWSLA family member, other than she has dope hair, and plays great music. Having first met Skrillex back in 2014, and having played a back-to-back set at Burning Man, Mija has been in the game shorter than most, but shows an incredibly diverse range of talent.

Take your favorite 8-bit video game, well, 64-bit to be exact, mash it with a little more funk, and a little more groove, and you’ve got Wave Racer. If you’re looking to hear something a little more whimsical and dream-like to get you away from all the craziness, look no further. We highly recommend this producer.

Finally, we put our stamp of approval on Keys N Krates. While many electronic musicians are known for their DJ sets, these guys choose to perform live when they can. Utilizing the musical stylings of drums, synths, and turntabalism, Keys N Krates have brought their massive live show to huge venues across the world, and now, they’ll be bringing it all to Electric Zoo.

There you have it. Our list of must see acts. There are dozens of other great musicians beyond these listed that you’ll be able to check out all weekend long. This, along with great food, great experiences, and a variety of workshops will make Electric Zoo: Transformed, the best iteration yet. If you are as excited as we are, then we know you can’t wait for those wristbands.

Be sure to grab tickets now if you don’t have any yet.

If you want to learn more about the festival check out the following links below:
Website
Facebook