Valentine’s day is lame when you’re single, all of the saccharine nonsense around you makes you want to puke. Love is for Hallmark and chocolate is special everyday.

No better way to evade than raging out to some loud, heavy bass music and getting fucked up with your friends. Like John Stamos’ bellybutton fucked up. 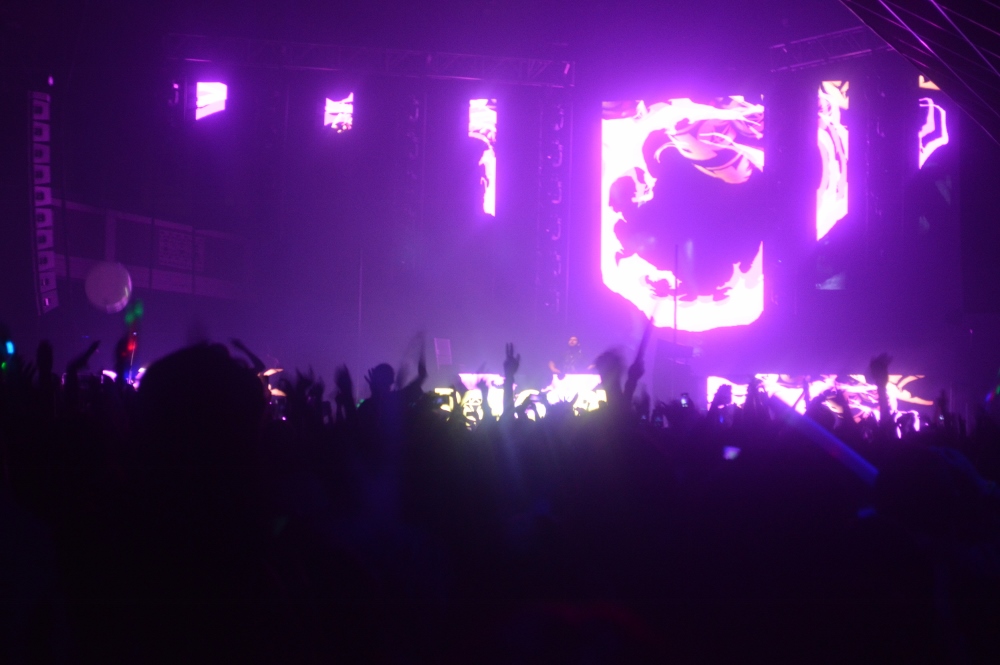 That appeared to be the mission for the sold out crowd of the LED x LA Borgore show this past Saturday. At the massive Shrine Auditorium next to USC, it’s welcoming to have a Los Angeles show, actually in Los Angeles, with a lineup of LA only artists, giving we the Angelenos the sub-driven anti-valentine’s we deserve.

Any electronic show with bass artists on the bill is guaranteed good time, period. The low end sucks you in and turns you and those around you into primal dance monsters. 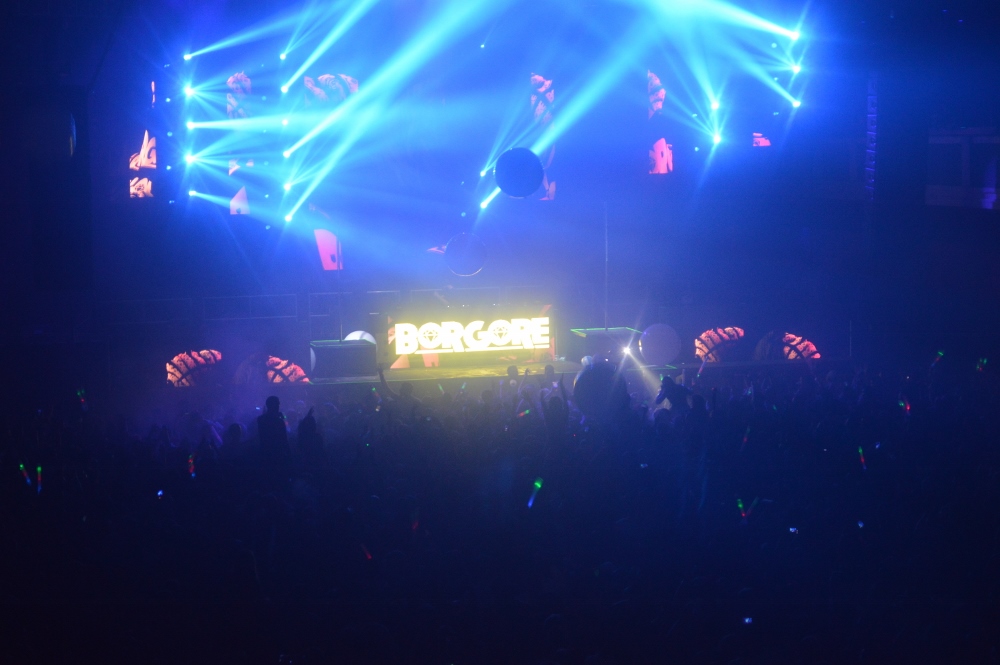 Since the rise of dubstep earlier this decade to the Trap-at-100 bpm currently in vogue, bass music, once a underground niche, has been cultivated into a formidable music scene.

It may be hellacious garbage for you but face it, these kids want bass and you’re too old. 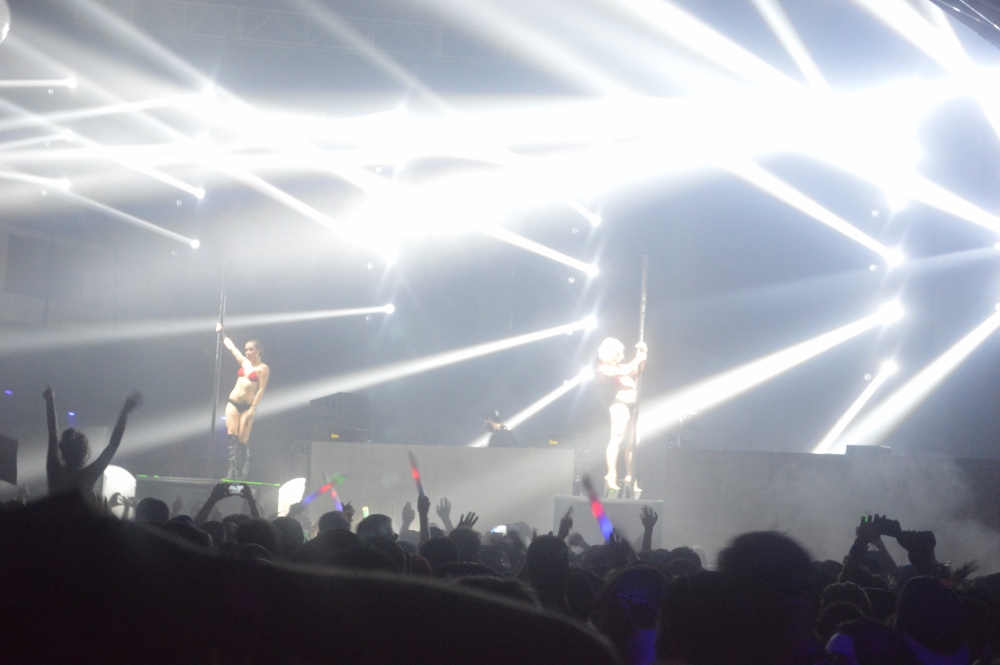 The night began with a set from DJ Brazzabelle, but I missed her because of egregious LA traffic.

Luckily the traffic didn’t keep me from seeing Valentino Khan, Khan’s one of the LA-based Electronic producers I trust, his nonpareil brand of Trap, Moombahton and House makes him one of the fastest rising stars in the EDM community, with releases already on Skrillex’s OWSLA imprint, this guy can’t be stopped.

His set was a throbbing onslaught of bangers from all tempos, the pumped crowd wasn’t afraid to go all out this early on in the show because Valentino knows how to get the room moving. I wish he could’ve played longer but I got to hear his Moombah-demolisher “Rukus” and danced like an idiot so all was well. 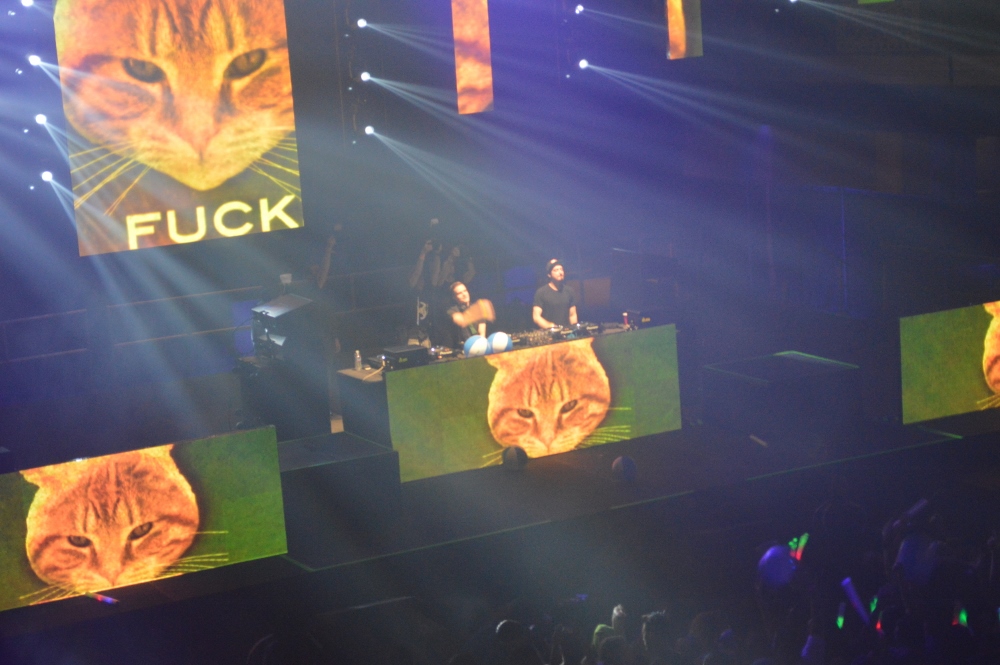 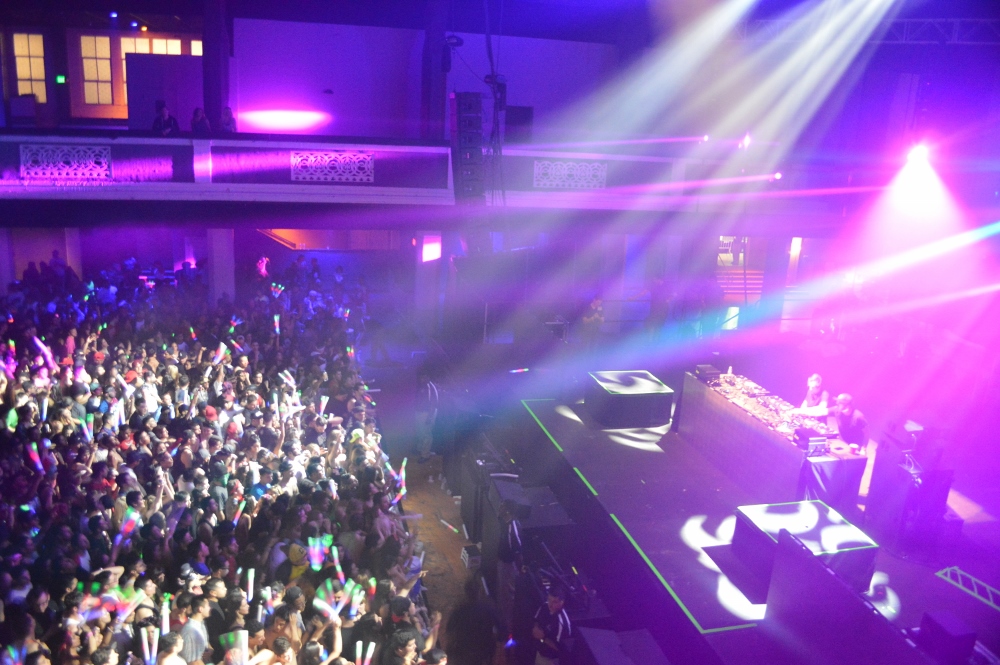 Following him was a fellow rising act that I’ve also enjoyed for the past couple of years, Bass wielding duo Milo & Otis. This set was when shit started getting really messy, in the best way possible.

These guys are some of the most astute DJs I’ve seen in a while, when one drop blew me away, the next blew it away even further.

They read the crowd right and turned up the bass factor, needless to say they went ballistic. Some sashayed while walking by the stage, some stopped and danced like they’ve just had acid flinged at them.

Milo and his partner Otis first caught my attention with their Moombahton a few years back, subsequently with their Trap, but seeing them spin seals my reverence.

Although another ephemeral set from the night but a high-octane roller coaster that deserves a tip of my bass hat nonetheless. 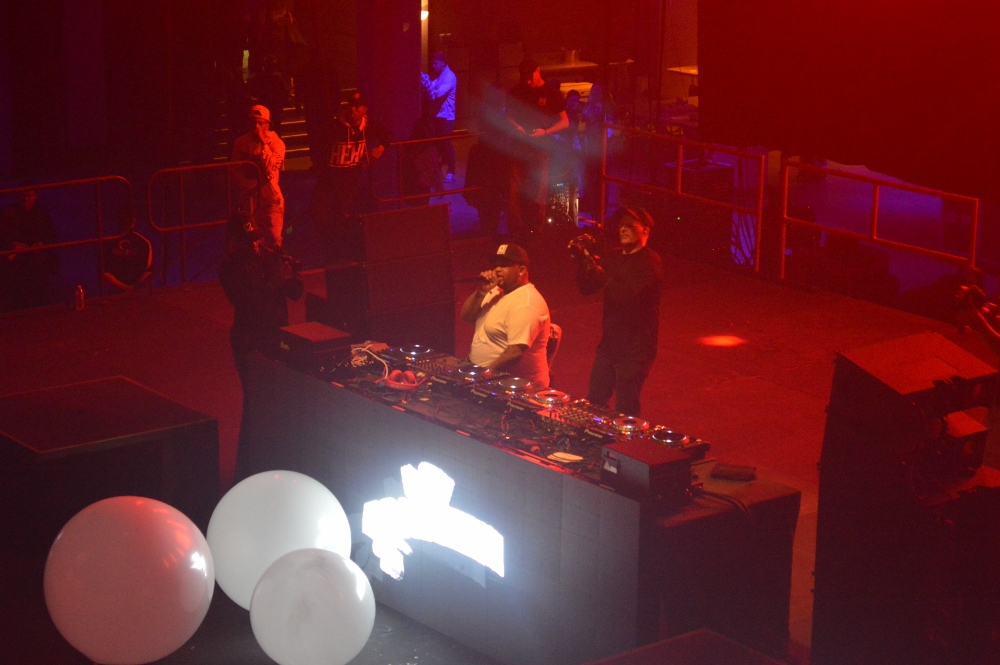 Penultimately was the producer in demand (who shares his nom de guerre with my fifth favorite condiment), DJ Mustard, spinning a set showcasing his work and a smorgasbord of mainstream hip hop essentials.

Some will say playing these seminal yet hackneyed tunes is a cop out, but I ask those naysayers to be in a room where more than four thousand people, mostly white people under the age of 25, are blustering along to Lil Jon and the Eastside Boyz’ “Get Low”, it’s a spectacle and I highly recommend it.

The mix was enticing, throwbacks here, “OMG that’s on the radio” there, Mustard knows how to throw down (yeah, doesn’t sound right to me either). 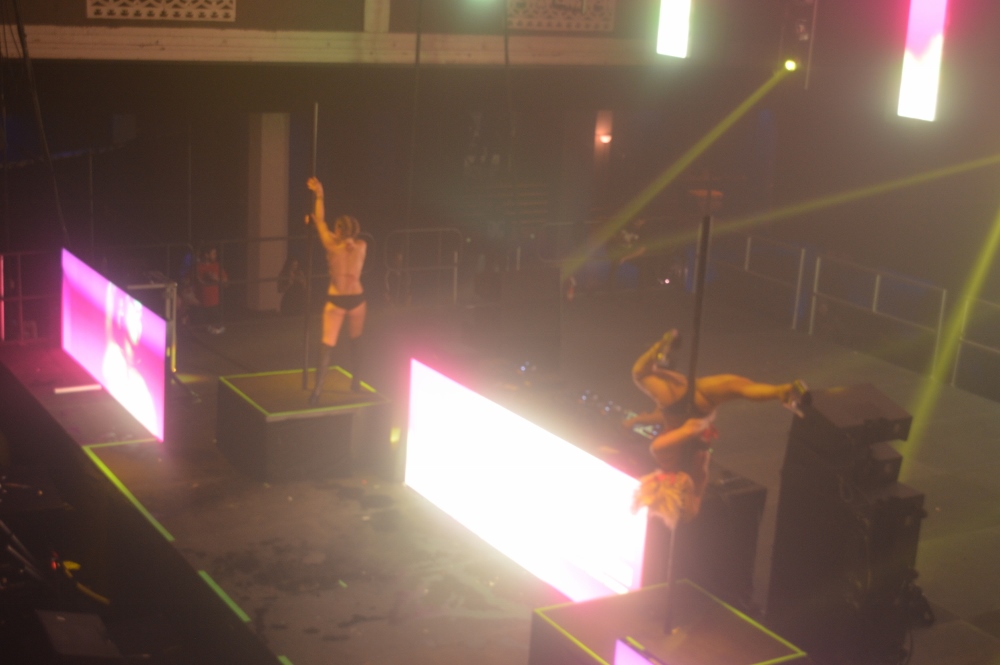 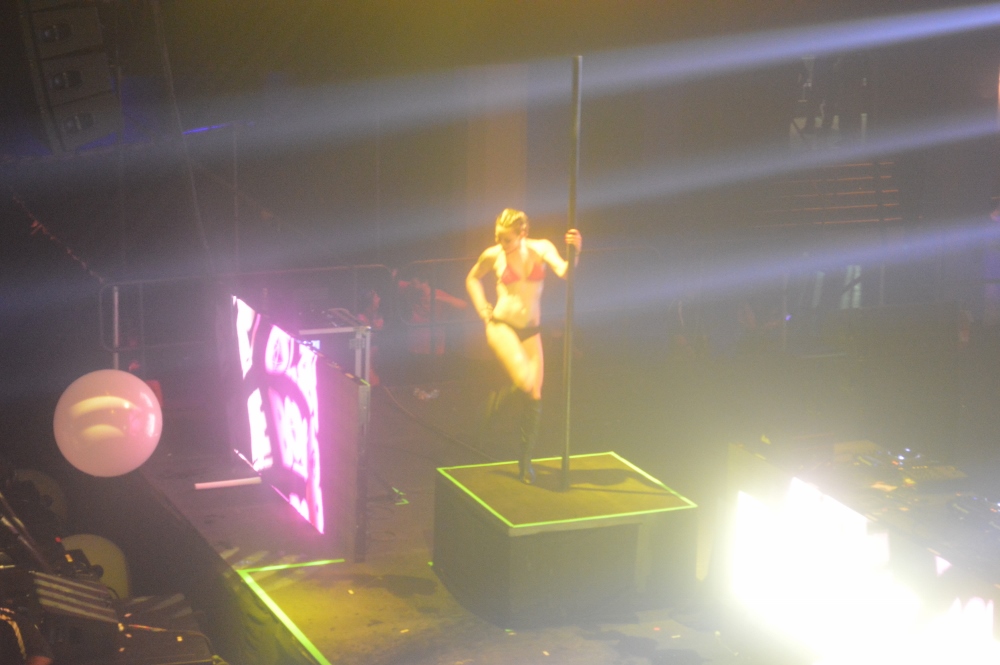 Finally the set of night everyone, including yours truly, was waiting for. Israeli DJ/Producer/Rapper Borgore started spinning, and it was madness thereafter.

I had the pleasure of seeing Asaf Yoseph Borger, otherwise known as Borgore, play at Coachella in 2012, his set, along with his music, could inspire a juxtaposition of war-like dancing and side-splitting laughter.

There were pole dancing half naked women on parallel poles dancing throughout his whole set to bass music that made Skrillex then look like Skrillex now. It was loud, distorted and offensive… The three quickest ways to my heart.

Whatever your opinion is on “what constitutes as dubstep?”; save yourself a lot of time, Borgore’s take on bass music (fittingly referred to as Gorestep) is visceral, aggressive yet melodically pleasing.

His remixes are mind-blowing reimaginings of well established songs (check out his remix of Passion Pit’s “Sleepyhead”). 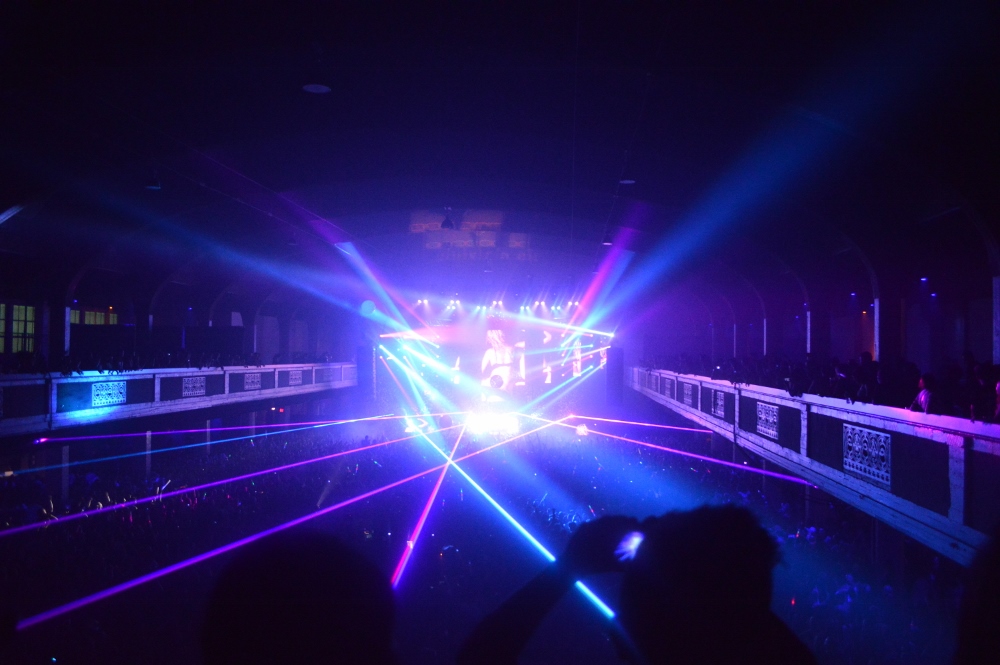 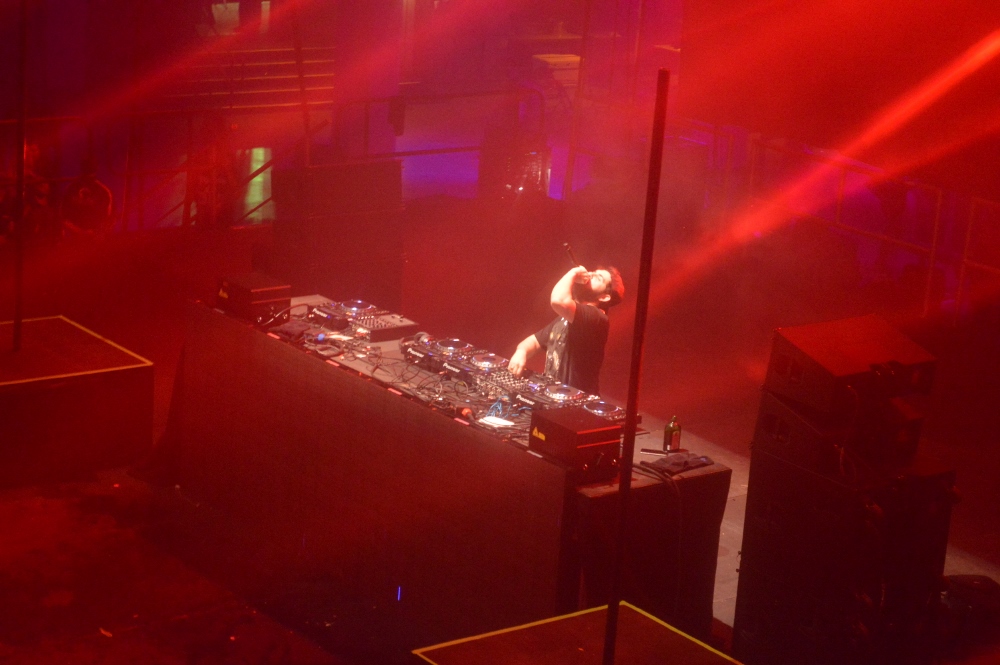 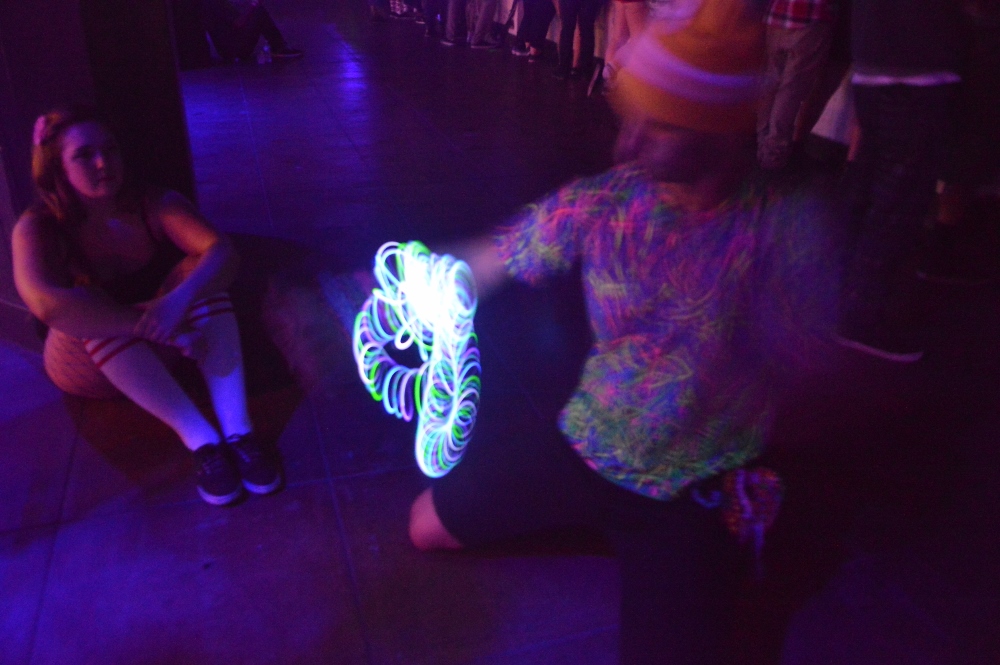 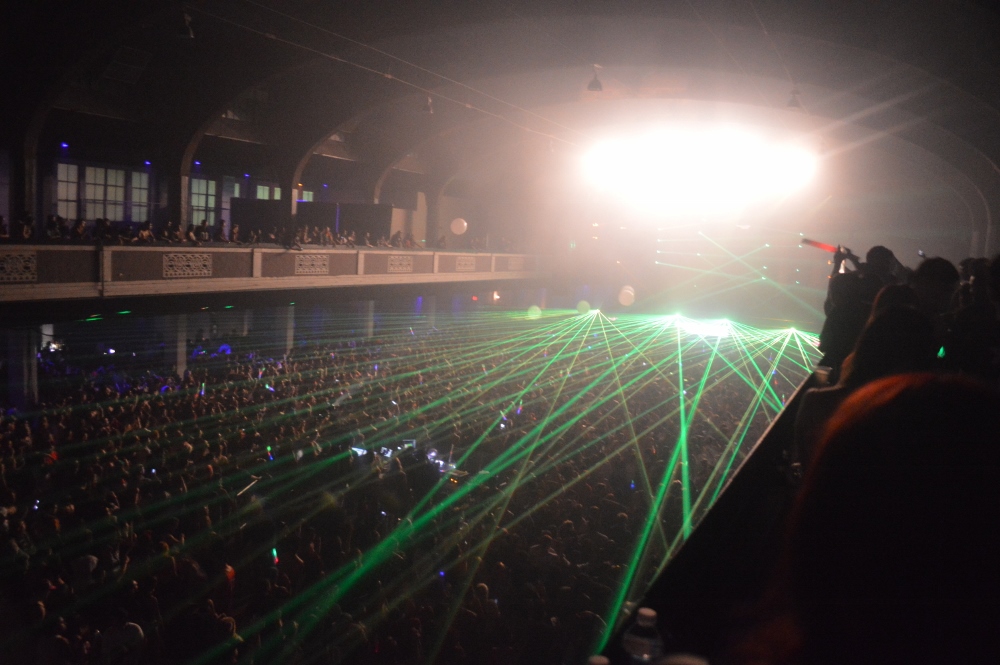 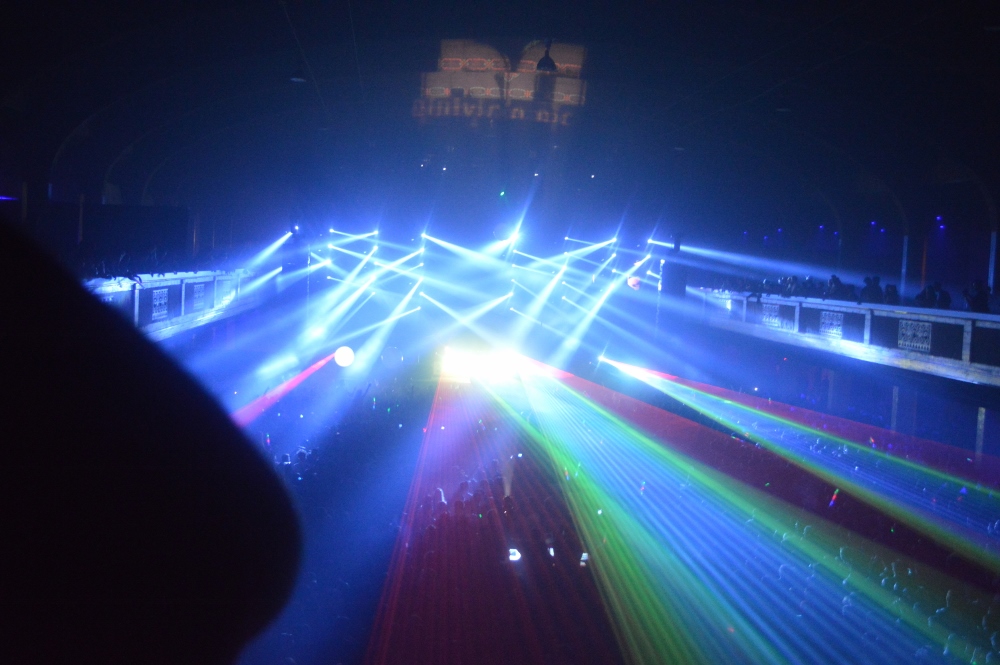 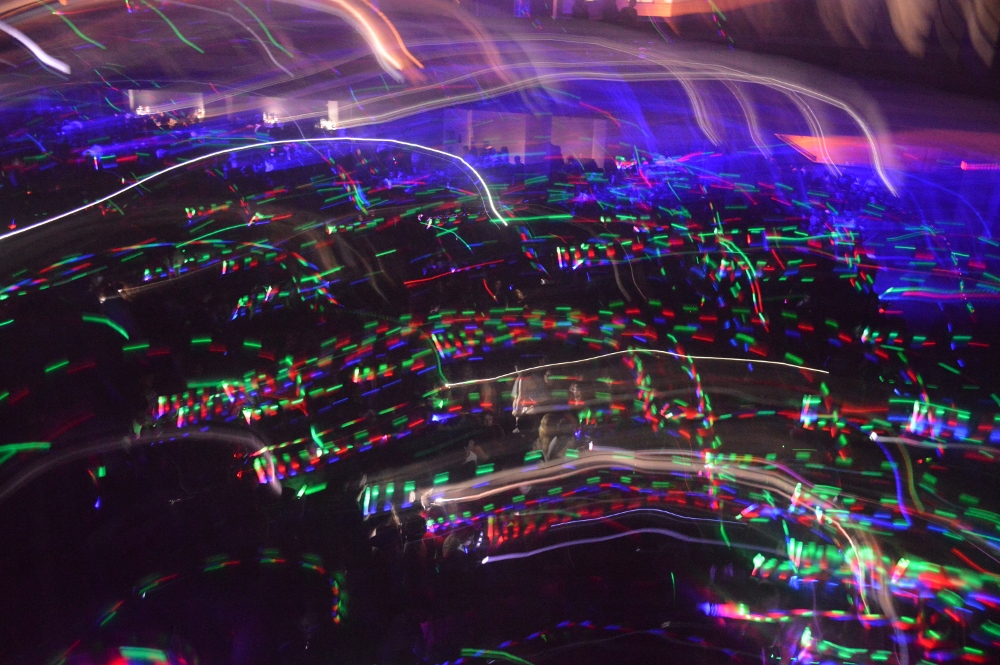 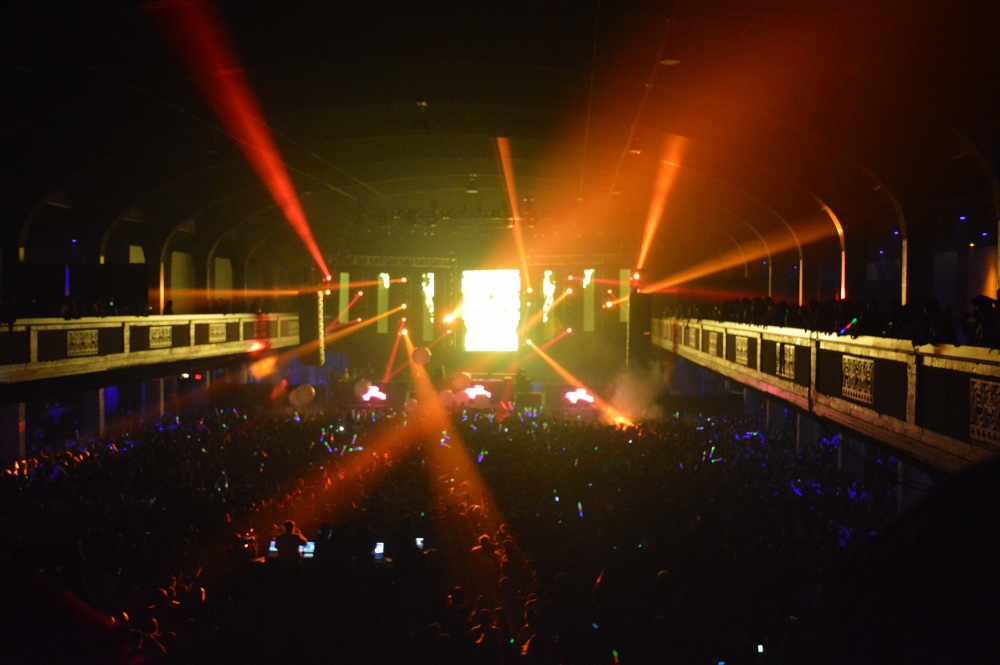 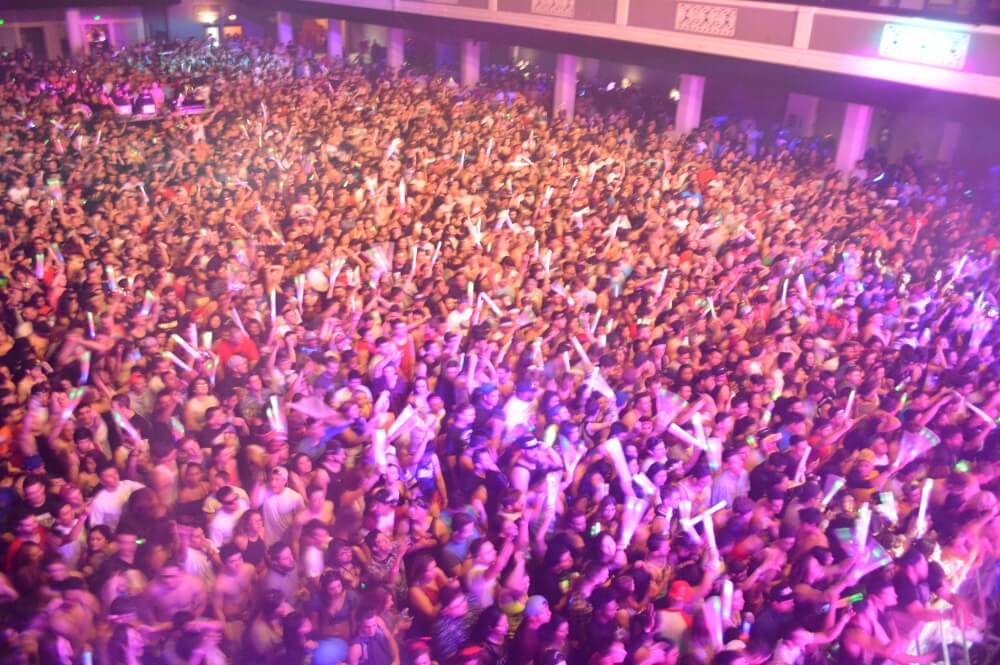 His raps may be over-sexualized, but if you can’t find even the slightest feeling of comical intent, you may be taking him too seriously.

(Save your Tipper Gore gimmick for, well, never.) In the way Excision makes sonically devastating bass music constantly pushing the boundaries of what are eardrums can reasonably stand, Borgore has evolved his comedic bass fusillade into adept artistry, showing he can excel at whatever he puts his mind to. This was apparent in his DJ set.

Instead of the Gorestep blitz of yesteryear, Borgore’s set was an amalgam of all of his foray’s in the ever expanding EDM sub-genres.

Playing key tracks from other artists in those tempos but also having something of his own to fit in there was really impressive this time around for me.

I’ve already been impressed with his dives in new territories of recent, though the goofy raps and gnarly Gore drops I adore are still there, and don’t forget the talented pole dancers on stage, they are still there too.

Even Borgore himself gave the pole a little action this time around!

The highlights of his sets had to be the rapid mixing he has so clearly made second nature and all of the heavy Gore explosions, including his most recent remix of the goofy ode to the white stuff: “CoCo”, which is fitting, it is essentially a sonic overdose with a brutal bass line that cuts through you like butter.

Including his most recent work were some Gore-classics like “Love” and “Nympho”, which, again to point out wondrous spectacles, got a sold out crowd to scream (in unison mind you): “SUCK IT BITCH!”…what can I say? Made me snicker in 2011, makes me snicker now.

Shirtless gorillas deep within the morass of a crowd started moshing, an act I would usually mock, but when it comes to Borgore’s musical output, it kind of makes sense, it’s aggressive like any metal or hardcore tune would be. He never pulled a punch, every drop regardless of classification was mind-blowing salvo.

The close of the set, featuring his anthemic “Decisions” that has Miley Cyrus’ vocals within, and a distorted rendition of the “Seven Nation Army” bass line was the icing on the cake that, according to “Decisions,” bitches love. 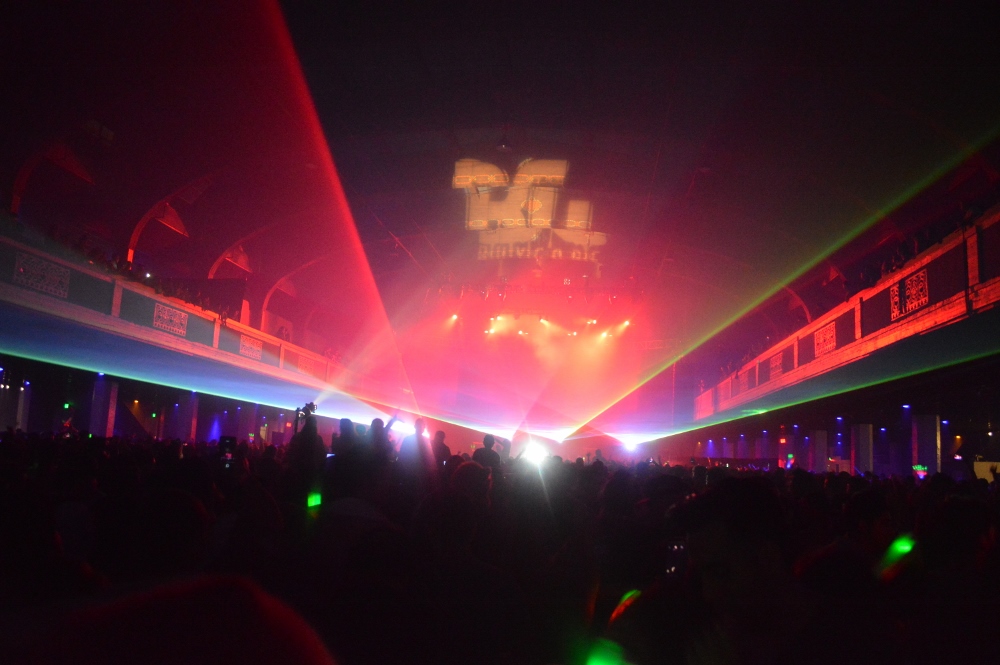 Borgore has been a resident of LA for the past two years and I can say we’re lucky to have him. His music is fun no matter how you look at it, and his DJ sets are irreproachable in terms of his catalog and his mixing between songs like multifarious Blitzkrieg Bop’s.

He is only 27 and he has been making kick ass music and selling out venues like the Shrine for the greater part of his twenties. Next time he plays here I will definitely come back, maybe with earplugs for a safer listening experience.

Until then be sure to catch him on his tour now! He will be playing some Canada gigs this week. For tour info and his debut full length album “NEWGOREORDER”, and any of his other releases, merch etc. go here: http://buygore.com/

Kieran J. MacIntyre is a voracious music nerd of all genres, bass player and managing editor of M&C Music, you can follow him on Twitter

Twist It Up on Shark Tank: Where to buy it

Days of our Lives recap for Thursday July 5: Hope realized where...