To loosely paraphrase Nietzsche, if you gaze long into the abyss, the abyss also gazes into you. Last night at Downtown’s Regent Theater, the abyss gazing back was The Soft Moon, and it has never sounded so good.

The vibrant theater, situated in the cultural heart of Downtown Los Angeles, was the perfect scene for a night of post-punk and darkwave. Beginning the night was a hard hitting DJ set from Rev. John, Angeleno goths may know him as the Das Bunker resident who plays some of the best EBM and industrial cuts in his set.

As the room began to fill up with a motley crowd of both young and old, people started dancing immediately as they heard the music being played inside the palatial theater, starting their night off to some great goth fare.

After dancing off the cauliflower crust pizza I had from next door (highly recommend), it was time for the young LA quartet Sextile to bring their snarling art-punk to the already packed crowd.

These guys were incredible, blasting through their set shrouded in dark red lights and a miasma of smoke covering them, which perfectly complimented their sullen but tough sound. The band played most of the material from their debut LP, A Thousand Hands (one of my favorites from last year) and it was galvanizing in a live setting.

Sextile recalls everything I enjoy about the 80s no wave. Acts like The Birthday Party and Bauhaus sound alive and well in this burgeoning band’s fresh take on an old style. Any kid rife with angst can do another Joy Division pastiche but Sextile cull the best elements from a very bountiful scene and come out with lurid, commanding music that they can call their own. Loud synth lines lead into feedback-laden static between songs as if to keep the tension high before the next song. A personal favorite of the set was “Can’t Take It,” this propulsive track just makes you want to sway your shoulders around like there’s no tomorrow.

I am happy I finally got to see these guys, I can not stress enough how much fun these guys are live. Next to perform was another Angeleno outfit called Gateway Drugs, whose sound was somewhat incongruous with the rest of the night’s offerings but still they put on an excellent set with their brand of lo-fi garage pop.

The ennui in the band’s lyrics was certainly tangible, even not fully knowing the songs it was easy to get lost in their surreal, fuzzy sound. The group played very well, especially their very talented drummer who played with white-knuckled ferocity. The openers for the night were certainly a reflection of how awesome our city’s scene really is, a simple glean from the abundance of acts will still get you great music. 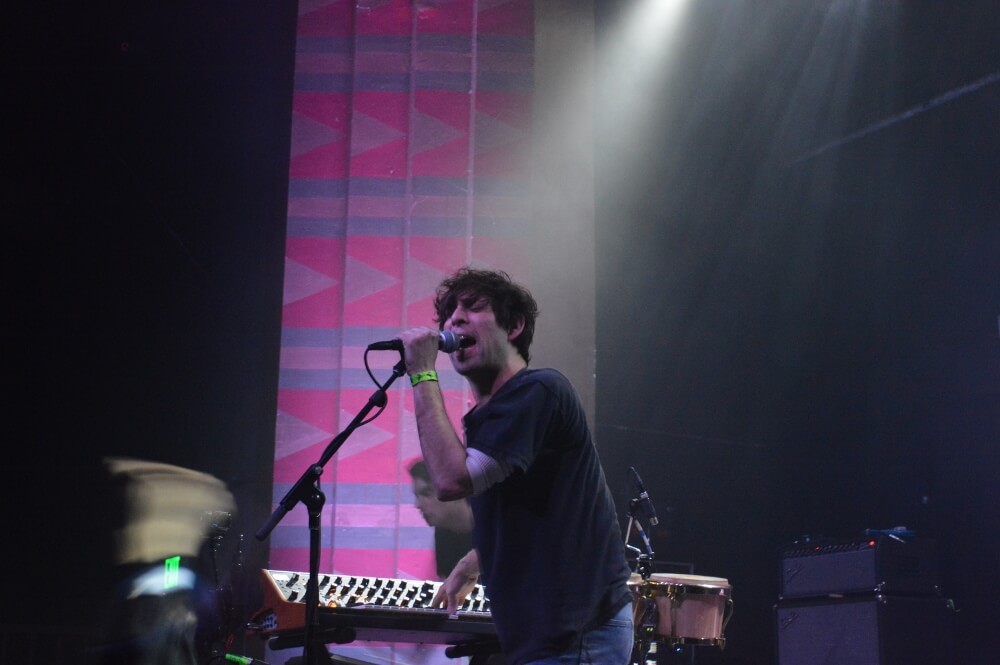 Finally, it was time for the set of the night, and that was from headliner The Soft Moon. The nom de plume of solo artist Luis Vasquez (performing live as a three piece), The Soft Moon’s visceral brand of atmospheric post-punk and darkwave is incredible live. I had the pleasure of seeing him last year after he came out with his much-lauded third album, Deeper, and the live set blew me away as much as it did when I saw him then. The lights went out as the three piece walked out one by one, then sent the crowd into a frenzy opening with the gritty, mid-tempo burner from Deeper, “Black,” which made all the hair on the back of my neck stand up from its intensity.

They perform as a three piece, but it feels more like a seven-member band because Vasquez was jumping between vocals, synth, guitar and even showing off some explosive percussion skills on bongos and a goddamn trash can throughout the set. For over an hour they powered through material from the three albums in Vasquez’s repertoire, from the neon-lit urgency of “Far” to the pummeling “Want,” there was never a dull moment in all of the harrowing tension built in each eerie tune. Vasquez’s voice, a succinct message from oblivion at one moment then a jarring shriek the next, was incredible even for the more laconic tracks in his catalog, plus his stage presence is unparalleled, especially jumping between the aforementioned instruments.

A personal favorite from their performance was “Die Life,” an ominous cut from his sophomore release Zeroes, which they performed in their encore. Their set reminds me why The Soft Moon is among my favorite acts; Vasquez takes the lexicon of Berlin-esque post-punk and industrial and it amalgamates into this unsettling yet inviting sound that borders upon oblivion willingly. Plus you will not see a live show as frenetic and exciting as his, if you get a chance to see him on this tour, by all means do so. Gaze into The Soft Moon’s sonic abyss, for it will gaze back into you.