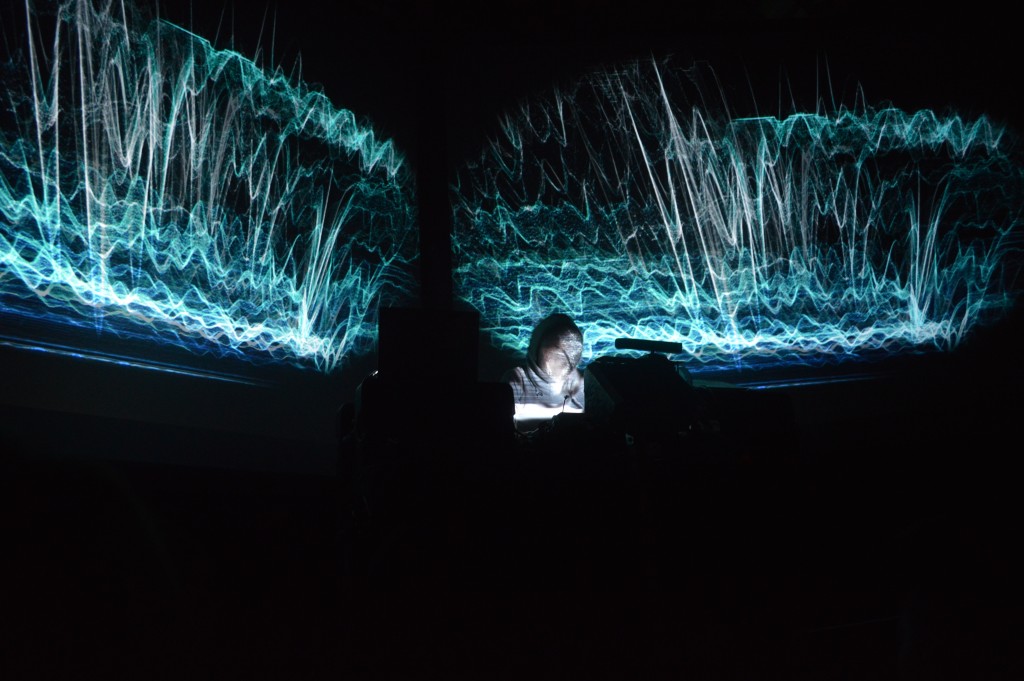 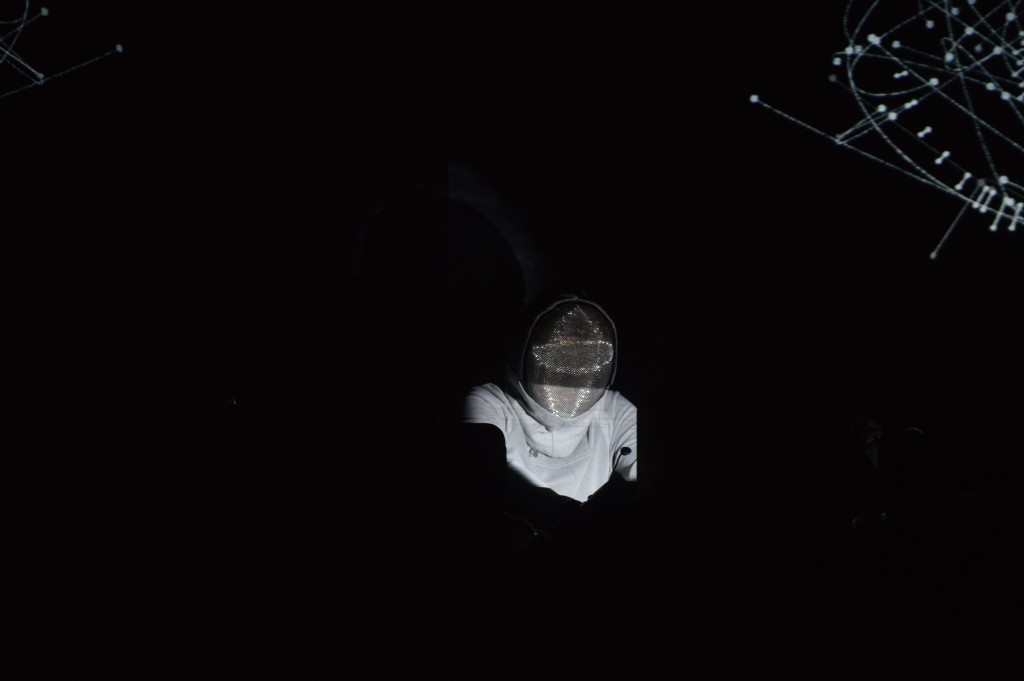 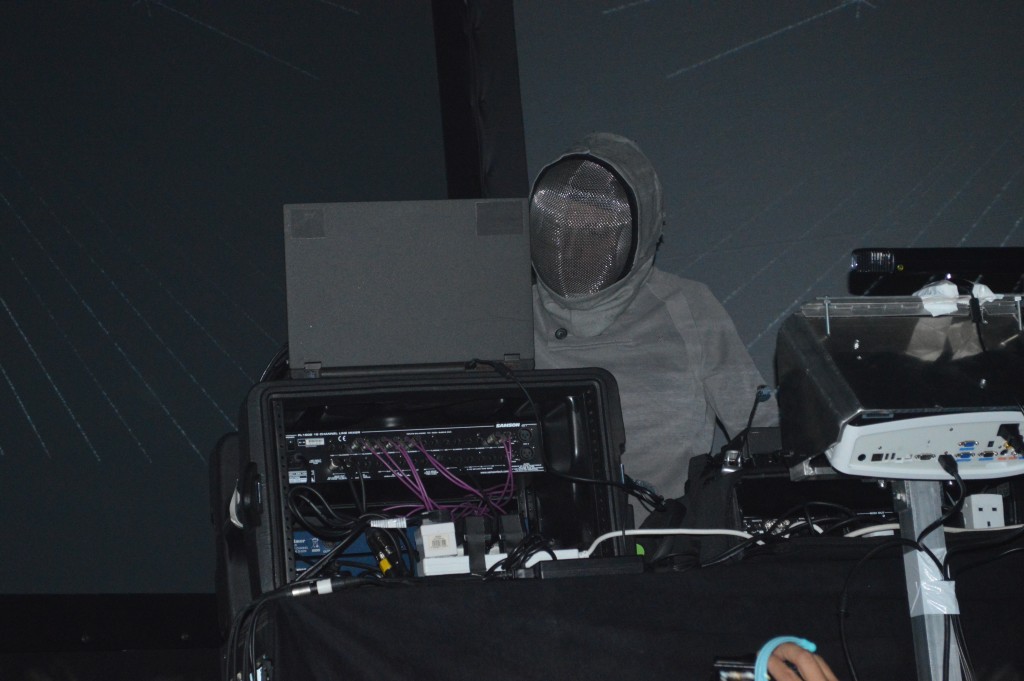 Downtown has some of my favorite venues in town, and tonight I got to go to one of the best, the Regent Theater off Main Street.

The Regent is aesthetically great; in being that it is spacious and has great sound. The night saw a loud, visually stunning performance from one of the most talented musicians alive, and that’s Electronic Music pioneer, master of the bass guitar and all around musical thaumaturge, Squarepusher. 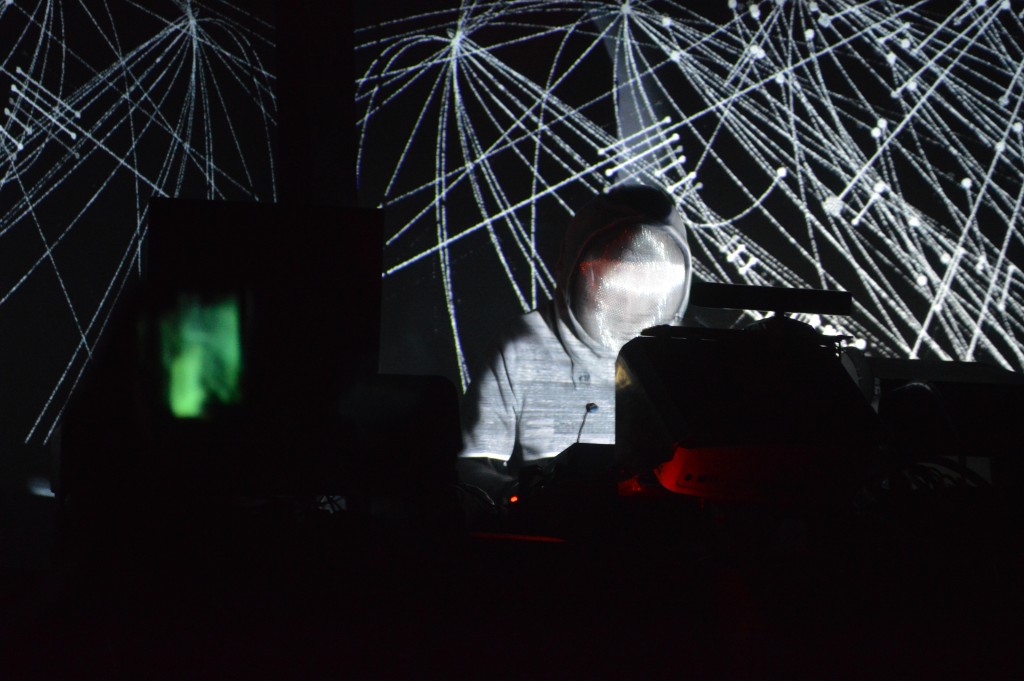 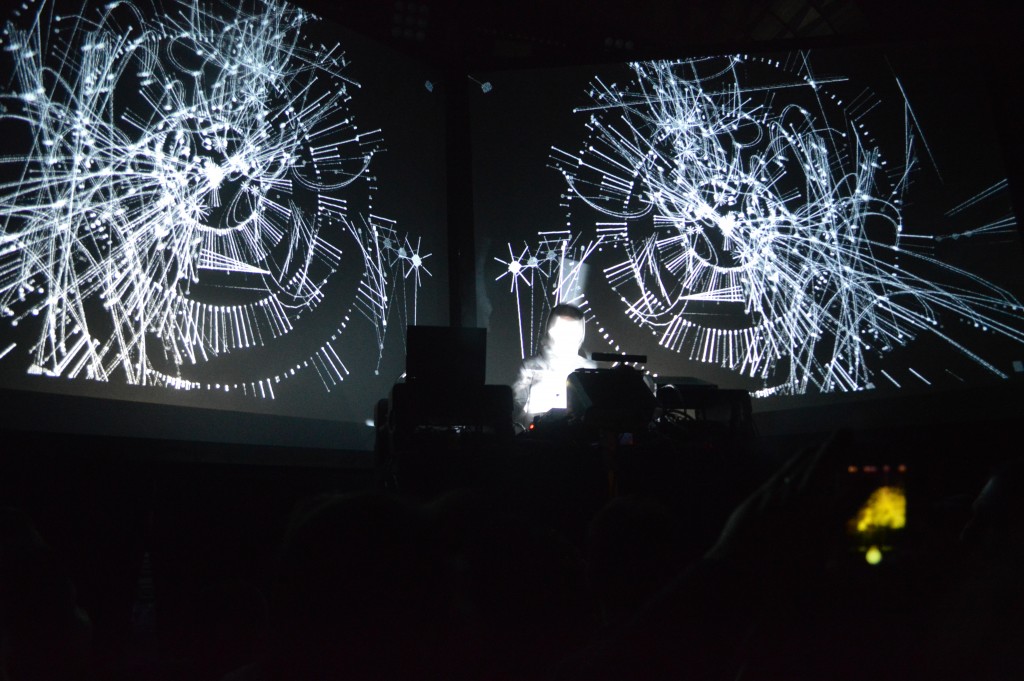 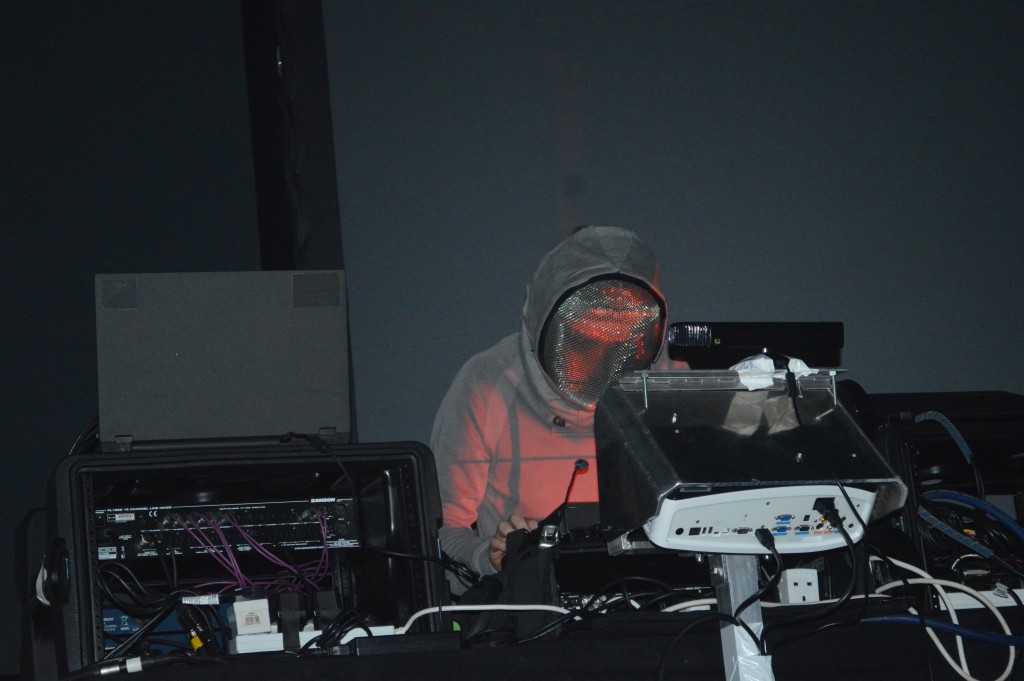 The first hour since the doors open was packed with garage and deep techno tunes from a back-of-the-room DJ, a tempo cut here, a wub there, good music to start the evening.

The age restriction on the show was 18 and up, because Los Angeles, but it was ostensibly pointless because even the seemingly youngest member of the packed crowd was probably older than the Clinton years.

This was my first time seeing Squarepusher out of a festival setting, which was Hard Summer in 2012, it was nice to see a very adult crowd at an electronic show, regardless of who was playing.

That meant a dearth of the gaudy ravers and their fuzzy boots and light gloves that all end up making me want to puke, as if I was on all the substances they apparently are. 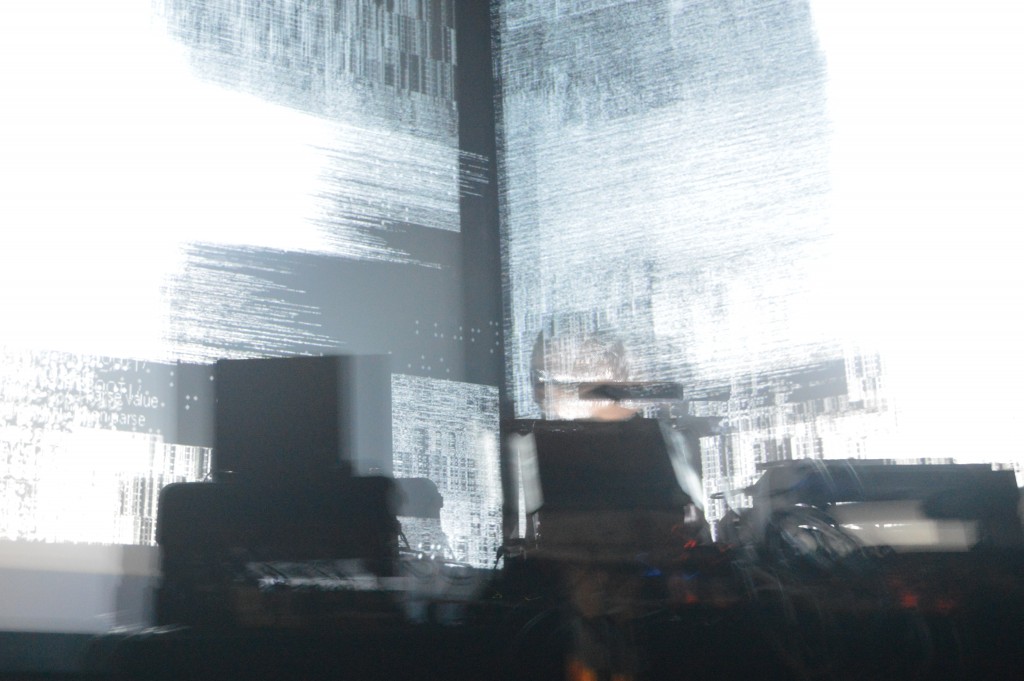 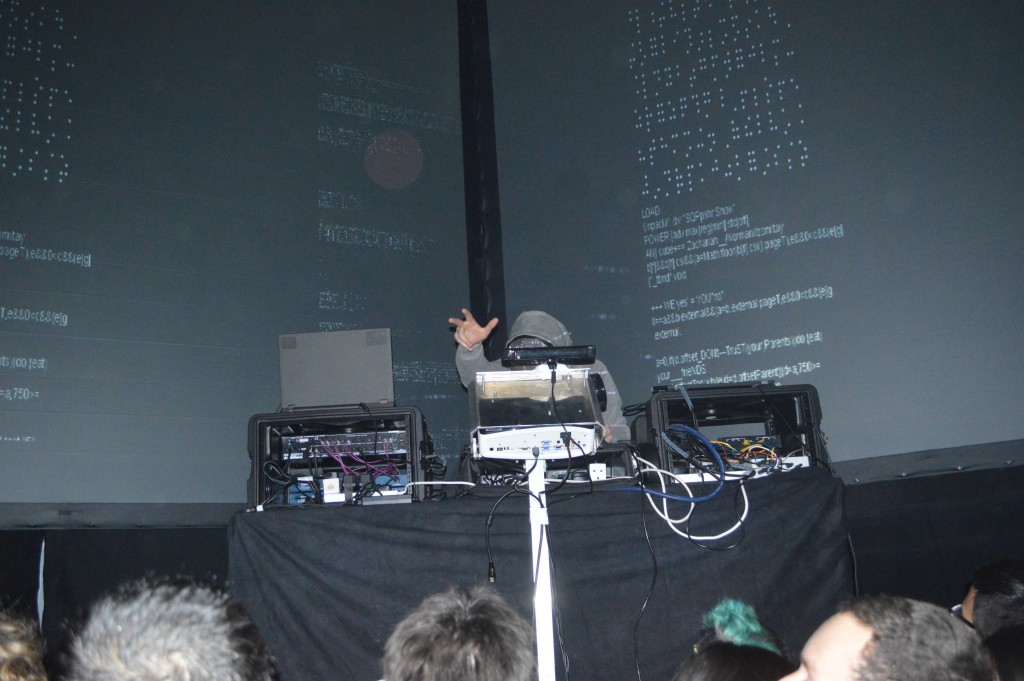 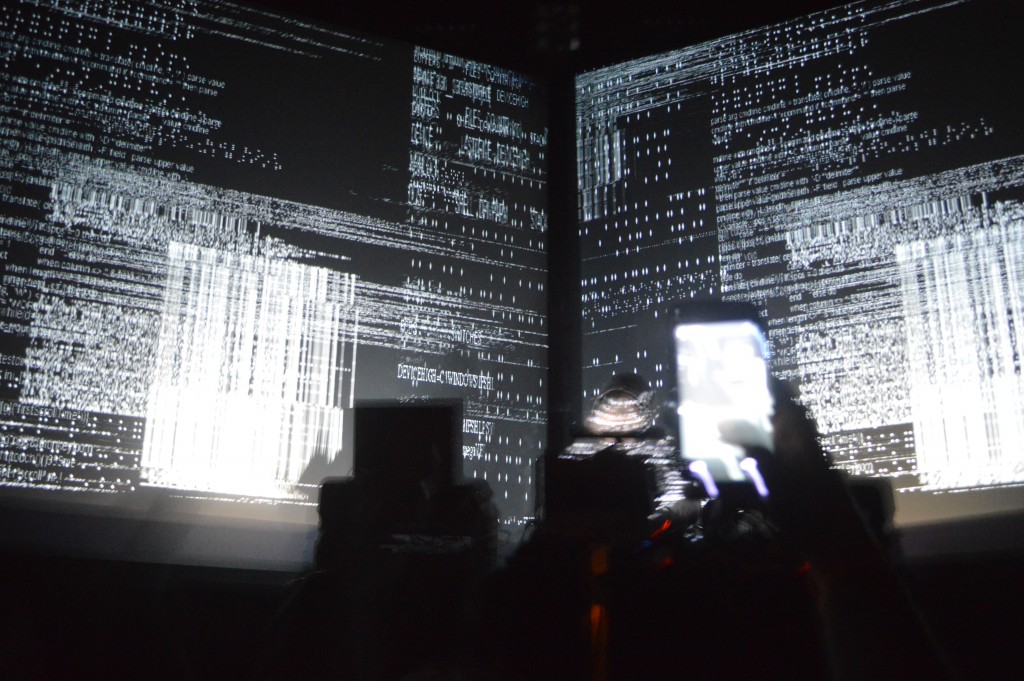 But enough picking on the PLUR kids, let’s get to the music. The opener of the night was an interesting choice, a very talented Lydia Ainsworth and her two string players gave an unexpectedly soothing performance, Ainsworth’s vocals bounced from mellifluous to over processed robot gibber amazingly, her cello and violin players perfectly complemented the withdrawn post-pop she was playing.

What made me happy was that people in the crowd were actually enjoying it, because we all know how much it sucks to be an opener sometimes, especially when you sound absolutely nothing like the headliner, but who would go see two Squarepusher’s?

The trio did an excellent job of getting the crowd pumped for the man himself. Warp records hero and personal favorite, Squarepusher.

Who is Squarepusher? A question that irks me as much as someone asking me “What’s a Star Wars?”, but here we go, Tom Jenkinson, otherwise known as Squarepusher, is a British musician who has been making cerebral Electronic Music for over 20 years and a staple of the legendary Warp records, alongside artists like Aphex Twin or Boards of Canada.

His music has evolved from the primordial stages Acid and Drum and Bass (none of that IDM s**t here) into the sound that can only be described as his own. Challenging traditional songwriting, including time signatures far different from the canonical 4/4 of Electronic music, his music is more comparable to Jazz than it is to other Electronic Music, it isn’t exactly post modern, post electronic or post what have you; it’s just reflective of his astronomical talent and fervor he has for his music. 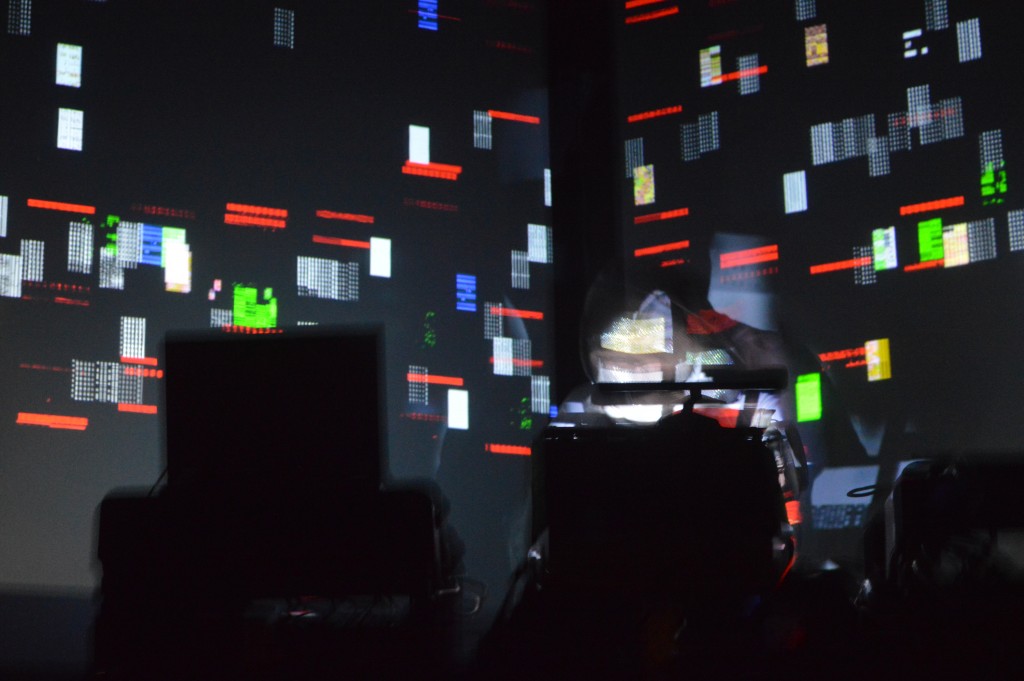 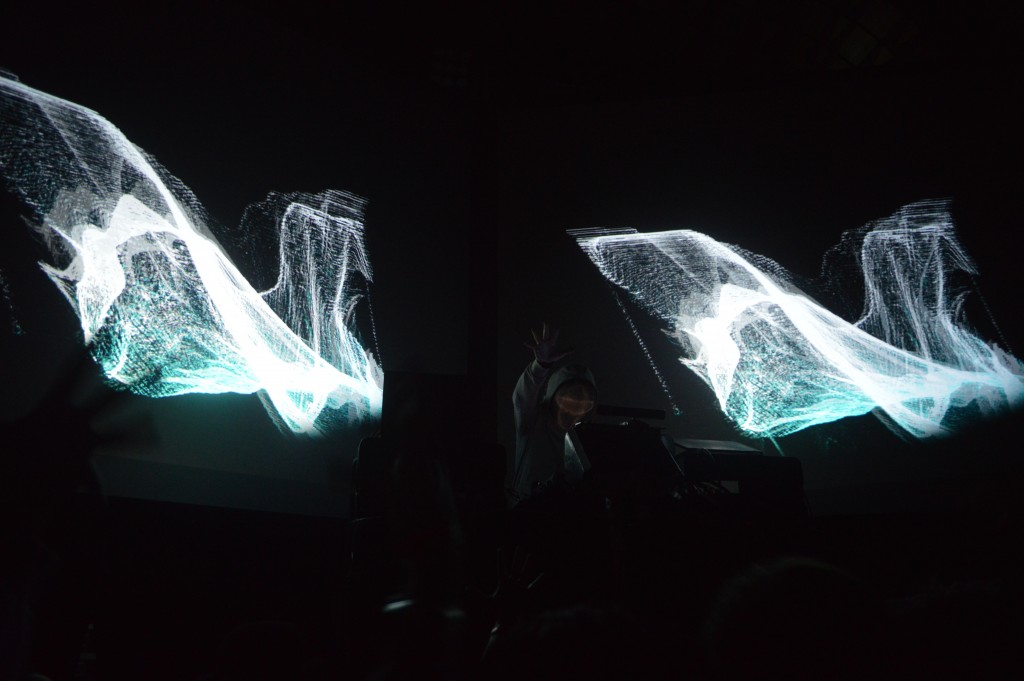 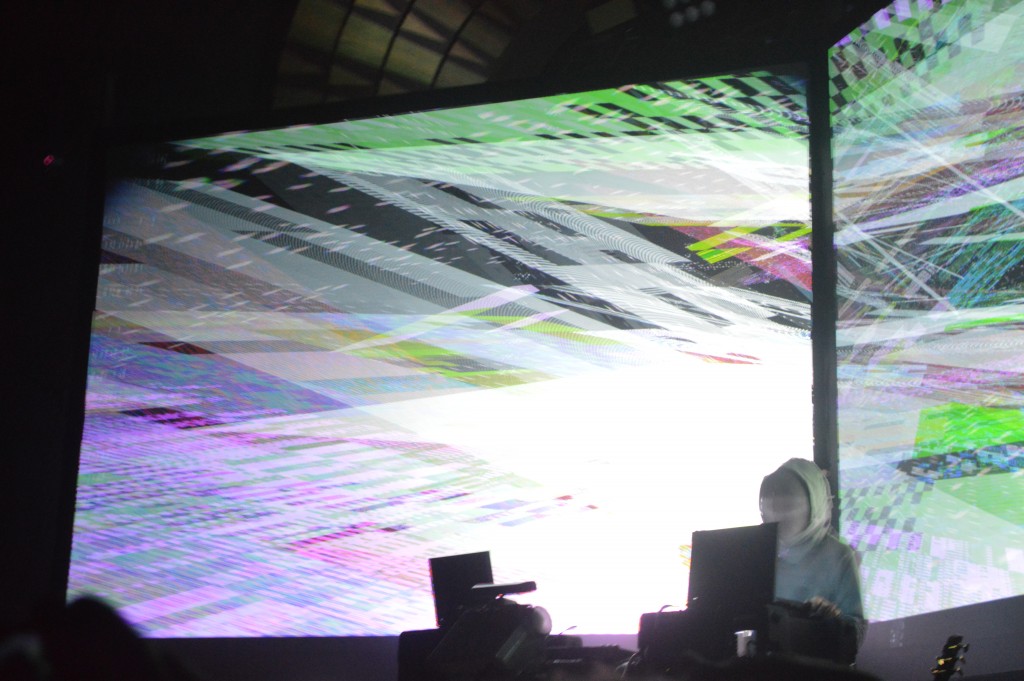 His performance, much like the one he did for his 2012 tour supporting his last album “Ufabulum”, was a juxtaposition of Music and visual art with Jenkinson controlling everything behind yet another mask.

This time it wasn’t the TV-head of “Ufabulum” fame, his outfit looked like a fencing uniform, but his bone-white form was a part of the visual show as well, while there were two perpendicular screens firing off visuals to the fusillade of sonic information that is his new album “Damogen Furies”, another projector was firing geometric shapes and lines all over his body. 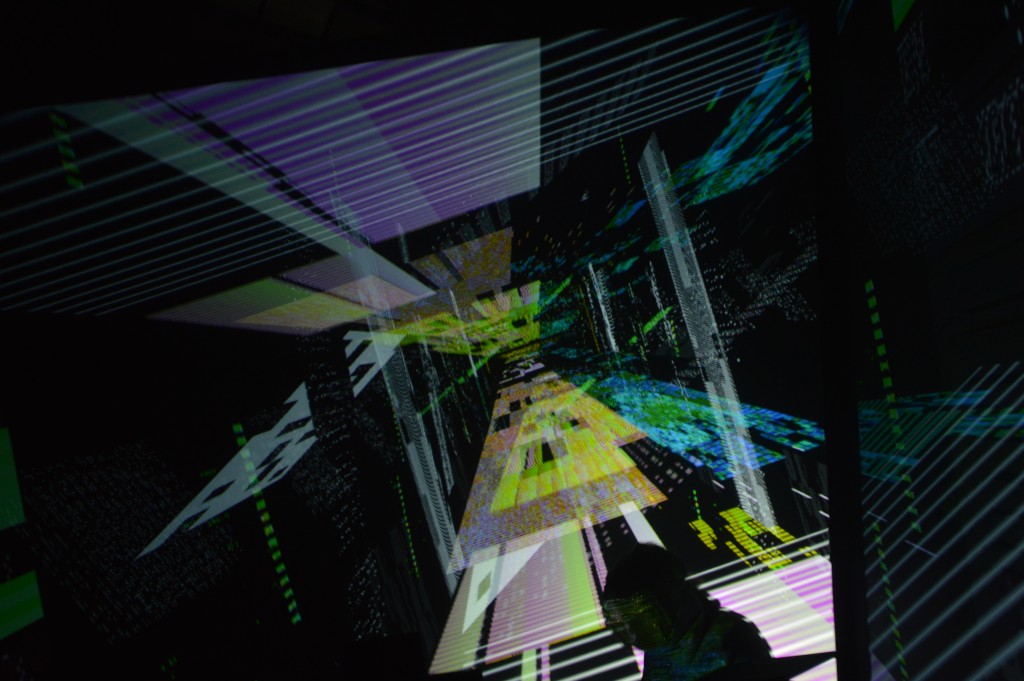 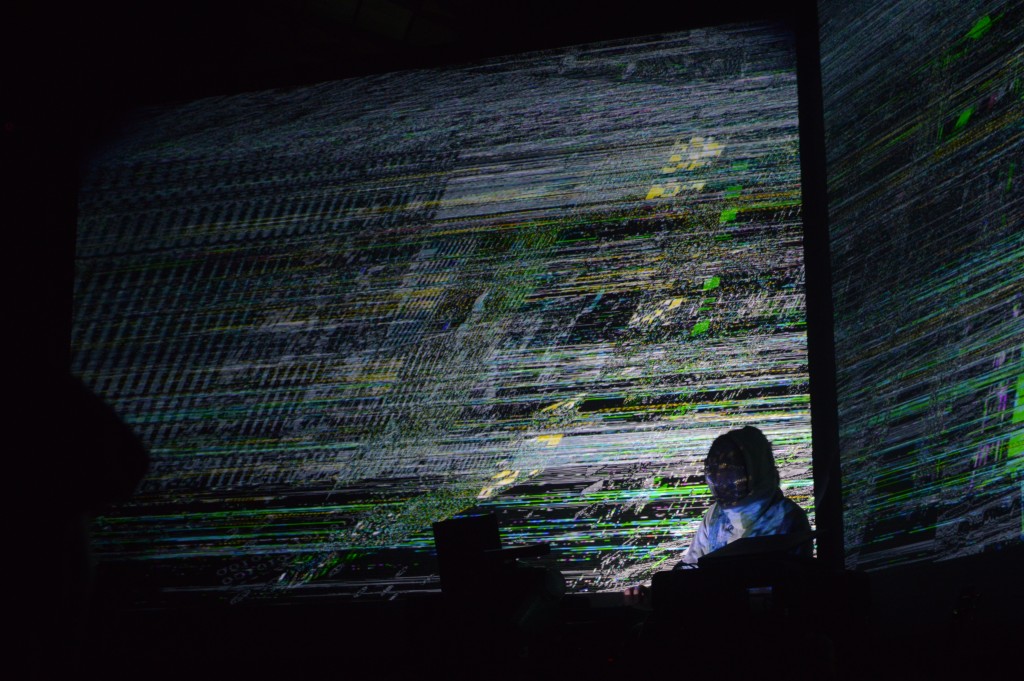 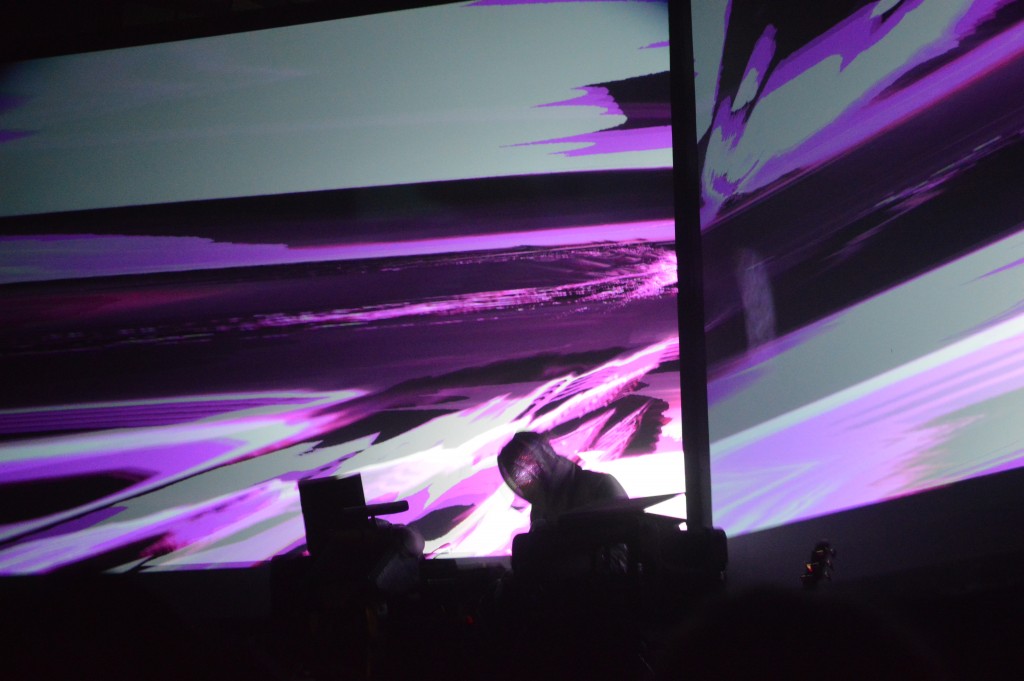 His set, from start to finish, transcended anything I’ve ever seen done before with a audio/visual performance, from the ominous pings in the intro to all the madness that followed, Squarepusher blasted through his new album, which much like most of his catalog, is seemingly chaotic, but meticulously crafted when paid close attention to.

Which is what people were doing during his performance, getting lost in the hyper-syncopations and melodic motifs he crafted.

This isn’t dance music, ostensibly you could dance to it, it looks hilarious when you do. Each song he played was a journey within your own mind, along with f**king awesome visuals to accompany.

Someone as forward thinking as Jenkinson doesn’t need to play the hits, this is possibly the best way you can “stream” his new material.

My favorite cut was the aggressive “Baltang Ort” with its Acid-esque synths and Jungle backing beat that was constantly evolving, like an audible metamorphosis into a distorted frequency that can destroy a planet with it’s power. 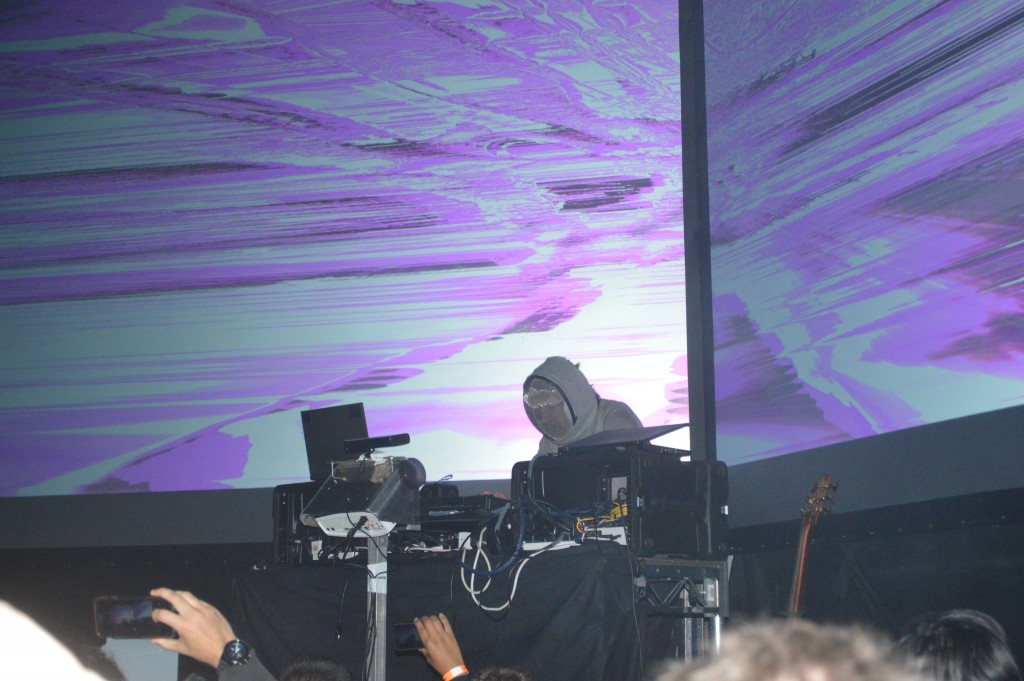 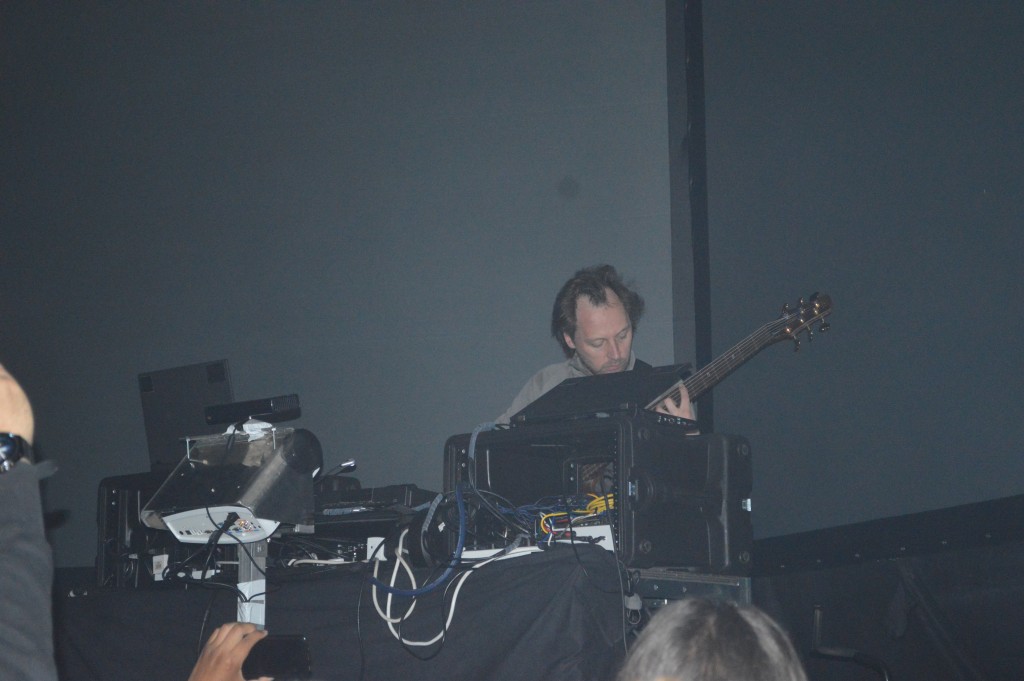 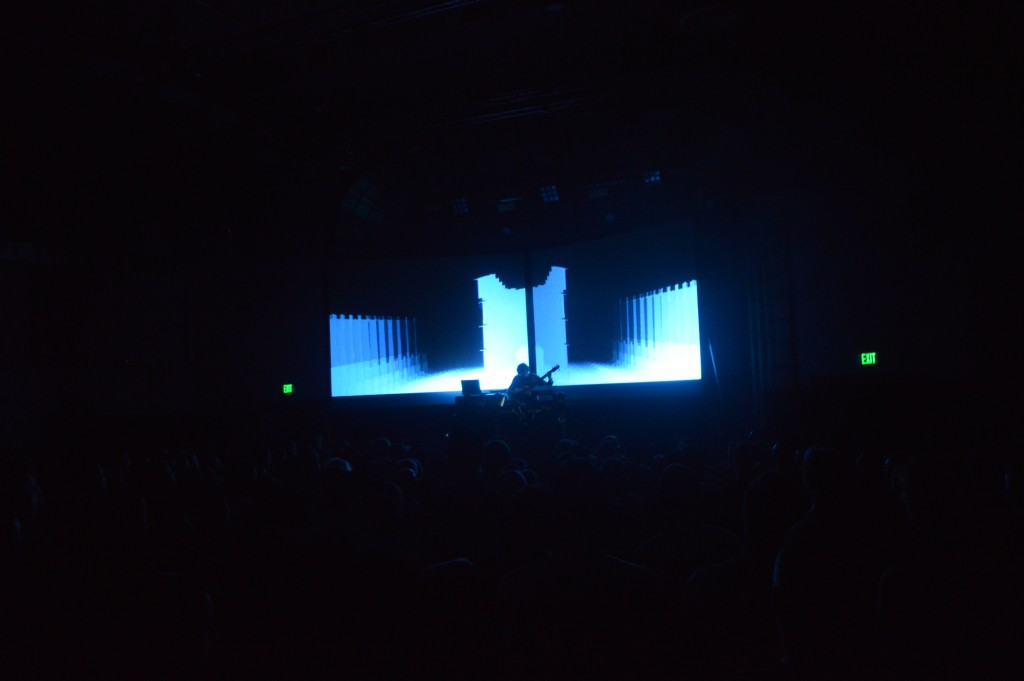 If everything he played is from the album, I’m already sold. There was never a dull moment, even in the quiet between songs was filled with clamorous clangs and screeches to keep the suspense high.

Though he excels at electro-acoustic, like his incredible yet highly underrated “Ultravisitor” record, which commingled analog electronics and heavily processed bass guitar without reproach, his solely electronic work is something to behold. 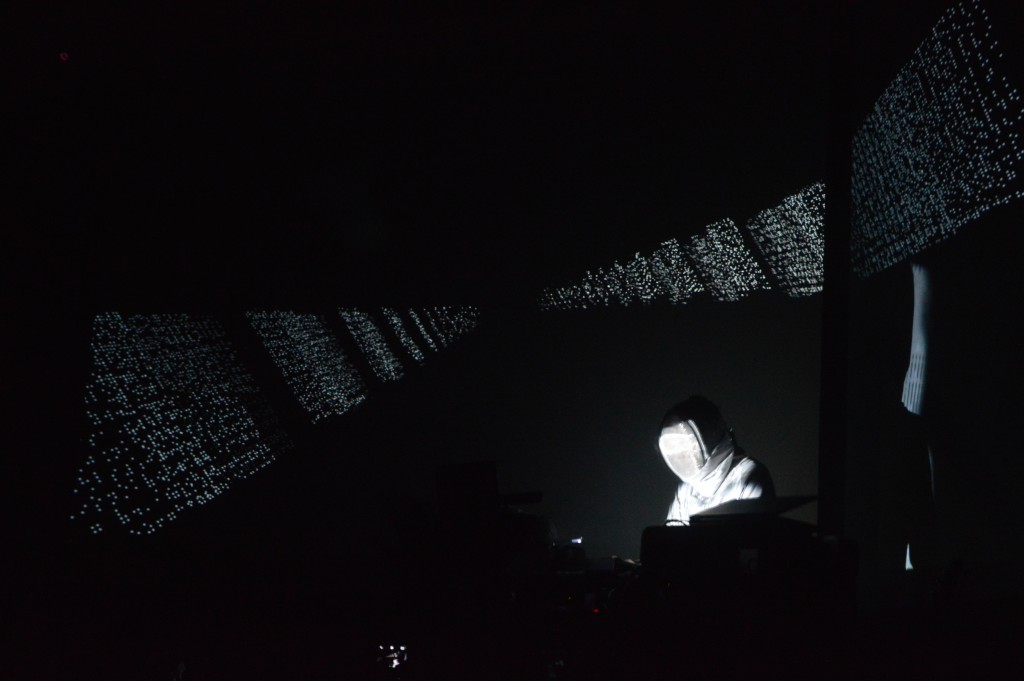 What made his performance truly special was after all the tension and wonderment his set left, he came back for an encore. This time without the mask and armed just with a bass guitar, the most powerful tool in his arsenal.

He went on to play a beautiful solo that could make even the most audiophilic classical fan shed a tear, he’s not some robot overlord like Daft Punk pretend to be, he isn’t trying making music of the future, he’s using electronic music as an extension of his unmatchable skill as an artist.

Now you can stream “Damogen Furies”, out April 21st, here, and if you are attending Coachella this coming weekend, be sure to catch the performance of the year.