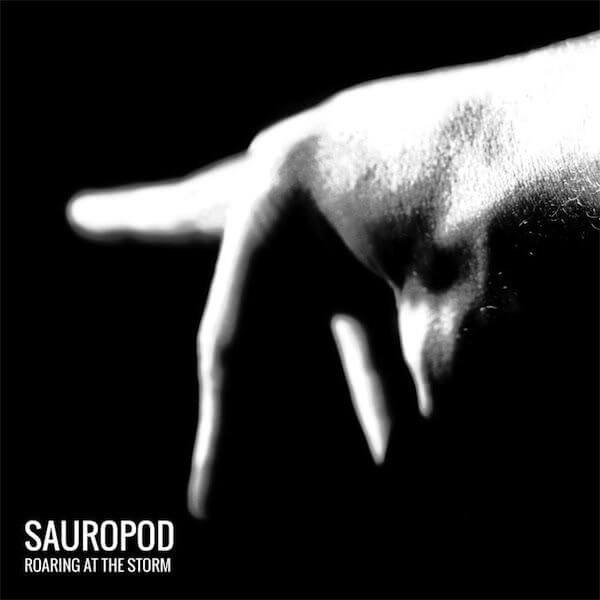 When Norwegian trio Sauropod released “Winter Song,” the first single from debut album Roaring At The Storm, we were treated to a delightfully heavy bit of melodic pop rock, complete with frenetic energy, a shoutable chorus and enough dynamic breaks to make Pixies blush.

Album opener “You And Me Should Leave Together Tonight” follows suit, highlighting the poppier side of 90’s college rock, but given the band name and the dark album cover, I was expecting something heavy, aggressive and punk. As the album progresses, it becomes clear that the band channel their focus into crafting tightly wound pop tunes with classic structures and chamber pop melodies, yelled at the top their lungs. Unfortunately, this is one of the few surprises the album has to offer.

The songs are short, well constructed, high energy pop punk tunes, with a few dips into twee pop (“Running Song” and album closer “On The Hill”) and a couple hints at metal (“Fugue” and “Headphones”).

While they have already developed a few identifiable tricks, most of the songs are sewn together with the same thread as all the classics we grew up with, making me think that the energy of a live show might give the songs the extra boost they need to be both fun and engaging.

What the studio versions of the songs do provide is high production values without coming across as over-glossed. The walls of crunchy guitars, fun effects, and tight arrangements make the louder tracks hit hard while the addition of gentle harmonies, glockenspiel and keyboards give the softer songs all the charm they need to be to be effective.

While many of the songs tell simple stories via vivid imagery, the lyrics themselves almost feel like pretty placeholders–something to justify the melodies themselves. In some cases, the optimistic imagery suits the band perfectly, while other times it feels confused.

On “Headphones,” bassist Kamilla Waal sings “I step right up to the candy shop/get some mints to cover up the gin,” a line that captures the bubblegum pop/punk dichotomy of the band beautifully.

On the other hand, the quasi-metal “Fugue,” finds guitarist Jonas Røyeng doing his best impression of a dark guttural whisper, but lines like “Stomping on the wet black leaves” sounds brutal, but really just give images of children playing in the forest. Moments later, he drops the metal inflection, singing “my mind’s at ease,” a statement that better suits the band but feels strange when contrasted with the chunky, distorted guitars.

Roaring At The Storm is a strong debut from a band with a lot of potential, and hopefully, they will find a more notable identity on future releases. In the meantime, their energetic blend of pop, punk and rock should satisfy the needs of those looking for quality songs, strong melodies and crunchy guitars. If you get a chance to see them live, I have a feeling the songs will work wonderfully in a dingy club.