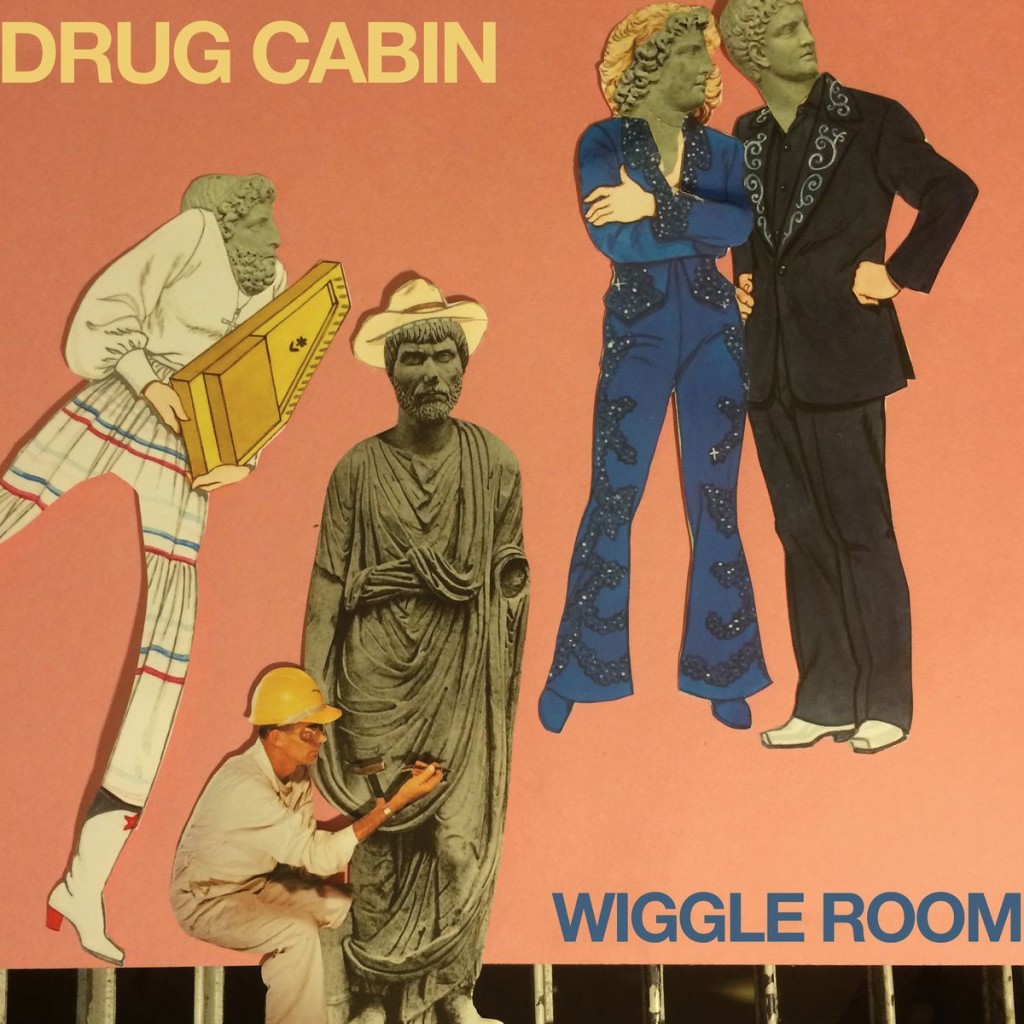 Drug Cabin is part of the wave that has softly landed on the shores of the Los Angeles indie
scene that echoes the 1970s singer-songwriter artists and soft rock bands like Steely Dan, Chicago, Todd Rundgren, and Neil Sedaka. Drug Cabin’s third release, “Wiggle Room”, is teeming with mellow grooves and clean guitar chords on all 12 tracks. It is essentially a release of an additional 12 songs Nathan Thelen of Pretty Girls Make Graves and Moonrats and Marcus Congleton of Ambulance Ltd. wrote and recorded with Brandon Owens on bass, Sheridan Reily on drums, and Frankie Palmer on pedal steel that was mixed and produced by Nick DeWitt to the songs they released in February of 2015 as Yard Work.

The album opens with a mellow song titled “Handsome.” It has a very relaxing, easy listening feel to it. The melody is calm and sweet and has a slight later Beatles sound to it although it may not stick with you in the same way a Beatles tune does. The album’s 2nd track, “Wiggle Room” continues with more of the same energy. It’s another mellow song that comes through your speakers like a cool breeze and ends with the same peace it arrived in. “Ruby” picks up the pace slightly. It the dreamy vocal lines mix with a nice rhythm to the chords. Its more Strawberry Fields and more sweet-sounding harmonies from start to finish. The chorus has a nice
ring to it and stays with you, or at least it would if the next song wouldn’t get your attention so fast.

If any song on the album would have been made into a 45 and a 12” single to be sent to all the DJs in 1974 it would have to be “Legends.” It is without a doubt the best song on the album. The chords are creative and work perfectly with the melody. The song falls on your ears smoothly like a drip of honey and the chorus catches and sticks in your mind the same way a small fragment of a baby bird’s feather clings to crushed velvet, ever so gently. It ends with the whole song sounding as though it were put through an echo chamber or recorded in a massive cavern in characteristic LA Reverb-loving style. “Beverly Glen” brings us back to Drug Cabin’s characteristic dreamy harmonies and smooth swaying rhythm explored in the first couple songs on the album.

Following this song is “Steely Dad”, which very much echoes the Steely Dan influence in its clean syncopated rhythm of the guitar chords. It is one of the other more catchy songs on the album for this reason. Although I am not entirely sure just how many young indie kids in their early 20’s pay enough attention to 70’s major label acts to get the pun in the title but perhaps there are more than a few. “Easy” is very much as the title of the song implies: another nice, chill song to relax and perhaps smoke some pot to. Coming in at track number 8, “Wonderful” is very much a sweet-sounding song that has a brief cuss word in it to shake things up slightly and makes a nice smooth transition to the next song “Emily” that continues taking the listener on a similar dreamy melodic ride.

“Stoner” breaks away from this mold with its reggae influenced rhythms and catchier vocal lines and is certainly a step higher in energy that than the previous couple songs. “Turkey Time” brings us back down with its sweet pedal steel introduction that leads into a folky, almost country sounding song with a nice chorus to it.

Finally, the album ends with “Space Program” which is essentially a mostly instrumental jam peppered with a couple of sweet harmonic lines every once in a while. “Wiggle Room” comes in just above 31 minutes. It is over almost as soon as it began. It is a nice little collection of easy to listen to folky pop songs that one could play in the background of a nice wine and cheese party with guests of all ages present. No one would be likely to be offended by much other than
perhaps the name of the band if they are particularly conservative and their squeamish in their feelings about substances. However it is the 21st Century and it seems very few people really care so much about what artists calls themselves as long as they have good content. Drug Cabin would certainly be considered to be in the same sort of musical vein as the Allah Las or even the Growlers in their pursuit of a melodic Sunbaked, and probably Somewhat-Baked Southern California sound. Overall was a very listenable album, the band certainly can write some nice songs. As a whole it lacks some of the variety of their earlier releases but is still very much a solid record.

Shahs of Sunset stars detained on visit to Israel

Clare Crawley and Dale Moss’ astrological signs are super compatible despite having...