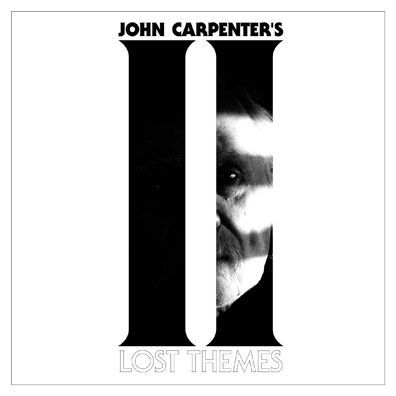 John Carpenter, the horror auteur responsible for classics including Halloween, The Thing, They Live and Escape From New York has always had a hand in the sound of his films, often gracing them with haunting, minimal synthscape soundtracks that in and of themselves have become as iconic as the films they belong to.

But how would the music hold up when stripped of the visual aspects, the characters, the monsters and the suspense?

Last year’s Lost Themes showed us he was just as capable of creating worlds with sound alone. Revitalized by the experience, he returns with another spooky, synth-driven suite.

It’s amazing what time can do to sounds – the palette on offer is chock-full of pulsing synth basses, chiming arpeggios, spooky synth warbles and cliché, over-distorted guitars.

Thirty years ago, this would’ve sounded cutting edge. Twenty years ago, much of the album would have been heard as offensively dated.

Today, removed from most current trends and technology, the album is warm, nostalgic and inviting. But can 45 minutes of instrumental kitsch satisfy today’s attention-deficit audiences?

With an experienced, atmospheric mastermind like John Carpenter at the helm, the answer is an enthusiastic yes.

Distant Dream opens the album loud and dramatic before breaking into a driving synth bass sequence that dynamically builds, percussive with broken sounds that skitter about before bombastic drums come crashing down, a sound befitting the opening scene of any big action flick.

It’s not until the three-minute mark that the drums drop into a straight-ahead groove that proves how good this stuff would sound on a dark dance floor.

White Pulse is a return to the now classic, haunting minimal arpeggios of the Halloween theme, with a newfound orchestral beauty that shows what Carpenter can do when not tied to a picture.

His structures are surprising, modular and focused – after a minute or so of the pretty synths, the whole track warps into a hard hitting industrial track, with distorted drums and sea-sick synth pulses before breaking into a tragically heroic coda that’s one part old-school Zelda melodies and two parts big screen drama.

This pattern continues dynamically, building and breaking through dark atmospheres, deep grooves, introspective arpeggios and simple, evolving melodies that are triumphant enough to balance out the darkness without ever letting you feel like you’re out of the woods – remember, the villain always comes back at the end.

Thoroughly enjoyable, there’s plenty here to get lost in and more than enough to keep it interesting. What’s better, each arrangement succinctly fulfils an emotional arc then gets out before you can get bored, seamlessly drifting into the next scene/song.

What’s most impressive is that the album feels like a cohesive whole, acting as a cinematic experience for the ears.

While there’s no explicit story given, the seemingly random, almost half-assed song titles give your imagination just enough imagery to run wild and create its own story, complete with characters, scenes, action, drama and suspense.

Surely, Lost Themes II wasn’t composed with an underlying plot, but Carpenter’s decades of experience writing, directing and scoring classic films has clearly informed his approach to crafting an album.

While one may argue that once you reach the halfway point, there are few tricks left for him to throw at the listener, resulting in a rather “same-y” second half, I’d respond that a movie would be irritatingly inconsistent if each scene was shot with different actors and a new palette.

Lost Themes II should be approached in kind, with the last chunk of the album allowing for the various themes to reconcile themselves and meet a cathartic conclusion, complete with a synth horn, theatrical string figures and epic, thundering rolls from a timpani.

While certainly not for everyone, Lost Themes II is a more than worthy sequel that is sure to resonate with fans of atmospheric synthscapes, moody soundtracks and Carpenter’s cult following.

It’s an engaging, cohesive experience with enough depth and texture to satisfy repeat listens, and given it’s succinct, uniquely cinematic approach, it certainly pays to turn off the lights and get lost in the music.