At first impressions, the NAMM show is a bit of sensory overload. Music companies in the fields of guitar craft, accessories, strings, pro-audio, synthesizers and so on, all coalesce for the largest trade convention for the music industry.

The National Association of Musician Merchants (NAMM) puts on annual conventions all around the world, but at the convention center in Disney’s backyard, Anaheim, everyone from around the world fill Mickey Mouse’s domain to network, make promising business deals, show off new products or just are flat out looking for a job.

From heavyweights in the industry playing show and tell with their awesome new toys (Fender, Casio, DW etc.) or to small companies looking for distributing partners or investors (Freedom Guitars Research, Marco Bass Guitars, Riversong etc.), the convention was a hodgepodge of thousands of music companies with an astounding collection of innovative pieces of equipment.

Though being both a huge music nerd and a bit of a musician, the NAMM milieu was something I had never really been exposed to, in fact this was a whole side of the music world I had never really seen. You buy the amp, guitar or the DJ mixer, but you never really feel impelled to understand what drives the companies that make your equipment.

After speaking to countless exhibitors from established companies and up and comers the past couple of days, I see in all of them a fervent passion for what they do.

It was awe-inspiring to play with and or geek out over incredible innovation at every corner in the gargantuan convention halls.

Verily there were companies trying to pass off tawdry instruments that pastiche other existing models, plus if I have to go through Alibaba and order 50 bass guitars when I only wanted one, it sounds too precarious of an endeavor.

For the sake of brevity, and context, these three exhibits were my highlights from NAMM:

I have been a huge fan of these guys headphones for years, back in my DJing days their Crossfade ‘over the ear’ headphones were my weapon of choice, with a strong metal build, sleek design, a kevlar woven cable but most importantly impeccable sound quality that captures the low end frequencies when I needed to hear the beat while I was spinning.

At this year’s NAMM they are showing off a new model of the Crossfade called the Crossfade M100, which sounded amazing when I tried them, the quality is even a jump up from previous models “[V-Moda Crossfade M100] have better drivers, they’re also way more compact, they fold up so you can take them anywhere a little easier,” said V-Moda exhibitor David, “…they also have two imports so you can plug it in either side versus one side on the [original] crossfade, also if you want to get crazy plug in two devices to get a mix in headphones.”

As quixotic as that sounds, it actually works! These headphones have killer sound, they gave the sound drivers balance so all three bands (treble, mids and low end) can be in perfect poise, not only is the quality in the sound, it is also in their aesthetic.

With sleek metal plates on the side that can be fully customizable to have any color and or logo on each platelet, even logos of the user’s own design, which is a must for DJ’s who have their own artwork. V-Moda has also developed a mic-cable attachment that makes the Crossfade M-100 a potential tour-de-force in the gaming headphones scene.

Though I was bummed to not see a followup to their incredible Vibrato ear buds on display (which I also own), I was relieved when I was told plans for new in-ear phones were on the horizons (though official announcement TBD).

The V-Moda Crossfade M-100 were definitely my favorite over the ear headphones at the NAMM show.

The proverbial Apple of the DJ and pro-audio industry have done it again with the XDJ-RX, these guys in the span of 15 years have revolutionized the world of modern DJing, with their insanely versatile digital turntables known as CDJs or their multi-functionable DJ mixers (DJM, if that isn’t too confusing), these guys are undeniably the top-dogs of the high end DJ equipment game but they’re still as voracious as ever.

Pioneer have come to NAMM debuting their new DJ controller/stand alone mixer, but don’t let this unsavvy railbird explain how it works, instead a Pioneer exhibitor artist showed me the in’s and out’s: (filmed with my Nokia Lumia, forgive the skinny presentation)

Along with the XDJ-RX, they are also debuting the XDJ 1000 multi-media player, which is an hermetic new variation of their digital turntable. Plus HDJ2000 headphones for DJ performing and their first pair of studio headphones, the HRM7, a promising addition to the studio production market. 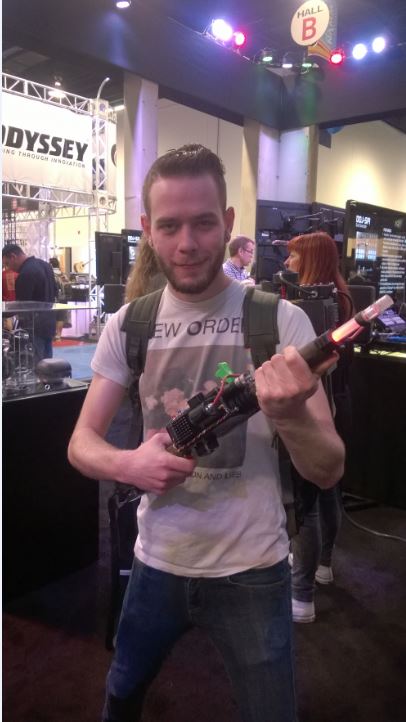 Another cool aspect to their exhibit was two customized CDJ’s transformed into awesome art pieces made specifically for the show (photos above).

Designed by cross media artist Jesse Graves for the convention’s Art Mix contest. What is awesome is that both the ghostbusters pack and the RC car are fully functional as CDJ’s still!

I always wondered what went into the artistic presentation of an exhibit for a music company, luckily, a very busy Jesse popped by the booth and elucidated his perspective for me:

“Everybody has their own style, the definition of art is to stimulate an emotion or stimulate a response, it could either be a good response or a bad response, some people could like it or some people don’t like it but ultimately I like the diversity; I see a lot of diversity here and that’s what we’re trying to do is keep it changing up and keep it from being stagnant.”

Along with their incredible DJ controllers the DDJ-SZ and SX2, which have been out for the past year, the XDJ-RX prove why Pioneer DJ products are still the best on the market.

A year after the amp/pedal company’s team up with Yamaha, Line 6 come this year to NAMM with the amazing Variax guitar celebrating the union, with the stellar guitar craftsmanship of Yamaha commingled with Line 6’s adroit engineering, this is going to be one of the top guitars on the market.

It can recall the sound of vintage guitars without the buzz and hum of a guitar being a little too vintage.

What excited me most was their new Firehawk FX multi-pedal, a fully customizable amalgam of all of the excellent Line 6 pedals.

But yet again, don’t let this inexperienced music nerd (and lazy bass player) explain, I hand it over to the very helpful Line 6 product specialist Nick Bell:

“The Firehawk FX is our newest HD multi-effects, it really includes the “best of” features including 200+ amp models including HD, also what’s another best of feature is the color-coding system we have going on through footswitch one and footswitch five.

Green being Delay, purple being modulation, these are colors any Line 6 user will be familiar with because from [M-series] to the [DL4] those color codes have been sticking around with our products for quite some time. Looking at the back panel of the I/O (In/Out) we see that we have the Variax input, what’s great about that is that this is our first modeler, or than 500x , that’s going to give us control of our Variax, giving us different tunings and models because a lot like [amplifi] we’re able to search up tone-templates.

So if I’m looking for a Van Halen template I could pull that up on my iPad (yup, they’ve got an app for that), make some tweaks, send it to my pedal-board and once I have all of my effects ready to go I could just leave my iPad at home and take this (Firehawk FX) onto the road with me, I could see where my effects are and switch through them, it’s a lot of fun and it makes it really easy.

What’s cool is that I could plug in an [extra] expression pedal and I could send my delays and [my] modulations to my actual expression pedal so if I want some more delay to come in or some more reverb, any effect at all, I can send it to one of these pedals… Every guitar player is different, so this gives the guitarist the ability to customize your set-up any way you want.”

You get all that? You better because these guys make some of the best pedals out there, having played with guitarists who use Line 6 pedals in addition to being given such a didactic presentation from Nick, I’m on board with Line 6. Not only with FX pedals, their amps and now guitar from their consortium with Yamaha make them an unstoppable leviathan to be reckoned with.

Enjoy some photos I took while I was there for media day: