Then, again, so are many corporations. 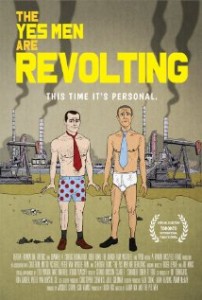 When Yes Men Andy Bichlbaum and Mike Bonanno launched their “Survivaballs” into New York’s East River to protest the lack of an effective United Nations climate change policy, they were not surprised when legal action ensued (“Yes, just stay to the left of the machine gun…”). In fact, they have been threatened with law suits dozens of times, although all have been dropped, so far.

In this film of the irrepressible hijinks of the two reigning kings of the political prank, The Chamber of Commerce initiated yet another law suit in search of revenge for the Yes Men’s imposture of Chamber executives. Designated “Public Enemy #1 of sane climate policy,” the Yes Men pronounced a striking new stance for the Chamber and its many member corporations. Namely, they would all “go green” and reverse their pro-business stance to favor environmental policies.

Yes, there are probably some grounds for fraud in the pranks pulled off by the two. Even so, the pure charm, courage and, at times, outright lunacy of the acts carries the day. The Yes Men do not falsely report what business leaders and worldwide fat cats say, they go far beyond that. They impersonate the top political and economic leaders of the world and say what, in the Yes men’s opinion, they should be saying in the first place.

Such as Canada making climate debt reparations to Uganda in compensation for the global warming caused (OK, indirectly) by the mammoth energy intensive oil recovery operations of the Alberta tar sands. The Yes Men built a replica of the podium at the UN Climate meetings in Copenhagen (out of cardboard boxes and pipe cleaners) and commenced to promise the reparations.

As the team puts it, although the unbelievably massive tar sand mining represents a small impact to Canada, it causes a major impact to Uganda and other developing countries where critically fragile farm output is hamstrung by drought and high temperatures.

The Survivaballs were first launched in 2006, when the two, posing as Halliburton representatives, demonstrated the effectiveness of the inflated, floating balls. Each one holding one person, the balls could float for days on a planet flooded by irreversible global warming. Using a term sure to be recognized by the world’s rich, each ball becomes “a gated community for one,” ensuring the survival of the richest.

By the way, Mike Bonanno and Andy Bichlbaum are not their real names. They appear to teach at two well-known American Universities, which may have had a say in just how public the two were allowed to go in divulging their real lives.

This is the latest installment of the outrageous “What if” scenarios that have put their names on the map (and at the corporate bulls eye) for the last twenty years. Their third movie (after “The Yes Men” and “The Yes Men Fix the World”) opened at this year’s Toronto Film Festival. The film not only recounts their chief accomplishments of the last few years, but it also checks into the personal lives of the two activists. As it turns out, being a political prankster is not always as glamorous as it sounds. Well into middle age, both are forced to re-examine the difference they are making and the ways and means required to raise a family and maintain a household.

Even if there is no such thing as an easy day for the Yes Men, arranging the faux gift of a polar bear to the Netherlands from Russia in thanks for the environmentally dubious Shell oil rig that went aground in Alaska, has to make it worthwhile. The Yes men have taken on a giant adversary in this, their latest, movie. Climate change may prove to be as unstoppable as it is controversial. The stakes are sky high and even the average person on the street may well turn their back on climate change mitigation if it costs their job.

The Bachelor star Peter Weber and Madison Prewett call it quits after...

Recap: Real Housewives of New York, Manhattan’s a Ghost Town in Summer...
Sign up for our Movie newsletter!