It tells the story of their rise to fame in the late fifties to become the top group of the pre-Beatles era.

They shared a fascinating backstory, personally and professionally, including run-ins with the Mafia and tumultuous love affairs and the effects of stardom.  And those songs! The musical numbers will knock your socks off.

We come out of it loving the Four Seasons and their music even more.

John Lloyd Young who originated the role on Broadway in 2006 plays Frankie Valli, and Jersey Boy veterans Erich Bergen plays Bob Gaudio, and Michael Lomenda as Nick Massi.  We spoke with the actors in Toronto: 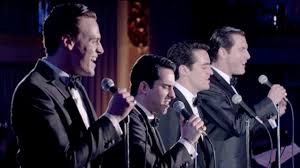 You’ve all been in the Jersey Boys business for a long time.  What keeps it fresh for you?

Erich Bergen – It’s the fans and audience! There’s no one time only Jersey Boys.  You never hear people say “Oh I saw that once”. You hear them say “I saw it and then went back and took my mother”.  It has kept audiences coming back over and over and over again.

John Lloyd Young – It’s the fans but it’s also that fifteen year old kid who wants to be on Broadway someday who is in the audience for his birthday and you’re giving him everything. And couples celebrating their anniversary. You’re not going to walk through the role when you know those people are in the audience.

Michael Lomenda -I’ve never done a show I’m more proud of and more ownership over which is a great thing.  There is something about the Jersey Boys juggernaut that you just invest in as an actor. Lots of actors dream of doing it and when you get that coveted role, it’s a thrill.

And of course Clint Eastwood directed the film.

JLY – He’s’ an actor and it’s just so apparent when you’re an actor working with him because he understands why you might be nervous, he’s been there.

He’s had some bad directors and he knows what a bad director can do to an actor and the ill effect he can have. So he compensates for it.

For example he has this habit on set.  He doesn’t say “Action”.   He saw while working on westerns that when the director said “Action” the horses tensed up.  Clint realised people did too!

So we’re talking and he says “Let’s go” and you don’t get this tension before the scene starts.  He has all these subtle things he does that put actors at ease and there are dozens.

ML – We were spoiled. Having him direct our first movie if you had told me I wouldn’t have believed it.  I asked one of the actors what the best experience he’d had working on a film was.  He said “This one!” I said “You’re kidding!” and he said “No, for you boys, it’s all downhill from here!”

After all this time do the roles still challenge you as actors?

JLY – It’s an actor’s playground with drama, comedy, and you get to become a rock star, to go through a lifetime and mature as a character and you get to talk right to them.

It’s a pure connection to the audience, the fourth wall is broken. Each of us gets a turn onstage talking to them and I’m happy Clint Eastwood retained that from the show.

ML – that keeps it fresh every night because our audience is energy and vibe is so different every night. That makes it special.

JLY – They all have a special personality. Okay what do they need tonight?  Oh, okay that’s what they want.

You can feel an audience that closely?

All three – Absolutely, My God yes!

EB – You can definitely feel the audience. You can tell in the first ten minutes what kind of show it is going to be.  And my character didn’t enter until 40 minutes in so I’d be waiting in the wings and I’d ask them  “How’s it going to be” and they’d be like L or J .  It’s wild!

JLY – That’s the great thing to me about being in a film and getting to watch it later. The work is done! And when we’re promoting it, we don’t then have to go do the show for 2.5 hours!

EB – The joy of sitting here talking to you, not worrying about warming up or stretching or what I eat at 6 o’clock. I’m so loving this. We want to look good for you, so it matters what we eat!

It’s so great to see the Four Seasons perform.  That precision!

EB – We love seeing kids doing the show tunes. College kids are copying all this stuff on YouTube. Guys so often are afraid to get up there and sing and to have a masculine show that they can do with the movies.

If I had had this in high school, it would have been fabulous. I love watching them.

Crash Landing on You Finale: Ri Jeong-Hyuk (Hyun Bin) and Yoon Se-Ri...
Sign up for our Movie newsletter!