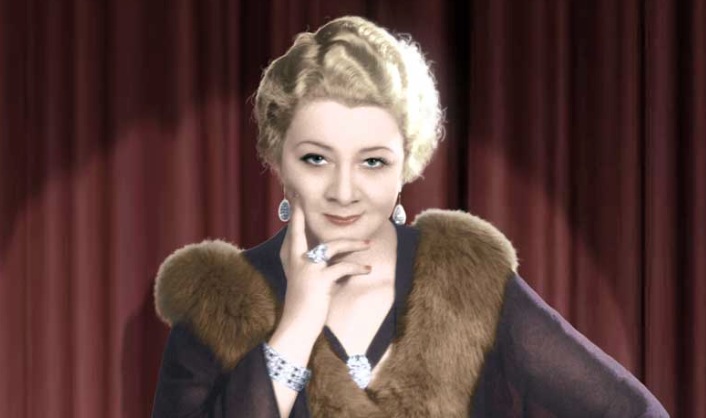 There are perhaps one percent of today’s film viewing audience that ever heard of Sophie Tucker. That is too bad, because she came from a time when stars were born not out of technical special effects, computerized sound producing and outrageous tabloid headlines but out of a work ethic and lifetime devotion to making and helping friends.

Her work ethic is reflected in the 400+ minutely detailed scrapbooks she kept of her nearly sixty years on the job, her recorded history including fond photos and remembrances of every other great star of the first half of the 20th century.

Tucker, in her own words, was not woman who went where men told her to go. They went where she told them to go. She sang the bawdiest of songs, songs only a woman with a heart as big as a whale could get away with. She made it work because everyone who knew her knew she simply would not have it any other way. If she had to, she would work them to death, even the strongest of them. Emigrating from the Ukraine with her family in 1886, by all accounts she rarely slept any more than a few hours a night. The rest of the time she was working or helping her friends work.

This documentary, lovingly narrated by co-producer Lloyd Ecker (co-produced with Susan Ecker) uses priceless photographs and diary entries within Tucker’s scrapbooks, combined with rare archival footage and even rarer audio recordings, to paint a loving picture of one of the Last of the Red Hot Mamas.

The film gives the viewer not only the inside dope on Tucker’s hilarious marriages but the dope on a lot of other people she knew as well. One person interviewed reports that one night after a party, J. Edgar Hoover asks if “after she was done with her dress, he could have it.” A known cross-dresser, the legendary FBI director was told laughingly, “You could never get into it.” Hard to say, as Sophie was, by her own description, a “perfect 48.” That is, her measurements were 48-48-48. She did not care one whit what other “fashionable” women looked like. She was tougher than any of them and she “wanted a sheik who wouldn’t get weak while she was going strong.”

She may have been known for her strong voice and naughty lyrics, but her lasting contribution was breaking trail for women performers who would do it their way. Not the way men told them to do it, but the way they wanted to do it. Her first big break came when she was hired to sing between acts of a Broadway play. She sang to standing ovations, stealing the show. Thinking she was on the top of the world, the producer called her in and fired her. She was too good. She was singing somewhere else the next day. Damn the torpedoes.

The movie takes us back to a different time in the business side of show business, as well. Meeting William Morris when he was a theatre owner and not yet head of the Morris talent agency, he said he would make her a star. They worked together for the next sixty years and never signed a contract. How did we come to make things so complicated? Are we better for it? When her accompanist, who became her arranger and a key part of her show, asked her if he was doing OK after his first few days on the job, she said, “I’ll let you know in a couple days,” and told him the same thing for the next forty six years.

During prohibition, she was the constant companion of mobsters, played cards for hours with Al Capone. But the only time she was ever arrested was for lewdness in Portland, Oregon when she performed her angle worm wiggle. The performance cannot be described, you just have to imagine. Her subsequent product endorsements showed a marketing streak far brighter than most male managers of her time.

When Josephine Baker opened in Copa City in Florida, the Ku Klux Klan threatened to burn or bomb the club if they featured the black singer. Sophie Tucker was in town, heard the news and insisted on introducing the show, say if they were going to bomb Josephine they would have to blow her up, too. Another lifelong friend made.

A biopic without a grain of self-serving exploitation, you will love every minute of this walk through show biz history.