A disturbing love story set in the unforgiving world of the Internet. 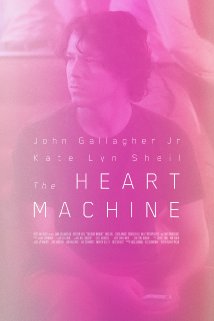 Writer/director Zachary Wigon’s essay on the vicissitudes of internet love starts innocently enough. A quiet, intimate conversation in the privacy of Cody’s (John Gallagher Jr. – HBO’s “The Newsroom,” and “Short Term 12”) East Village apartment with a possible significant other. The woman is Virginia (Kate Lyn Sheil – Netflix “House of Cards,” “Your Next”), and her end of the intimate, semi-clothed chat is coming from Berlin. The two appear to be quite compatible and a meeting is in the offing.

Then a confusing camera cut throws us off and we are looking at the same woman having a decidedly lewd discussion with her friend in New York City. The woman looks a lot like Virginia, but she does not talk like Virginia. If you see this film, pay close attention, one slip and you will be out of the loop for the rest of the film. Virginia’s innocent twin is just around the corner.

The fact is, Wigon cuts this kind of thing too close for comfort in this abstract and almost sci-fi social commentary on the alienation of the Internet age. There are questions blowing in the wind about just how much humanity we are giving away to technology and how much technology we are taking on to replace it. There are times when the helpful word suggestions on the smart phone e-mail app sometimes become too good to resist. They may not be exactly right, but they are good enough. The four thousand mile relationship is hard to fathom, but it appears to be pretty good, from a distance.

A fleeting glance of Virginia brings alive the conspirator in Cody. He thinks something is fishy and he starts on a private detective chase through the hinterlands of lower Manhattan that verges on the ridiculous. Soon he is practicing for extreme and more extensive mistruths to locate the vaporous woman of his dreams than he suspects of the woman herself. The rapidly changing scenes are juxtaposed with Cody’s rapidly changing fears about himself and the world around him. The sudden crashing noises and flashing of the subway lights belie the gentle calm of the woman before him on the a screen.

Virginia is an office manager in a writer’s office. This is her vocation but not her location. Craig’s list comes into play, more separation and alienation, incomplete intimacy and nonexistent transparency. Cody begins to have false love affairs to find out the truth behind his real love affair. At some point the illusion of love replaces the real thing. It will not be until the end of the story that we find out if there is enough of the real thing left for love to survive.

Smart phones come and go throughout the film, but they are always symbols and organs of deception. Cinematographer Rob Leitzell (“Beasts of the Southern Wild” lead engineer for aurochs and special effects”) makes sure the tone of the film is decidedly anti-technology, with many of the most crucial and emotional scenes taking place in the darkness of the city that personifies film noir. The computer screen blasts out from the night like the harsh, unshielded light bulb hanging from the interrogation room in a thousand pulp fiction detective flicks. As Cody slinks and pries, the POV camera footage sweats it out of you in the dark.

Desperation turns to obsession but there is no change on the computer screen. The film’s angles, tones and contrasts stay the same while Cody’s world dissolves and fractures into discorporate scenes of timeless frustration.

In the end, the players have their reasons for wanting distance in their relationship, although neither wants to admit it. The internet provides this distance, but at a cost. This stripped down condemnation of online romance shows that there are no crutches without weak points. The stronger the support, the harder the fall. After seeing this film, you may decide those trips to the bar or coffee house were the best way, after all.

Paul Staehle says Pierre is definitely his kid because he ‘has my...