A great cast gives it their all but are sampled one time too many by Ari Folman’s sci-fi monster. 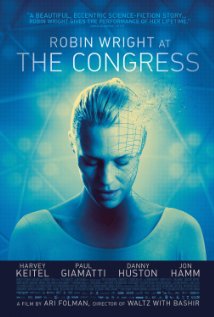 Screened at the 40th Seattle International Film Festival, Ari Folman’s follow-up to his Oscar nominated “Waltz with Bashir” is an engaging live action-animation hybrid that runs a hard race but fails to make the big score. At 122 minutes, this thoroughly produced flick is a good 20 minutes too long. But which 20 minutes to take out? Anarchists will love the film as an unvarnished attack on the film industry status quo. “Film studios are no damn good.” Yes!

Well, except that they make films like this, at least once in a while. Robin Wright and Harvey Keitel share lead duties as an aging film star and Al, her no-nonsense, pragmatic agent. Both are perfectly cast for their roles; perhaps too perfectly cast, as they seem to move through the film at about half speed. The screenplay is sci-fi throughout, and both Keitel and Wright have problems delivering long stretches of marginal psycho-babble and maintaining their established screen personas. Keitel is too dangerous to be high-tech and Wright is too sincere to be sci-fi.

At issue is the making of human computer models. In the case of Robin, the aging actress will be “sampled” in the same way as the sound musical instruments. Through the miracle of ever more powerful computers, the complexities of the human form are broken down into “exabits,” stored and used repeatedly in the future to make films. The performer lives forever. Or is it like they never lived at all? Producer Jeff (Danny Huston) offers sampling to Robin and Al as “the last contract offer she will ever have.” That sounds scary enough, but not nearly as scary as having one’s soul digitized and sold like chopped liver on the open market.

Perhaps, that always happens when a person enters show business. Or any business. But not to Robin, which explains why she lives in a trailer on the edge of an airport. High maintenance, this actress is not. The kernel of the film is to be true to oneself and not sell out, no matter what the price or the consequences. If you resist temptation, you will be able to fly around in those marvelous zeppelins.

Jeff is played perfectly by Huston, who is better able than the other two leads to summon up his tough guy past to match his character of the (hilariously) heartless producer at Miramount Studios. This film requires more than a little suspension of disbelief, and if there is a good dose of anti-establishment angst in the viewer that is also a big help. As the film shifts into animation mode at about the halfway point, Robin drives her Porsche to the Futurist Congress. Sniffing the magic vial she gives up reality to enter into the make-believe world of data recombination where anybody can be who, or what, they want to be.

It is during this frantic, spectacular and tedious run-around that she teams up with animator Dylan Truliner (voiced by Jon Hamm). Dylan becomes her companion in evading the bad guys, returning to the good guys and finding the Yellow Brick Road. Wait a minute, that’s a different film. Robin finds Dr. Barker (Paul Giamatti) who starts out diagnosing her son Aron’s mysterious hearing and sight loss and ends up explaining the difference between reinventing truth and disguising it. If you are still awake by this time you may leave the theatre with this gem of Hollywood truth firmly lodged between your ears.

Even with the low-tech animation this movie keeps us guessing about what will happen next and that is a good thing. The ongoing dialogue about how rich, successful actors have been taken advantage of by studios does not hold the magnetism of truth that it takes to get us all firmly behind the cause. During the animated last half of the film, Tom Cruise shows up as a perfectly caricatured Evan Ferrante. Producer Jeff refers to him as “what’s his name.” We think there is a joke there but we are not sure what it is.

About three quarters of the way through the movie, Miramount Studios morphs into Miramount-Nagasaki Labs which has developed a drinkable compound (makes a great milk shake) that allows us to forget everything bad and live a life of blissful ignorance. Like green tea, or whiskey. Dozing off is a bad idea at this point because things happen fast and it is important to appreciate that these labs are concerned with selling films, or something, and not with curing the diseases of the children of the world. Or did you already know that?

All in all, a tough bargain for no better reason than to just stay young. But the helicopters, zeppelins and belching machine rooms made it worth it, at least for this participant.