Spirits in restrooms, blood from the walls and a hand cranked camera add up to something, but we are not sure what. 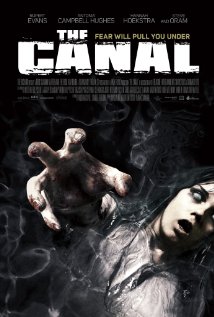 Film archivist David (Rupert Evans) smells a rat. Maybe it is that his wife Alice (Hannah Hoekstra) seems distracted by her business associate Alex (Carl Shaaban) and seems to be pulling away from David. That could be because she is having an affair with Alex. Then, again, it could be because David is having these recurring dreams of rivers of blood coming out of the walls. Or, it could be that she saw “The Shining” and is afraid her hubby is turning into Jack Nicholson.

In fact, we wish David would turn into Jack, because it takes that kind of raw, unbridled energy to pull together what is otherwise a fairly cheesy, slapped together pastiche of horror show tropes. The actors give it their all and the production values are fine, but the screenplay just is not there. Try as they might, this film is slow and tedious and there is little to look forward to given the little we know, or care, about the characters.

The trouble starts when David’s work partner Claire (Antonia Campbell-Hughes) gives him a reel of old footage (to be archived) that seems to show his house was the setting of a suitably gory murder in 1902. That would explain the blood coming from the walls like a freeze damaged catsup main, but why does his son look so calm and innocent? It may be because his son does not feel the impact of these opening scenes any more than we in the audience do. That is a big mistake on the kid’s part, because if he took a little notice of the David Lynch plastic hanging around and if knew anything about “Twin Peaks” he would know there is mayhem afoot.

Almost the entire story is told, or semi-told, through flashbacks. Flashbacks are a good way to tell a scary story because they allow the story teller to drop clues as to the bloody travesty a little at a time, and to tell them as thoroughly as desired. Jump-scares are a different story. They are obnoxious, especially when paired with eardrum rupturing blasts of meaningless noise. They are not film making, but an admission that will be no film making and the audience had better pay attention because if nothing comes of the flick, it is their fault.

However, flashbacks have to be used carefully, because they back the story hard to follow. In this case, we are not inspired to put the pieces painfully into place and piece together a story that seemed sub-normal from the beginning. Alice disappears and there are flashbacks to the “canal” and various instruments of destruction.

A hammer is picked up in a moment of rage, but not used. But it is found later and David is accused of using it. There is a dream sequence where David commits a crime, but, thankfully, it was only a dream. More flashing David Lynch lights flicker and spark, there is a revelation of sexual violence perpetrated against the former nanny in the house. Very mysterious and, unfortunately, all too much work for some of us. Get on with the show and stop with the red herrings.

A hand cranked camera is brought into action that shows the creeping devil spirit as he stalks Dave with unfathomed evil. Sometimes the camera works and sometimes it does not. David sees the spirits but others do not get the picture. The investigator is called in and he is sure David did away with Alice. But, of course, he does not know what we know, which is that there are demons in those outhouse walls that have fingered David for the Big Sleep in Hell. How many red herrings does it take to make a bad movie? Is David being punked here, or are we?

This appears to be director/writer Ivan Kavanagh’s fifth feature length film, so, perhaps, he is still playing it safe. This movie will make its money back, and then some, because it is reliably kinky and most in the audience will be checking their phones for messages now and then anyway, so they will forgive the fact that they cannot make any sense of the story. Let us hope this is just a practice game for the film maker and that there are some really good films coming from his way in the near future.