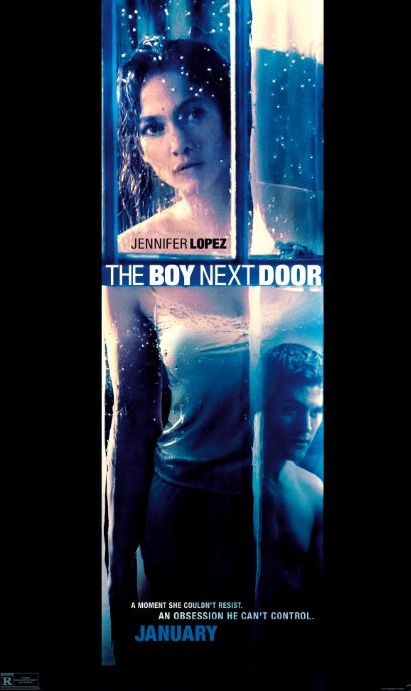 Although director Rob Cohen’s film is classified as a thriller, it is anything but. The first sixty minutes of the ninety-one minute movie is a straight up TV soap opera with nothing but the most hackneyed, overused plot tricks. The last thirty minutes might have made a part of a B horror film if the audience had been kept awake by a different opening. Unfortunately, many of those in attendance either came expecting more, or were checking their cell phone messages by the time of the climax.

Jennifer Lopez plays high school classics teacher Claire Peterson. Her husband is an incurable philanderer and she has separated from him on the stern advice of her friend (Kristin Chenoweth) who is also the vice principal at her school. The film opens with the sudden appearance of intensely handsome nineteen year old Ryan Guzman (Noah Sandborn) who is visiting his uncle (a hilariously grotesque Jack Wallace) who lives next door. Noah is the “boy next door.”

An extremely torrid and equally brief sexual encounter between Claire and Noah takes place and Noah uses this to stalk Claire during the first two-thirds of the film. This is the part that is inexcusably tedious, trite, ill-conceived and ill-acted. During the build-up to the final blood spattered thirty minutes, Claire passes every possible opportunity to obey the dictates of common sense and stop Noah as he drops into insanity.

There is no particular tension during this part of the screenplay. We know Noah is going to get it in the end; the only question is who will do the deed and how will it happen.

Claire’s son and her estranged husband pop in and out of the story as Noah becomes increasingly unhinged. True to the overall low quality of the script, every blow, mental and physical, that Claire delivers to Noah is followed by her turning her back on him and allowing him to recover and continue the mayhem. There is no plausible reason for her to behave in this way. Against all common sense, her embarrassing but excusable indiscretion is allowed to mushroom into bloody violence.

It is hard to see how this film will appeal to any age group except the 15 to 25 YO category, but with the “R” rating it will be restricted to the older segment of this group. High points of the screenplay include the father and son in the car, racing down the hill, much too fast, when, yes, the brakes fail and disaster is narrowly averted. Sneaking around in Noah’s creepy basement (where else?) Claire discovers downloaded maintenance diagrams of the car’s brake system. She deletes them, apparently to avoid further bloodshed. Members of the audience are checking their I-Phones to gain some understanding of why they ever showed up for this movie.

In the end there is a gasoline drenched fire in a carriage house in which none of the gasoline-soaked family is hurt but the rest of the structure erupts explosively into immediate, ferocious flames. Did these film makers take high school science? This is preceded by a gratuitous throat slitting. As the body falls on Claire, there is even a screeching cat running out of the house. Trick or Treat.

Blessedly, the matter is finished quickly in classic, cheap, horror movie style. By the ending sequence, viewers start to wonder if the flick was intentionally made in a knuckleheaded fashion as some kind of subtle inside joke. But the whole setup is too normal, dreary and just plain routine to allow a glimmer of such a saving virtue. This appears to be a completely serious attempt at a “thriller.”