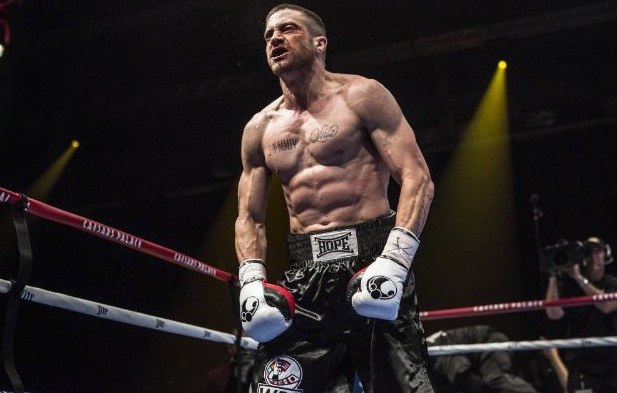 An almost fatally derivative fight flick is saved by a key performance and some good old on-screen fight hokum.

This boxing tale splashes the latest hi-tech boxing sequences in front of the audience in no holds barred graphic violence but the film is saved by one key performance. Twelve year old Oona Lawrence punches through the ordinary passive child role to put out some work that is as riveting, or more, than Jake Gyllenhaal in the ring. Lawrence, best known for originating the role of Matilda Wormwood in “Matilda” on Broadway is way ahead of her time. You will come away from this flick wondering how they made up a twenty-five year actress to look twelve.

Jake Gyllenhaal gets the bulk of the screen time with boxing stud Billy Hope who came up from the orphanages of the tough side of New York to “be a contenda.” His wife Maureen (Rachel McAdams) came up through the orphanages with him, or something equally grim, and wants him to quit the ring while he is champion and still has most of his brain left. Between the three of them, Maureen does the thinking and Billy does the boxing and Leila (Lawrence) does the usual kid thing. 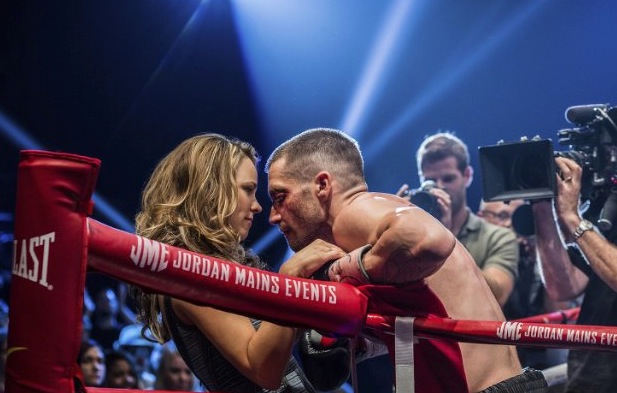 When tragedy strikes, Billy loses his money, house and even Leila. Dropping far and fast he has to scratch and claw at every ounce of inner strength he has to reunite his family. Helping him out is battle-scarred trainer Tick Wills (Forest Whitaker) who spends more time at the bar than in the gym. Retired from pro-boxing, Wills devotes his life to the kids from the surrounding ‘hoods who come to his gym. He does not make them into fighters; he makes them into men with the self-respect they need to survive in a world that would just as soon see them dead.

Are you going to see Southpaw?

Nah, I’ll catch it on TV

By the time Billy and Wills meet, they are both at the ends of their respective lines. Wills has found it impossible to prevent all of his kids from dropping into the inner city abyss that is America’s ghettos, and Billy has lost control of his mind.

Something has to give. By helping each other, and with help from Leila, they are able to get their lives together for one last shot at the championship of the world.

Forest Whittaker puts out another great performance, but his parts of Kurt Sutter’s screenplay are so much like the lines of the same characters that preceded him that he does not have the room to move. No matter, as this is only Sutter’s first credited feature film screenplay, we should have lots of opportunities to see more from him in the future.

Director Antoine Fuqua did not win an Oscar for directing the quintessential buddy cop drama “Training Day” (like Best Actor Denzel Washington), but this film shows he is solidly in that class. Lucky for us he ignored the age-old show-biz caution to never direct a film with either children or animals.

What do you think of the movie? Let us know in the comments below.