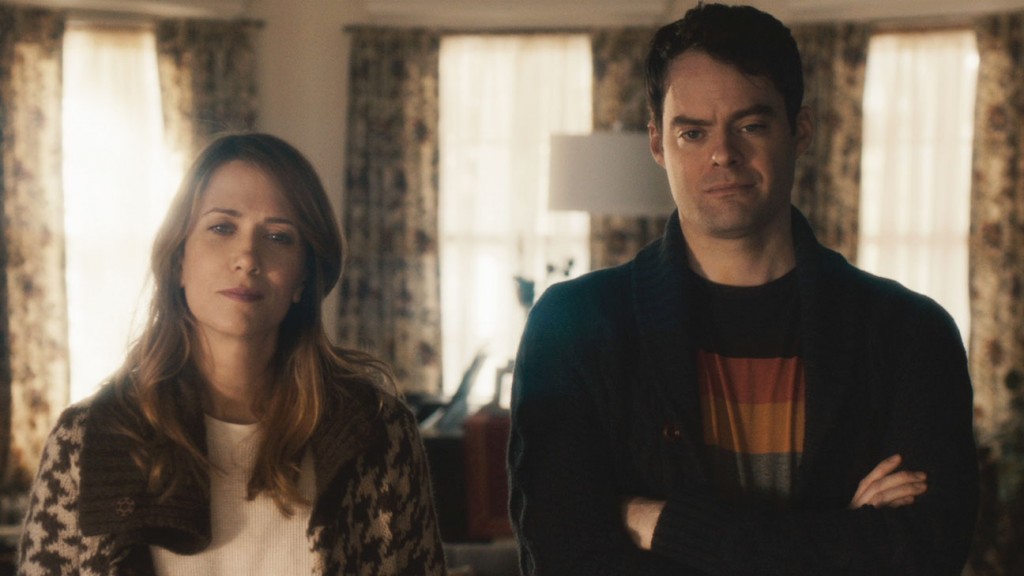 No history-making drama here, but a sincere journey into solidly founded fears that dog the parents of the new millennium

Screened at the 40th Seattle International Film Festival, Craig Johnson directs “Saturday Night Live” alums Kristen Wiig and Bill Hader as estranged twins reuniting after ten years of silence. The film starts off with the twins simultaneously planning suicide. Brother Milo (Bill Hader) gets furthest down the road, drinking a lot of strong alcoholic beverages, turning up the stereo to drown out of the voices in his head and cutting his wrist, ineffectually. He ends up in the care of hospital staff who notify his sister Maggie (Kristen Wiig), and a film is born.

After an intimate early childhood, the two have gone through some apparently cataclysmic life event that broke them up, big time. They are now in their twenties and pursuing adult lives, which, we will soon see, are lies. Milo is gay and out of the closet but his past holds dark secrets involving decade-older secret lover Rich Levitt (Ty Burrell). Maggie is married to regular guy Lance (Luke Wilson) but she has a very dark side of her own. Rich had a secret that came out and resulted in the destruction of his career and Lance has no secrets at all. Milo and Maggie are polar opposites of Rich and Lance. In this film the skeleton twins (so-called in remembrance of childhood dolls—this is no horror flick) have a monopoly on the dark underbelly of self-deceit. Thank goodness for them, or we would have no film at all.

At the root of this guilt-drenched depression is their mother Judy (Joanna Gleason) who we get to see only briefly about halfway through the film. This is too bad because Gleason is more fun to watch than Hader and Wiig put together. OK, that’s not fair. She is more fun to watch because she has the better role. She gets to be the bad mom that messed up her kids. In fact, she was such a miserable shrew she made her husband jump off a bridge. When Maggie and Lance were married, she missed the wedding because it conflicted with a yoga retreat. She lives in Sedona, the assumed heartland of the self-absorbed rich. Now that is a role worth having.

Wait a minute, is there a pattern here? Too many suicides spoil the screenplay, unless the theme of the film is that parent suicides lead to child suicides, which is a thin theme. Perhaps the film is more about good choices and bad choices. Although there is a lot more time spent on the bad choices than the good ones, we get the idea. The bad choices make a more exciting movie, anyway. Maggie has some very hot sex with her scuba instructor, who has a very sexy accent, and relates details of her steamy, unfaithful past and an amazingly deep track record of deception against her none-too-observant hubbie Lance.

Is Milo’s gay sexual orientation in any way connected with his father’s apparent destruction at the hands of his cruel and self-absorbed mother? Is Maggie’s chronic deception a result of her fear of becoming like her mother? The film explores the fear that women have (men have it, too) of bearing children into a tough, new world.

At some point there is the possibility that fear of becoming like one’s parent is a sign one is already donning the mantle of their weaknesses. Self-awareness and sensitivity are talents that demand careful stewardship growing up in the modern world. If we don’t know that going into this film, we get the picture by the closing credits.

The problem with a poor self-image is that the victim is more interested in proving how bad they can fail than they are in using their talents to help themselves, and others at the same time. So there is a tough love aspect to demanding respect for oneself. The only way we get that is by identifying with people and, at all costs, not abandoning those who are in the best position to help us.

At the bottom of it all, we are all twins to some degree.

In spite of excellent performances by all of the leading players, this screenplay by director Craig Johnson (co-written with Mark Heyman, one-third of the “Black Swan” screenwriting team) sporadically devolves into silly skits that water down the intensity of the performances. These skits are flashbacks into the childhood memories and behaviors of the two leads and are presented as necessary therapy on the road to emotional healing. It would be great if it were that simple, but perhaps finding the inner child has its place, along with yoga retreats and getting the good vibrations Sedona. As this is only Johnson’s second work in feature direction, he has years of potential improvement ahead of him. This is not a bad first try but here simply is not enough edginess, or humor, to propel the movie one way or the other. Luke Wilson barely gets a chance to show any chops at all, although he may be the most talented performer in the cast.