Scott Speedman grew up around Ontario’s Muskoka Lakes and Georgian Bay, a vacation getaway landscape that is part of the Canadian Shield. It holds a special place in his heart.

So shooting October Gale on Lake Joseph was something special. Speedman returned home to star in October Gale, a romantic thriller about a man who breaks into a woman’s cottage at night, putting both their lives at risk.

Stormy conditions outside mirror rising tensions inside as a night of depravity and violence begins. Oh, and there’s a little unexpected romance. We spoke with Speedman from New York. 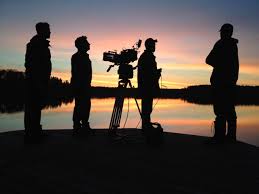 What was it like working in the confined space of an island cottage for this tense, violent drama?

Maybe I’m a weirdo I enjoy for the most part some of the insane challenges this job offers high stress, movies like this – symphonic add to the feel of the movie.

I’ve been doing this for a while every film has its own stresses. But I know what you mean, films like Death and the Maiden and Deathtrap, those great films. 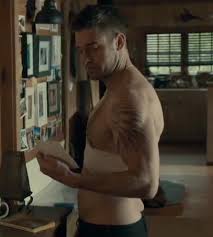 Given the weather and the story was it physically challenging?

I’d really I love to tell you that it was dramatic and tough but it really wasn’t. Others might say it was, maybe I’m a glutton for punishment.

It gets cold at 3 am and I think to myself “I’m a college dropout and I’m getting paid to run around in the mud!” It’s a good time. I’ve been on worse and actually, close to impossible sets.

Here it was close to freezing and lake wouldn’t melt, that was tough for the director and producer but for me it meant not shooting for a few days.

We shot the film on Lake Joseph. It’s always good to be back there. It might have been uncomfortable but it’s so beautiful and it’s so nice to be back and have the Canadian experience nostalgia.

Well, you are Canadian, built for the conditions.

Yes I am! It was late March, April and early May, so I was okay.

Your character William could be a good person or dangerous – we just don’t know. You don’t change your performance, but we begin to “see” him.

I think like in any situation the audience becomes acclimated to the situation. He’s a trapped animal at the beginning and we’re scared of him because he is trying to survive and he’ll do anything to survive, up against the wall, claws out.

But as he gets to know Helen he starts trusting her and the audience relaxes. 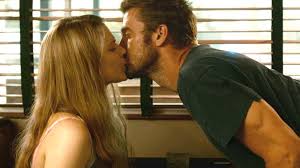 The romance between your character and Patricia Clarkson’s is a pretty bold May-December statement.

I like romance. But regarding the age gap, it wouldn’t cross my mind that two people in an intense situation where lives are at stake would not come together.

Patricia is a beautiful woman. It didn’t even occur to me to think much about it. I don’t think it makes sense not to. It’s true, there are many ways romance works.

Exactly. She is really fierce as an actress and as a human being. It’s so easy to do the storyline with her.

Watching movies like October Gale at the cottage is fun because they’re so scary and you’re isolated and in the woods. What films scare you?

I’ve done a couple movies like this, away and remote. This film would have scared me as a kid. One film that really got to me was The Shining because it’s so well done. I was watching it at a friend’s cottage in Muskoka and I turned it off. I’m a wuss!

Do you get home much?

Oh, yes, at least twice a year and when I do films in Toronto hopefully. My mom lives in on Georgian Bay. I love it up there, playing sports and being really active. We spend Christmases there. I love it.

What on the agenda now?

I’m working on something good to do that challenges me, television or a good movie. I’m a little more selective these days. It’s the right time to not say yes to a project that doesn’t challenge me. So I’m sitting on it for now.