Meryl Streep did not miss her calling as a rock star, but the chemistry with her daughter Mamie Gummer makes this flick a winner. 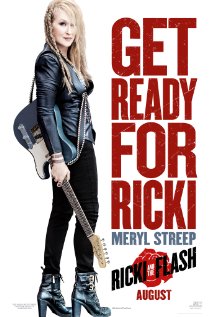 Now for something completely different. Oscar winning director Jonathan Demme (“The Silence of the Lambs”) teams up with Oscar winning screenwriter Diablo Cody (“Juno”) in a film featuring Oscar winning super star Meryl Streep as the aging rock band front woman for Ricki and the Jets. As it turns out, the rest of the Jets are also anything but ordinary. The band co-leader is Rick Springfield, playing her boyfriend Greg and the other members are legendary rock sidemen who have played with the best. A slickly produced rockapalooza is born.

With rock-doc master Demme at the helm, this film features flat out great music. Although it is not as good as his past work, such as the Talking Heads’ “Stop Making Sense,” the film features a soundtrack that literally drips tireless rehearsal and expert studio doctoring. How much of what we hear is actually straight from the band is hard to say, but it appears most of it really is the group playing on screen.

Meryl Streep’s produces her usual superb performance in spite of the fact that there is zero chemistry with Springfield. As long as he is playing the guitar, everything is fine. But when the two make whoopee it is entirely too much information. Their romance is critical because this is mostly a romantic comedy, but the two rarely get too lovey-dovey on the screen. 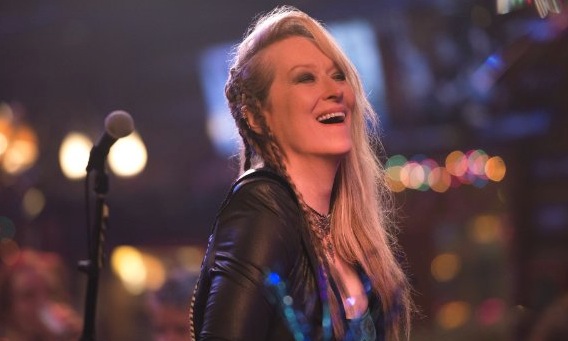 Mamie Gummer gets second most screen time as Ricki’s distraught daughter Julie. The fact that Gummer is Streep’s real life daughter apparently did not hurt anything, as they are able to go at each other hammer and tongs as only a mom and daughter can. This could be Gummer’s break out performance. She explodes on screen like gasoline and matches.

Kevin Kline is hilarious as Ricki’s ex-husband Pete, doing some of his best work since his Oscar winning performance in “A Fish Called Wanda.” Kline is reuniting with Streep after their smash hit “Sophie’s Choice.”

Mostly a musical rom-com, there are elements of redemption and forgiveness in the story as the runaway rock star mom comes to grips with her neglect of her children and Pete. Unfortunately, that is the least interesting part of the movie. The rocking sound track and clever on-screen personalities of the show biz people and their road-house fans steal the show. The more meaningful fence-mending drops into the background. The chickens come home to roost and everybody is one big happy family again. Upon exiting the theatre the viewer wonders if they have just seen a film or a celebrity band recital.

No matter, it is all good fun. Although much of the film is forgettable, Mamie Gummer’s performance is not. Let us hope she can keep up this intensity in her upcoming films where she is on her own, without mom in the wings. Special mentions to Aaron Clifton Moten as Troy, the Total Foods store supervisor with the biggest smile in the Western Hemisphere and Charlotte Rae as Pete’s aged mother Oma.