In this gluttonous era of superhero movies, one of the valid criticisms is the lack of consequence or stakes as heroes and villains pound each other to a pulp. These super beings can do little harm to each other and outside of a band of henchmen (or nameless hordes of aliens or robots), the casualties are minimal, well, except for the civilians. This is one of the biggest complaints of Man of Steel, yet I found that to be largely unwarranted, considering how many times Henry Cavil’s Kal-El actually does save the entire human race in that film.

But while fans of the Marvel Cinematic Universe and DC’s Extended Universe exchange online jabs at each other, the lack of criticism for the same disregard for life in the Marvel films is unfair. For example, in the climax of the first Avengers film, giant alien ships crashed into skyscrapers which fell on top of one another. In Captain America: Winter Soldier, a gigantic Helicarrier crashed into waters of Washington D.C., and in Avengers: Age of Ultron an entire city was lifted off high into the sky before crashing down. To say that there were no casualties in these films, but too many in Man of Steel, is as silly as the hypocritical finger pointing and verbal sparring between our political parties.

Still, this argument of collateral damage is cleverly at the center of the latest MCU film, Captain America: Civil War, a story that originated out of an event comic by Mark Millar and Steve McNiven, where innocent casualties were the result of careless metahuman activity. Too much unlicensed vigilantism for the greater good creates a rift between those who have powers and those who do not. In a call for registration, there are those among the Avengers who don’t want to be at the mercy and disposal of the United Nations. When it’s evident that another act of terrorism has been carried out by Steve Rogers/Captain America’s (Chris Evans) friend Bucky (Sebastian Stan), who was brainwashed and turned into a Russian super-assassin, known as the Winter Soldier, Cap rushes to help his friend.

Riddled by guilt and the shrapnel of his work, Tony Stark/Iron Man (Robert Downey Jr.) feels it is part of their duty in protecting lives to register and turn over their responsibility to act to the UN. Rogers disagrees, and thinks that they work best when they are free to make the calls themselves, despite the unfortunate ones caught in the crossfire. It’s philosophical and political as it comes in super hero stories, though not nearly as much gravitas as the X-Men’s Professor X and Magneto conflict, which was inspired by the real life early differences between Dr. Martin Luther King and Malcolm X. The conflict between Captain America and Iron Man does carry some heft as it concerns this universe and the sudden explosion of super-powered beings on Earth. There’s a cause and effect at play and it’s illustrated on the moral dilemma that Stark and Rogers are individually wrestling with. 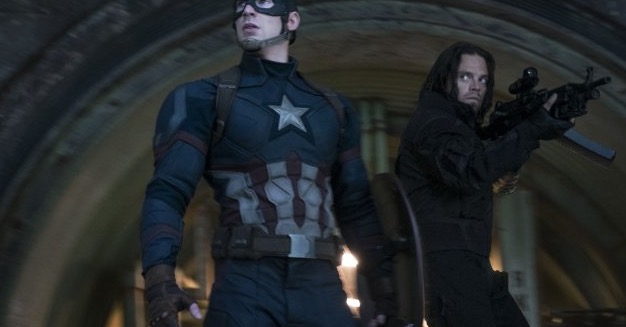 The buildup of the conflict isn’t some sudden collision out of nowhere, this story is encompasses what’s gone on in the dozen other films prior, carefully converging before laying the roots for the next wave of films. At the point at which either side cannot reverse their tracks, it successfully recreates that joy of reading contemporary superhero comics and nerdy clashes of who would beat who in a legendary duel.

This is not the place to discuss how the film is resolved, but it’s important to notice Marvel Studio’s upcoming three-year schedule after seeing what takes place in this story. The fallout casts a series of shadows moving forward and perhaps that is echoed in the beautiful Sarofsky-designed end credits, done completely with light and shadows. And please be sure to stay for both end-credit scenes.

Civil War isn’t the only comic that’s been brought to life in this film. Longtime Marvel readers will also see the influence of beloved stories like Scarlet Witch and Vision, Captain America and the Falcon, Ed Brubaker’s Winter Soldier, Christopher Priest’s run on Black Panther and for the first time in this unified MCU, the introduction of Spider-Man. Screenwriters Christopher Markus and Stephen McFeely have whipped up a masterful script to service so many stories and characters without compromising a single one of them.

All of the aforementioned characters got a satisfying cinematic treatment this time around. There were no weak links; no one was treated like an afterthought–and that’s difficult to do juggling this many characters. So once again, high marks are deserved for brothers Anthony and Joe Russo, who last floored audiences with Captain America: The Winter Soldier, arguably the best Marvel film to date. Some filmgoers will walk away from Civil War ready to debate that title.

The Russos have an uncanny way of creating this tapestry of ideas and high-concept elements without making the story feel overstuffed. Everything dovetails nicely into each other, even Peter Parker’s dealings with Tony Stark. Within those layers too, the “evil” comes out in multiple levels, so while Hydra (in The Winter Soldier) and in this case Helmut Zemo (Daniel Bruhl) don’t occupy the same screen time that other mustache-twirling super-villains often do, their threatening ways resonate much better than 95% of Marvel’s attempts at creating adversaries.

It’s just one of the dozens of things that the Russos do well and while I feel Civil War falls short of being the best Marvel film (sorry, that still belongs to the Winter Soldier), it is in rare company among the cream of the crop that includes the first films of both Iron Man and Avengers, Guardians of the Galaxy and even the recent Netflix series of Daredevil.

One could say that Captain America himself was short-changed, but anyone who is vested in these Marvel films knows well enough by now that outside of origin films there are no more central figures. The MCU films are one, long-running story building on top of itself. Civil War is less a pure sequel to the Winter Soldier, but rather continuing the fallout of Avengers: Age of Ultron, Ant-Man, and others while launching the upcoming Black Panther and Spider-Man: Homecoming films.

So for those already bought in, I doubt much of what I’ve said will matter; it’s as good as you’re hoping it will be. And for those who have been cherry picking along the way or are fearing the so-called “superhero fatigue” Captain America: Civil War will either restore or fortify your enthusiasm for the genre.

Jinger Duggar joins Cameo: Are the Vuolos strapped for cash?
Sign up for our Movie newsletter!