Every generation has their movies that captivate them with fantastic worlds, and Steven Spielberg has been a part of most of them. Children of the ‘70s were enthralled with Star Wars by his friend George Lucas. Then Spielberg got the ‘80s and ‘90s with E.T. and Jurassic Park.

Ready Player One could be the world that children of the new millennium obsess over, or maybe it lets those ‘80s kids have another movie experience like when they were kids. Either way, Spielberg remains a master at this kind of entertainment.

There’s a lot to explain about the world of Ready Player One and Spielberg handles it deftly on screen. Wade Watts (Tye Sheridan) ambles (see what I did there?) through The Stacks, a 2045 trailer park with trailers literally stacked on top of each other.

As he passes by windows, we see how various different users experience the OASIS, a virtual world they access through VR visors, gloves and in some cases omnidirectional treadmills and full body suits.

By now audiences understand what a virtual reality is. The Spielberg touch is that we literally enter the OASIS through Wade’s eyes. That’s how Spielberg always captures the childlike wonder of a world no matter what the new technology is.

But wait, there’s more. James Halliday (Mark Rylance) created the OASIS. When he died he left behind a game where the winner who found his three keys could inherit the OASIS from him.

With corrupt IOI exec Nolan Sorrento (Ben Mendelsohn) after the keys, Wade and his friends have to win the game to save the OASIS from a greedy corporation.

Spielberg and the script by Zak Penn and author Ernest Cline get through all that exposition with a sense of humor. Showing how real world people react to happenings of their OASIS characters is brilliant.

The hook is that in the OASIS, characters can model themselves after any avatar and buy skins and gadgets of popular pop culture characters. The OASIS is not a simulation of the real world, but rather a compendium of every favorite movie, game, comic book or anything that ever existed. It’s The Matrix meets everything!

There can be a sense that too many inside jokes leaves a lot of the audience out. If you’re going to references stuff, then load the movie with so many that you can’t even catch them all the first time. You’ll want to pause the crowd shots on the Blu-ray so you can point out all the characters in the background.

The sign on a movie marquee in the first race made me so happy. It’s a reference to a fake movie within another movie from 1993 that was not a box office hit (though it has a Zak Penn connection) so you’d really have to know your stuff to get it. There are international references too, not just American pop culture.

Art3mis (Olivia Cooke) pranks Parzival with a hybrid of references that shows the players using the references creatively, not just as they originally appeared in their source material. 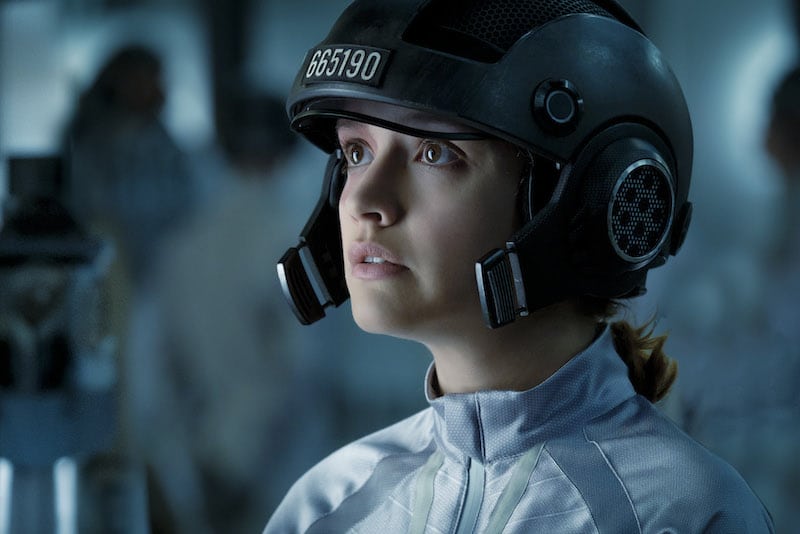 In the OASIS you are watching a lot of video game animation, but again Spielberg applies his cinematic touch to it. Spielberg knows how to reveal things, so cinematographer Janusz Kaminski spins around as Wade’s avatar Parzival manifests the De Lorean from Back to the Future for a race.

It’s refreshing to see visual effects embrace that it’s not supposed to look real. They can use the video gameness to load the scene with unrealistic elements, like instant transformations, because that’s what people would do if not bound by the laws of physics.

It can be very busy, but you can track all the main character and the obstacles in their path. The cinematography is ambitious spinning around not only 360, but 720 degrees around the scenes.

They’ve also made Ready Player One more cinematic. The challenges are not Joust and Pac-Man anymore. They are blockbuster movie set pieces that use the medium’s strengths.

Occasionally Spielberg cuts to the players in the real world hooked up to their VR equipment, but it is intuitive and doesn’t disrupt the flow. In the final battle, it’s pretty empowering to see the entire city of Columbus, OH join in on the streets wearing their visors.

This is Spielberg’s specialty. It’s kids having an adventure together, and the adults just don’t get it. The IOI flunkies can get killed indiscriminately like the Nazis in Raiders of the Lost Ark, and only their avatars die anyway.

Even though they have unlimited abilities in the OASIS, they have the same problems as ever in the real world. In a broken family, the deadbeat patriarch blows all their money with fruitless schemes.

I do wonder what the experience of watching Ready Player One would be for someone who’s never played Atari 2600, seen The Shining or Back to the Future or other central references, etc. It’s okay to make movies for niche audiences, but it’s rare for a tentpole blockbuster to eliminate any of the four quadrants.

I trust it would be like when I saw Airplane when I was eight and didn’t know anything about disaster movies. Still, I can’t imagine the third act would mean anything to people who’ve never played Atari 2600, no matter how much they explain the history of Adventure.

Some of the things that bothered me in the book remain in the movie. I was really hoping they’d just eliminate Art3mis’s insecurity about meeting in real life entirely from the adaptation.

It’s hardly a spoiler that they’re gonna meet anyway, but the circumstances of her insecurity only serves to let Wade validate her with his approval. They could have lopped out less than a minute of dialogue and avoided this toxic subplot. 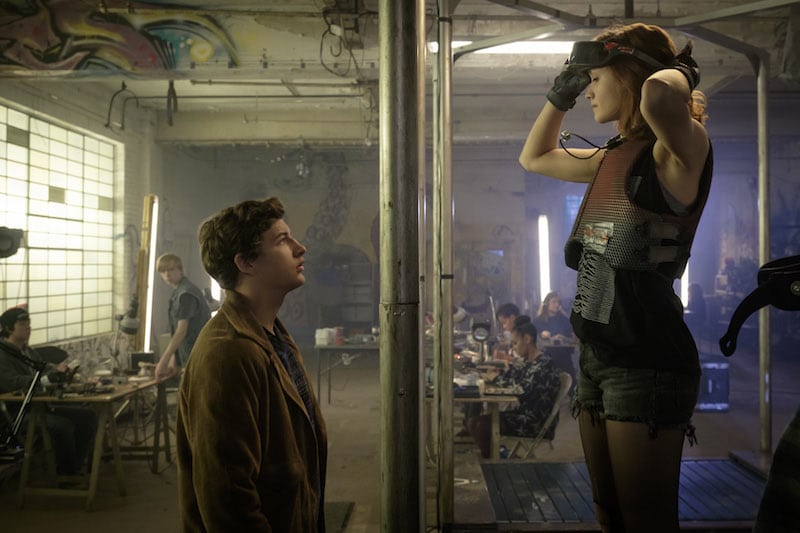 There’s still a sense that it’s the noble keeper of true fandom versus the corporate shill selling out art. There’s a scene that’s supposed to play as Wade representing pure love of pop culture vs. Nolan paying a team to fill in the blanks for him, but really neither of them are very noble in that scenario.

Ultimately, the film’s message is “have fun with your toys but don’t forget to live real life.”  Perhaps as long as Wade learns that, he can be forgiven for fanboying out. Just don’t forget these things you love were also created by companies for money. Keep it all in perspective.

Also, was there no pop culture from 2020 to 2045? Like you’d think some of the kids who grew up in the 2030s would have new stuff they liked. Even in a 2025 flashback, they were going to see old movies. Maybe there is a huge revival of reparatory cinema seven years from now.

Ready Player One may be the peak of nostalgia culture. Maybe another talented storyteller will come up with yet another level to it, but if this is the the end, then what a way to go. Whenever this wave of nostalgia culture ends, I will look back on it fondly.