Put the time-travel gibberish into the background and the result is a great, gritty Aussie noir flick not to be missed. 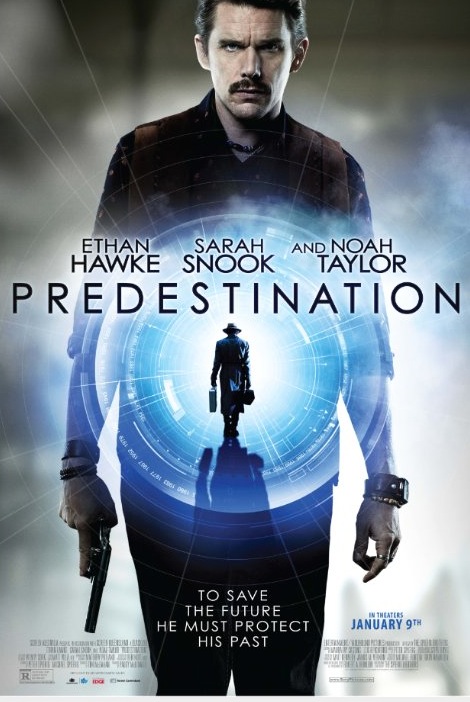 The Spierig brothers reunite with Ethan Hawke for their first feature in five years and it is a fascinating film. The screenplay is based on the science fiction short story by Robert A. Heinlein “—All You Zombies—”. Reportedly the story was written in one day on July 11, 1958, and shared time travel themes with another Heinlein story written a decade earlier.

The Spierigs’ first two feature films were vampire/zombie genre flicks but this one has nothing to do with zombies, despite the misleading title of the original short story (the title is taken from its closing lines). Thank goodness. If there were any of the standard zombie tropes in the novel, this screenplay has written them out.

Instead, this is a film of social mores, misfit personalities and fascinating places and times. Just as it is well enough that the zombie aspect drops out, it is also to the credit of the film makers (and benefit of their audience) that the sci-fi part of the film can be left in the background. Heinlein appears to have written the original short story to explore the paradoxes of commonplace conceptions of time travel. Time travel may be the most often explored, and abused, plot in science fiction. Although it was undoubtedly trendy in post WWII America, in this film its treatment is almost satirical as the convoluted pretzel logic and downright funny biological implications are played out.

Aussie actress Sarah Snook does most of the heavy lifting as “The Unmarried Mother.” Ethan Hawke plays the “Temporal Agent” whose job it is to travel back and forth through time to prevent crime. The Agent works for a shadowy, futuristic FBI/CIA composite that has long since broken its ties with the governing public and is semi-rogue. This is where the noir corrupt police theme creeps in. The agency has obtained the priceless power to travel through time and is not doing well in coping with it. The threat of absolute power corrupting absolutely is lingering constantly in the background.

The Unmarried Mother echoes society’s shortcomings in dealing with birth control and unusual sexual orientations. She is an obvious victim, being alone and adrift in a fundamentally uncaring society. The Agent is also adrift and although he seems to be the one with the control, he is actually more morally unsound than the Mother. The two of them play a cat-and-mouse game (or better said, Heinlein plays a cat mouse game with them both), mired in the murky fallout of time travel.

The result is a nifty noir in which guilt and apprehension seep into every scene. As the film progresses, the cost of playing with time takes its toll in the form of creeping, deadly insanity.

The noir cinematography by Ben Nott is crucial to the success of this movie. The scenes vary from institution to institution, from the classic noir bar to the boiler room deep in the bowels of the inner city skyscraper. The makeup and costumes echo the various times that constitute the setting of the film. All of this is joined perfectly by high production values and heart felt direction.

Noah Taylor does a great job playing Mr. Robertson. Taylor was able to cut his teeth in the company of the tough guy crew of John Hillcoat’s “Lawless” that included Shia LaBeouf, Tom Hardy, Jason Clarke and Guy Pearce. He is a small, but important part in conveying that feeling of violence lingering just below the surface.

Viewers who know and appreciate the gritty Australian noir genre will love this movie. Although it may be a little too “sci-fi” for some, the slightly sophomoric logic is easy to overlook in favor of the hard hitting action and devilishly understated twists. The plot is dated, but the noir acting, cinematography and score are great. Ethan Hawke and Sarah Snook are perfect, and the direction by the Spierig brothers sets a nice, ever tightening web of possibilities as the clues are divulged and the stakes rise with every turn. From the first few scenes viewers will be bowled over by Ben Nott’s dark and moody filming, the serious-as-a-heart-attack acting and the great music by Peter Spierig.

Put the time-travel gibberish into the background, where it should be. A great, gritty Aussie noir flick not to be missed.