A charming but fatally slow exposition of yet another real Sherlock Holmes. 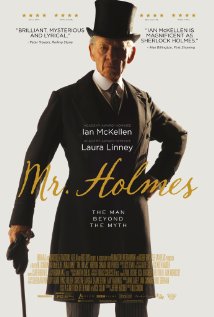 An ageing Sherlock Holmes (Ian McKellen) is still solving cases in spite of galloping senility gaining on his senses by leaps and bounds. Apparently even fictional heroes are subject to time and tides, as the magnificent background of the white cliffs of Dover would suggest. At Sherlock’s side is his juvenile sidekick, Roger, having taken over for a disenfranchised Watson. In a standing joke, Holmes explains throughout the film that he never wears that famous deerstalker hat nor does he smoke a pipe. He prefers cigars and, as often as not, is seen bareheaded.

That is until he tends his beloved bees. His apiary and his travels seem all that is left for his diminishing faculties. Even so he cannot stop noting clues and solving the everyday riddles that make up his life. In this story he is hired to solve one case of suspected infidelity and volunteers for another that he hopes will lead to a cure for his rapidly increasing memory loss. The infidelity case introduces us to adventures from the bizarre glass harmonica and the senility cure, to the horrors of Post WWII Japan. While on these cases he is confronted with past demons that insist on their own reconciliations.

The story is told through flashbacks that add an entertaining dimension to the borderline treacly music and the damp, verdant surroundings of his beautiful, crumbling estate. Although appearing on the verge of death, Holmes musters the occasional walk to the beach beneath the famous white cliffs that have been photographed in such splendor as to temporarily steal the show from Holmes and his apprentice Roger.

Flashbacks provide a soft, warm, nostalgic exposition of what are, unfortunately, not very remarkable aspects of Holmes past. He has a story to write, a story that will help him find himself in the last chapter of his life. As it turns out, he needs more than the skills of observation and deduction to solve his last case. He needs a bit of fantasy thrown in, as well.

Laura Linney flutters around in the background as Mrs. Munro, Roger’s mother and Holmes’ caretaker. Her good acting is lost amidst the overwhelming nostalgia and melodrama of Holmes’ issues and the temper tantrums of Roger, who refuses to relocate to more normal surroundings. The relationship between Roger and Sherlock is warm and positive, suggesting respect of the elderly by the young. A good message there and overall a good film for families, except for one disturbing scene of suicide by train. No blood and guts or anything, but it is unfortunate that this one scene might make this the wrong film for young teenagers.

Hattie Morahan and desperate wife Ann Kelmot, who appears doomed to appear in nervous Nelly vignettes that are so sweet as to take the occasional swerve into the camp. The beautiful soundtrack matches the beautiful surroundings and the inner sweetness of all concerned, but fails to provide a much needed spark. [yasr_overall_rating] [yasr_visitor_votes]