I understand mother! is meant to be open to interpretation but I take it completely literally and I relate to it 100%. This is about the costs of giving yourself up to society. They may genuinely adore you and mean well, but when everyone wants a piece of you, you run out of stuff to give.

Twice Darren Aronofsky creates a nightmare of chaos where strangers erode Mother (Jennifer Lawrence)’s patience. Her husband, only called Him (Javier Bardem), never respects her wishes either. He always prioritizes strangers over the woman he claims to love, and always justifies his own negligence.

Ideally, most people have a balance. You have a few commitments or engagements, then there’s time to take care of personal things. Some social groups are demanding enough to monopolize more time than is fair. I imagine directors and actors are especially sensitive to constant demands and requests.

Not everyone has the self-assurance to say no, but even if they do it’s no shield or armor. Society can be relentless and flat out ignore your reasonable boundaries. So the house guests keep coming asking for a little more and a little more, when they have no right to be there in the first place. The title Get Out would be equally appropriate as Mother is constantly asking unwanted guests to leave.

Most importantly, society will never accept responsibility. They destroy something and instead of taking their cue to back off, they say “what’s done is done, give us more.” And self-interest knows no bounds. People get what they want and it goes badly, yet instead of apologizing they ask for more. Or, saying they’re sorry and acting indignant when Mother is still hurt by their actions. In mother! it escalates to the most horrific destruction and shows even that isn’t enough to satisfy the demands and wants.

It’s an exaggeration when Him asks Mother to forgive people immediately after they’ve destroyed her home or worse, but only by about 24 hours. Look at the discussions surrounding sexual assaults today. Defenders of the predators are saying, “He apologized. What more do you want? It’s time to forgive and move on.”

Actually, they are saying this the day after an evasive plausible deniability apology comes out. Even if the apology were a true admission of guilt and remorse (someone can still be the first to actually do this), apologizing is only the first step. It’s a good step but you don’t get forgiveness right away. You have to keep working for it, and certainly not by re-engaging in the destructive behavior. It’s also relevant because this whole movie is a woman constantly saying no and being coerced or beaten into acquiescence.

It’s kind of a nihilistic take but I see some hope in the power of no. No may need to be more than just a word in extreme situations, because you can say it and the response is “well what about this? Can’t we just have this?” The resolution of mother! is the most extreme way to get rid of unwanted invasive attention. Perhaps the message is: get drastic sooner. Certainly the point where the parents (Michelle Pfeiffer and Ed Harris) whose son murdered the other son in her kitchen ask Mother to give a eulogy would be a good time to put her foot down.

Well, the message should be “respect people’s wishes” but that’s probably not going to happen. Look who’s president. People are going to keep pushing so their targets will have to defend themselves.

Or maybe it’s just that the cycle will always repeat. It takes more than one person to break it. Mother is on her own against the mob against her, including Him. Maybe if we start respecting other people’s wishes, even if we have to give up our selfish desires, we’d create more greater good. That’s far more valuable long term than our immediate wants. The big picture has far greater rewards but everyone misses out when you deny others their dignity.

Certainly it’s a metaphor for what we’re doing to our planet, as critics have pointed out, but it’s also true on an individual level. And everyone thinks they’re Mother in this. Most people aren’t self-aware enough to realize they’re the horde. 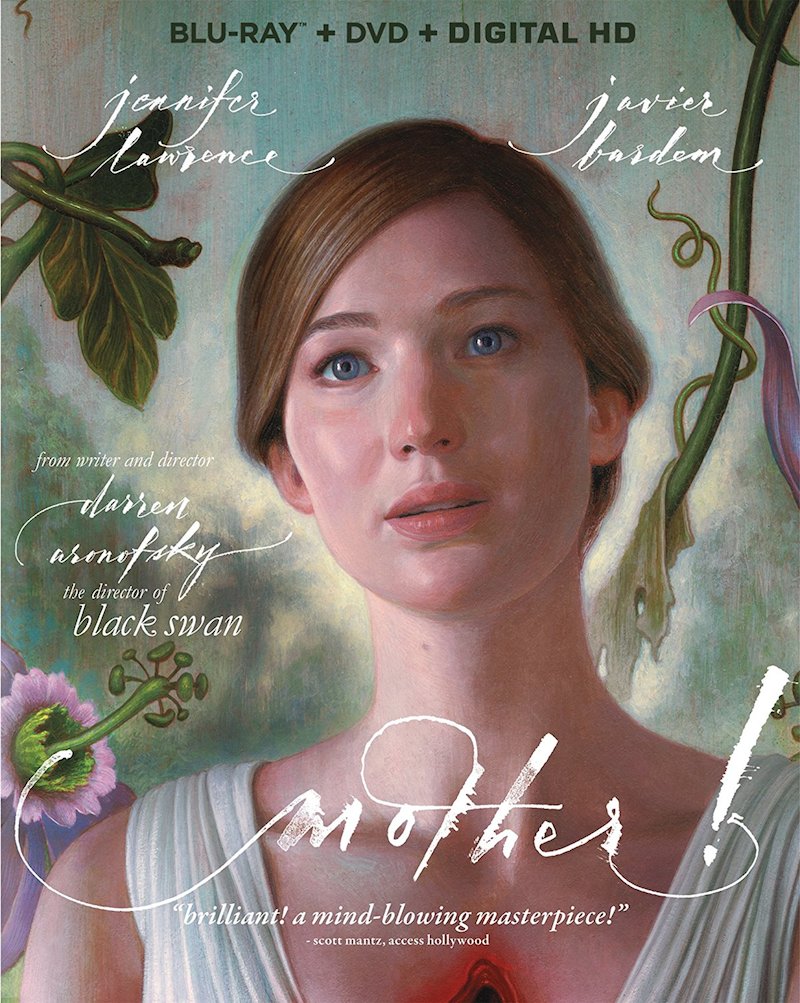 mother! is out now on digital services and on Blu-ray and DVD December 19.