All the gadgetry and double the action fall short. But the pure charm of the movie saves the day. 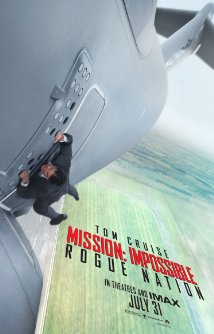 OK, you have to like Tom Cruise. That is the first requirement for seeing Mission: Impossible – Rogue Nation. Also, it helps if you have at least a tiny bit of nostalgia for the original “Mission: Impossible” TV series. It also helps if you do not mind hearing the same MI theme over and over again, arranged in more different ways than Ethan Hunt (Cruise) can break into an impenetrable safe and played at ear-blasting volume. Remember the earplugs.

If you meet the above requirements, check out this splashy, overwrought gimmick-a-thon and enjoy the cast enjoying themselves. Presumably they were all well-paid and had the proper psychological counseling and drug dosages so they could get through the ridiculous series of mind-bending convolutions of Hunt and his intrepid team.

Starting with the best first, Simon Pegg (playing Benji Dunn) flexes his chops a bit and pulls a funny performance out of his hat as the Katzenjammer spy of the group. He and Cruise develop a fair chemistry on screen in the buddy action-comedy department. As the film begins, Benji has to open the exterior doors of an Airbus cargo plane while Cruise is hanging on outside the plane as it is flying at about a hundred miles an hour. At this point the smart viewer learns to not even consider the viability of the film’s technology. It is whacko with a capital W. 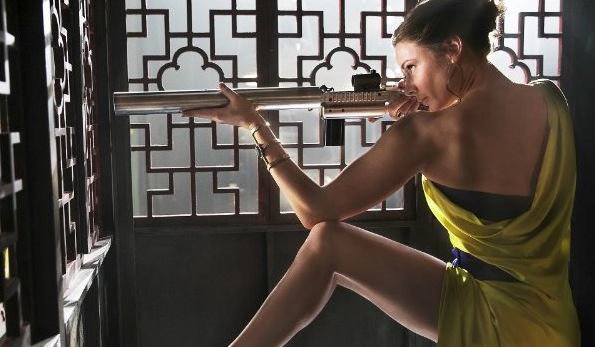 The point is that the actors are having a good time and so should you. Cruise has good reason to be happy; his face has not changed a bit since “Top Gun.” When he grins, those teeth radiate a smile that can be seen from low flying satellites. He and Pegg shoulder most of the actual acting in the film.

Sean Harris plays Syndicate (now there is an imaginative title for a crime organization) head Solomon Lane who has implemented every conceivable, retina scan, finger scan, gait match, Twitter handle, Dow Jones and driver’s license check known to mankind to stop interlopers from interfering with his plan to destroy the world. Will this stop Hunt and Dunn? You bet your britches it will not, and boy are we glad it does not. Aside from being saved, we get to watch Hunt drop into a very cool water vortex to short circuit the security system that otherwise will barbeque Dunn. Sometimes the impossible looks fun.

Alec Baldwin is curiously out of place in his role as the CIA director put in the unfortunate position of competing with the MI team which has all the brains, toys and special effects on its side. Baldwin needs to be in a position where his buffoonery has some clout with it. When he is cast as a loser from the get-go, his persona falls short.

Jens Hultén deserves the Oscar for nastiest looking villain of 2015 in his role as (what else?) assassin and torturer. In fact, his set of bone cutting tools deserves an Oscar for Best Set of Bone Cutting Tools. Ving Rhames plays…, oh, who cares. It would be so wonderful if he could get another role like he had in “Pulp Fiction.” Did he make Tarantino angry or something? Maybe he and director Christopher McQuarrie could get together and put out something like McQuarrie’s stunning “The Usual Suspects” screenplay. We can always hope.

If you have seen it, what did you think?