Filmmaker Matt Sadowski and his leading man Dov Tiefenbach took on the conventional romantic comedy and all its artifice and won with the independent Canadian feature Pretend We’re Kissing.

Set proudly in Toronto, Tiefenbach brilliantly takes on the role of a reserved and socially phobic man who hopes to finally make a match with a girl (Tommie-Amber Pirie) who seems open to him.

She’s patient and encouraging, but there are many obstacles in their way including an alt-babe roommate played by Zoe Kravitz.

So they take it outdoors and into Toronto and onto the island where they are stranded overnight and get to know one another.

Charming humour, cute situations, awkward attempts at physical intimacy – sounds familiar, right? Yes. But Pretend We’re Kissing is anything but a standard romantic comedy. And wait till you catch the ending!

We spoke with Sadowski and Tiefenbach in Toronto.

Pretend We’re Kissing is like a new generation Woody Allen movie. The humour and tone is just perfect, funny, tension, all the things we think about but don’t say out loud.

Dov: I struggle with finding the volume knob on my inner thoughts. I certainly wish I could turn them down and live in moment, but more often than not, the now drowned out by all kinds of nonsense.

Matt: I’m better than I used to be. When I wrote the film, my thoughts consumed me. There were often times that I felt like I should have said something, but didn’t. Or said something that I shouldn’t have.

Dov your timing and delivery is genius.

It’s always a challenge to connect with the circumstances of a scene over and over again, but I find just trusting the writing and your scene partner and not taking yourself too seriously, it somehow happens magically for you.

It’s hard to come up with a fresh addition to the romcom canon but Pretend Were Kissing seems rooted in reality.

Dov: I secretly love a good romantic comedy. But when things turn out a little too well all the time, I get annoyed at how inaccurate that can be.

Matt: I agree with Dov, and it’s probably one of the contributing factors of why we wanted to work together. It’s been a long time since I’ve connected to a rom-com. I often couldn’t relate to the characters, whether how they looked or acted and I felt like there was an opportunity to make the kind of film that I wanted to see.

What was the starting point?

Matt: I started writing the film the moment I landed in New Zealand. I had just written a “hit” play and was moving there after being cast in Power Rangers. I felt like I was sacrificing my career as a respected “artist”.

I had just met a woman I was in love with. But this time it felt different. Being there, gave me the distance to reflect on what I learned from my previous, and awkward, relationships.

I put pen to paper and started writing what would become Pretend We’re Kissing. One of the major reasons that this film took 10 years to make was because I didn’t want to make it with a cast I didn’t feel owned their characters.

The first actor cast was Tommie. I didn’t know anything about her, but she read the role at a script read-through and made every line sound natural. I was very familiar with Dov, but had never met him. When I did, I felt like I was talking to myself. 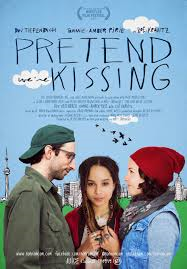 Toronto’s magnificent as Toronto, the Fire Parade, the neighborhoods and stores, getting stuck on the island overnight.

Matt: I have never seen Toronto play itself in the way that I know it. It either is disguised as other cities in films, or shot in a way to make it majestic and sexy.

I didn’t want to shoot the tourist version of Toronto. I wanted it to be just like any other city that is full of life and love and heartbreak. I learned a lot from watching how a filmmaker like Woody achieved that in his own films.

Dov, you may be one of Canada’s hardest working actors – you’ve worked a lot. It’s a tough business, what keeps you going?

Dov: That might be one of the best questions I’ve ever been asked. In fact, I ask myself that every day. Acting is one of those professions where the harder you work at it, the better you get to know yourself.

The better you get to know yourself, the happier you feel. But seriously, you try and hang in there long enough to get an opportunity to do a film like Pretend We’re Kissing.