Barthes’ pared down adaptation of the Flaubert novel is supple, hard hitting and feels contemporary, even set in the 19th century in a hidebound class conscious Normandy, France. Human behaviour has likely not changed much since then so we recognise the characters and their struggles over money, sex and social standing, the same things that drives many of us today.

Emma Bovary played by Mia Wasikowska is a spoiled, thoughtless woman living a middle class life intent on pleasing herself; she takes lovers (Ezra Miller, Logan Marshall-Green) tries desperately to climb the social ladder – an ongoing theme – and feeds an out of control attraction to fine clothes and jewels to attract them, without considering how her husband (Henry Lloyd-Hughes) will pay.
Her addiction to spending results in some of the film’s most intense scenes. Confrontations with her husband and her personal shopper (Rhys Ifans) who demands payment feel heavy and deadly. The discomfort felt in those scenes outweighs the many dangerous sex games Emma plays with her lovers. She is unrepentant on all scores. 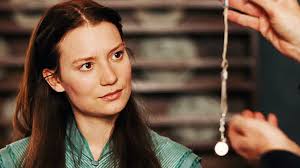 As things begin to fall apart, Emma wanders about the claustrophobic house dressed in fine brocades with gilt trim, realising the crushing debt she’s incurred means the end of it everything. In her favour, she’s young and sheltered, financially clueless and by God she wants the clothes, things she could never have in the convent where she was schooled or her father’s pig farm.
The film is steady and slow, perhaps to reflect life as it was in that bubble. There isn’t a much for a lady – well, this lady – to do but plot with lovers and shop and while away the time. The gorgeous cinematography and attention of period detail add needed frisson.
The pretty faces! Barthes’ camera loves the cast. Bovary has a sexual attraction to her lovers and given the actors playing them, it’s not surprising. Bovary isn’t a deep person and her choices in men seem limited to appearance, and this is a story about sexual desire. Perhaps in her position, given her limited education and sophistication it would be easy to do what she does.
Barthes’ is the latest in the many adaptations of the Flaubert novel and while it doesn’t take many risks, it’s worth a look. It’s a darn good cure for shopping.