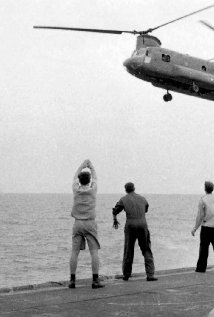 In the year of 1975 both American and the Republic of South Vietnam were struggling, against the odds, to bring peace with dignity to Southeast Asia. The Paris Peace accords of two years’ earlier had established a framework of commitment and cooperation to end the war. In 1974 America’s President Nixon has declared there would be an end to the Vietnam War with dignity for American and South Vietnamese forces and with peace for all of Vietnam. He also declared there would be a crushing military response if North Vietnam violated the Accords.

On August 8, 1974, Richard Nixon announced he would be the first American president in history to resign, following months of scathing investigation and accusation regarding his involvement in the criminal Watergate break in. America had finally had enough of Richard M. Nixon and it had definitely had enough of the Vietnam War. There was no American sympathy for any further involvement in the war and the bottom dropped out of support for the conflict, Peace Accords or no Peace Accords. In the first months of 1975, the battle hardened forces of the NVA unleashed a horrific attack on South Vietnam. Bereft of official support, this moving film tells its story through firsthand accounts by American and Vietnamese military personal who were forced to handle the crisis on their own.

Footage of the US ambassador to Vietnam, Graham Martin, shows his unstinting support of the war and the conflicts between his duty and the harsh realities facing the military forces. During the first months of the assault his message was unequivocal—there would be no thought, conception or planning for any evacuation. To even think about such a failure would be to undermine the South Vietnamese forces by admitting defeat. Shifting to Washington DC, the action shows President Gerald Ford devastated to learn that the fall was inevitable and imminent, and facing the impossible mandate to admit to America’s failure to support the Peace Accords.

As the archival footage shifts back and forth, the clock ticks as emotional inertia and traumatized denial stall evacuation plans until it is too late for an organized exit. Local military leaders and rank-and-file alike saw the real story. Sequences of crack forces with heavy artillery are punctuated with excellent graphics of the NVA flooding south towards Saigon. Officers and soldiers describe the terrifying scenario of the NVA gaining strength daily as they over-ran exhausted, demoralized and ill-equipped defenders.

To be even remotely associated with America or South Vietnam meant an NVA death sentence and every American and Vietnamese soldier knew it. American officers describe how they had counted on the loyalty and self-sacrifice of Vietnamese counterparts in fighting the war and their commitment to save these allies from the NVA. Many Americans had married Vietnamese, whose families and friends would almost certainly be caught up in the reactionary sweep as North Vietnamese forces established control.

As the final twenty four hours approached, excellent film coverage depicts the horrific firestorm that engulfed Saigon’s airport. Before the US ambassador saw it, we see the main route of escape reduced to a field of craters and the burning remains of buildings and aircraft.

One of the film’s unforgettable stills is streets littered with discarded South Vietnamese military boots and uniforms. Although the soldiers ran, there was no place to hide. Through direct and unvarnished interviews with US military personal, the film tells the story of these most dedicated soldiers taking control on their own terms, in direct violation of the ambassador’s orders. In the excruciatingly short time left they began planning and executing the inevitable evacuation, in secret. This was “black ops” of the darkest sort. Failure would mean not only the end of loyal Vietnamese fighters, but the end of the military lives of the US officers and soldiers involved.

This film is a series of interviews with the dozen or so officers, enlisted men and other personnel that made that evacuation possible. The interviews include the harrowing testimonies of highly placed Vietnamese military personnel who didn’t make it out, but survived the “re-education” camps of the Socialist Republic of Vietnam. These stories make one of the most fascinating and terrifying war stories ever told. The film includes archival footage and first hand narratives of unbelievable acts of heroism, skill and courage as the last refugees and military personnel were extracted by helicopter, and every ship that could float and had an operable engine. The footage of tramp steamers that appear to be barely mobile packed to overflowing with refugees is riveting. It also includes firsthand accounts of the heartbreaking stories of those who were left behind, many of whom would face humiliation, torture and death at the hands of the new regime.