A courageous exploration of a woman’s late life awakening, I’ll See You in My Dreams takes us to places rarely visited in conventional romantic comedies – or dramas. Indeed, it treats a mildly shocking premise seriously and breaks down social barriers one after the other to unexpected conclusions.
Carol’s a strong willed, idiosyncratic 70-something who enjoys wine – she’s rarely without a glass in hand. A malcontent with a tinge of idealistic yearning, she’s pretty good tossing barbs when people get too close. Both habits shield her from uncomfortable realities. Life is comfortable but dull and her prickly personality is off-putting and isolating. 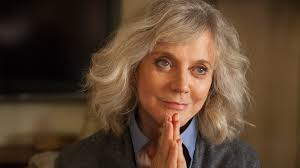 But Carol has a strong suit, the loyalty of love of her girlfriends. Mary Kay Place, June Squibb and Rhea Perlman are her confidants, playmates and supports. They share history and love one another but she puts them down and how if they push her beyond her electric fence of self-preservation.
But one day, Carol bursts out of her comfort zone. 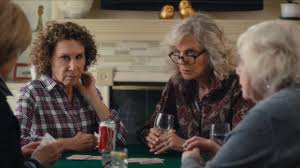 Twenty years after the death of her husband and subsequent self-imposed exile from men, she decides that maybe love is worth having and prepares for battle. Her girlfriends have encouraged her to “get out there”, and one day she just does.
She wakes up fully formed and ready to re-engage; her attitude adjusts – a little – and that old confidence starts to rise up again. 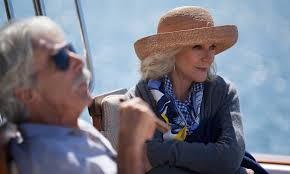 During lunch at the club with the girls she catches the eye of a handsome grey fox (Sam Elliott) in a sports car. It’s instant mutual attraction between two entirely appropriate people. It moves fast.
Meanwhile, there’s a pleasant 30-something (Martin Starr) coming around to clean Carol’s pool, shoot the breeze and ask her advice. He seems unusually attached to her for someone half her age. As we all know, pool boys are traditionally stereotypical comic toys of bored, middle aged housewives. But thankfully their friendship is respectful, graceful and natural. 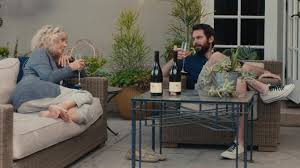 So within mere moments of deciding to put her toe in the water, Carol has two suitors. This lovely state of affairs isn’t the end of the story because as it does, life intervenes, with all its pleasures, pains, difficulties and surprises.
Blythe Danner’s heroic performance feels light and deft. Carol has problematic personality traits and she‘s a tad volatile but Danner’s gossamer touch allows breathing room to take in and accept her as she is rule breaker, s**t disturber and all.
Sam Elliott brings manly charm, the kind that won’t be put off, the warrior type questing for her affections. Bill’s the old-fashioned type, used to deal in “male” qualities and behaviours of long ago, like using his forceful personality to attract and stun the female of the species.
Starr plays Lloyd as a young man confused by his own feelings and not sure quite where they are going. He’s an appealing new kind of cinematic male unafraid to express vulnerability and put false barriers to the side. 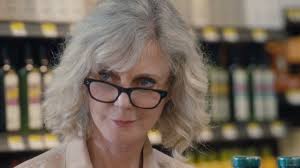 It’s a fun film that dares to go where it goes. It’s challenging and not to everyone’s taste, but if the human comedy is of interest, then I’ll See You in My Dreams is worth catching. It doesn’t have all the angles and answers which is a relief while entertaining.
Comedy Drama
92 minutes
Starring Blythe Danner, Sam Elliott, Martin Starr
Directed by Brett Haley
Rating 3.5 /5