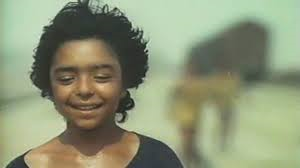 Amir Naderi paints a bleak portrait of life for Iranian orphans in poverty in the semi-autobiographical film shot during the Iran-Iraq War.

A young boy named Amiro (Majid Niroumand) lives at the searing hot docks, looking for any kind of work he can get, mostly gathering bottles that have floated ashore, risking shark attack, selling metal or cold water to thirsty passers-by.

He lives alone on a wrecked ship but sometimes runs with a gang of boys in the same position – alone and hungry and driven by need and dream to succeed as “businessmen” in a tough market. 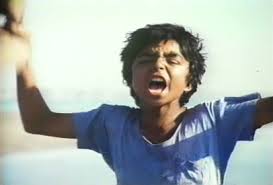 In the background the bombed oil wells are ablaze, and set a spectacular visual and reminder of the political catastrophe they represented. One thing Amiro enjoys in his limited life is running; he chases trains, runs for the sheer joy of it.

He also runs to collect precious things he can sell, if he can beat the other boys to them like a block of ice that melts before he can get it to market.

The block of ice becomes a symbol of the hopelessness of life in that place and that time but capturing it underscores the limitless optimism Amiro retains despite everything, and the unbending will that makes it possible for him to survive. 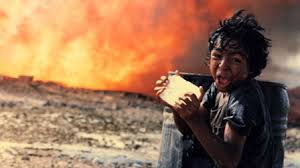 A stunning scene in front of the oil wells fires will stay with moviegoers long afterwards, a testament to the power of the human spirit. It’s an uplifting film that snatches joy from the jaws of despair and want.

The Runner was Iran’s first international hit after the war and it’s just as fresh and relevant today. Extra: that hit of nostalgia hearing the familiar but long gone grind of the camera from the pre-digital age.