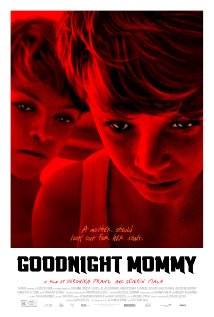 When thing go wrong at home, they really go wrong.

Co-writers/directors Veronika Franz and Severin Fiala put together a traditional but high quality horror flick in this tale of lethal mother-son conflict. A mostly silent soundtrack lets the great acting and screenplay tell the story. This puts pressure on the actors, especially the young ones, but they come through nicely. Tough rules set by a strangely alienated mom and a no-nonsense recovery period are countered with fun science experiments on pets and family members. It is not always good to mix fantasy with family.

Nine-year-old twins Lukas and Elias (played by Elias and Lucas Schwarz) are suspicious when their mother (Susanne Wuest) returns from extensive facial reconstructive surgery. In the coming days they grow more and more alienated from Mom, even after she takes off her bandages to reveal a beautiful woman. The boys behave bizarrely enough, running through the fields in horrendous masks and fighting with make-believe weapons. But the mystery is that of Mom’s disappearance and what necessitated her absence from her children, who she appears to love.

After premiering at the Venice Film Festival and grabbing a nomination for the Venice Horizons Award for films exploring new means and methods, the movie has had a staged roll-out world-wide. This is an old-school horror flick, reminiscent of Peter Weir‘s “Picnic at Hanging Rock.” Not only does the production eschew special effects and a crashing soundtrack, it exploits an almost complete lack of blood to emphasize the most terrifying horror of all, the terror that lies in the mind.

The screenplay and direction walk hand-in-hand with a terrific, gradual, and powerful build-up of tension. The nearly silent soundtrack is accompanied by sparse spoken lines. Actions tell the story and the story is told with tremendous power and credibility. Make no mistake; this plot is not complete fantasy. It could actually happen, and very probably has.

Bright yellow fields of rapeseed make a frenetically stimulating playground for the boys. Dark scenes inside the house alternate with blindingly bright cinematography outside. There are scenes in the field that may be from the past, or they may be from the present. Fire brings out thoughts and memories. Adults know not to play with fire; children are more adventurous.

Suspecting something is amiss, the children canvas the community looking for support in the church and authorities. Of course, nothing comes of it because it is all in their imagination. Or in our imagination. Hard to tell. One of the high points is the visit by the Red Cross volunteers looking for a contribution. There is definitely a need for medical professionals but the volunteers come and go like the rest of the adults in the film. They are as much chimeras as real people.

Nothing radically new or different, but even so you will be on the edge of your seat for the entire runtime trying to guess what will happen next. In the end, it is a treat to see a solid scary tale told without gallons of guts and gore and few special effects.