A B-movie that tried to be something better but stayed a B-movie. 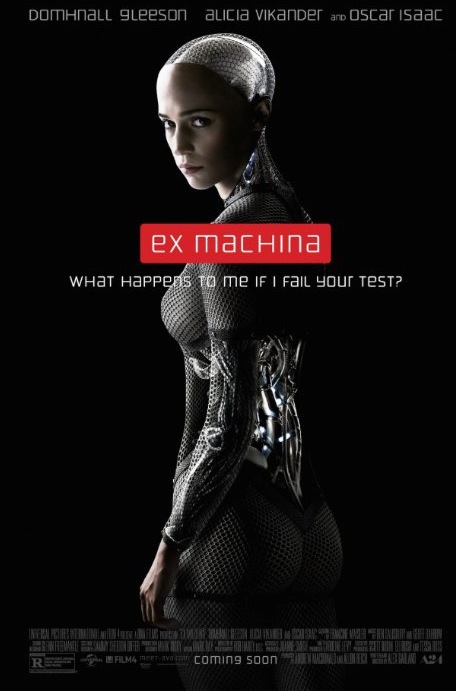 Writer/director Alex Garland’s sci-fi flick is the latest in a long line of slipshod Hollywood treatments of artificial intelligence. This tale starts with a pseudo “imitation game” in which Caleb (Domhnall Gleeson) has been chosen to determine which is the real person and which is the computer armed with AI. To our surprise, Caleb is confronted with neither a computer nor a person, but an automaton programmed to act like a human and equipped with the computer generated human face, and body, of a very beautiful woman. How this adds up to either an imitation game or a Turing Test is lost in the windy chaos of the sophomoric neo-AI babble that issues from master of ceremonies and chief manipulator Nathan (Oscar Isaac).

We know Nathan is super intelligent for three reasons. The first is that he drinks fancy beer with foil wrapped around the bottle necks. The second is that he lives in the middle of nowhere in an expensive all glass house with stainless steel appliances and lots of TV security cameras. The third is that he single-handedly wrote an entire computer program with an exceptionally slick sophomoric neo-AI babble name when he was only thirteen years old.

How this compares to Davy Crocket killing a bear when he was only three is left up to the audience.

The sad thing about the thirteen year old master programmer shtick is that even though most of this screenplay appears to have been written for thirteen year olds, few of them will get to see the film because of the R rating. The film simply has too much frontal female nudity. The nude women/robots are all over the place. You cannot open a glass closet door without female robot pubic hair staring you in the face. Plus, as Nathan tells us, they not only f**k, but they have been programmed to enjoy it.

At this point, the film has come a long way from a Turing Test. Caleb, a combination of Benedict Cumberbatch in “Imitation Game” and Ron Howard in “American Graffiti,” asks Nathan, on behalf of the audience, why a half dozen non-acting nude models are required to tell a story about computer programming. Summarizing the wit and depth of the film in a sentence that could only come from the lips of one who has just sipped from a foil wrapped beer, Nathan replies, “Because sexuality is fun.”

Alicia Vikander plays Ava, the female robot endowed with not only a knock-out body (Vikander is a former ballet dancer) but a brain to boot. She is one of several actresses in the film who have to act as if they are wooden creatures devoid of all emotion and who are one-dimensional computer generated cartoons of real people. She does a great job. As for Oscar Isaac, after the corker of a performance he laid down in “A Most Violent Year” he is going to have to work hard to live down this one.