Ex Machina is a film for our times. It’s a cautionary tale about the potential future trajectory of artificial intelligence and our fear of it.

Computers and robots are facts of life today, but their level of sophistication in 2015 may seem awfully primitive in the future as AI gains more and more footholds.

It is entirely logical to fear that computers will outdistance and turn on us. Alex Garland is a screenwriter making his feature film directorial debut with this chilling drama creates a world in which these things come to pass.

Domhnall Gleeson is a young computer scientist invited to work in a think tank with a celebrated inventor played by Oscar Isaac. The young man discovers a dark secret project and the disturbed mind of the dark genius behind it.

We spoke with Garland in Toronto. 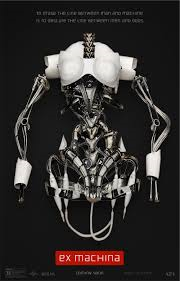 We fear artificial intelligence overpowering us, but I think the ship has sailed on that one. What are you trying to convey about these fears in Ex Machina?

I don’t feel the sense of threat those people feel. I’m trying to present it in a different way, a coded way.

My position is that the anxiety people feel about computers and artificial intelligence is because we see it on a parallel track, they’re here and were here, and they seem to be moving away from us and we feel threatened.

If these machines ever exist that are sentient and self-aware, then they are the product of us, like children are. We have a parallel track, the film because what you want.

Children you create and they outlive you and that idea removes the threat. The threat is the human. It is us. I feel protective towards the machines.

The film is really about the abuse of power, a story about humans if ever there was one and the ultimate outcome. Did you ever look at alternative endings?

Inevitably, when writing you’re carrying out thought experiments all the time. What happens if you flip the genders? What if the three of them could go different ways? You can explore them in a theoretical sense but this is the ending I always thought it should have.

The film’s tone and feel is cold and moody. So Gleeson’s brightness is wonderful as an antidote to the fear, optimism.
It partly because he’s a really, really lovely guy, he’s great he brings sympathy.

Is Isaac’s mastermind Nathan an evil alter of a Bill Gates or Steve Jobs? Did you have anyone in mind?

No one in particular, but what I did have in mind was tech companies, not the people who run them but the companies themselves.

They have a way of presenting themselves to us, they’re like hipster friends, they say “dude” and “hey, let’s go to the beach or the bar and chill”.

They are like your buddy, but they are not. They attach themselves to choices and images in your life and are mostly deceptive.

They aspire to be your friend even as they go through your address book, records and information. It’s more the funny tensions between being your buddy and a powerful corporation.

I found the closet scene and the inanimate captive female robots disturbing, but some men I spoke with didn’t mind it, saying “They’re only robots”.

Maybe some men. Put it this way. The film is not inviting you to sympathise with the guy who has done it. If people react like that, it’s because people respond to narratives the way they want.

The film is pretty clearly saying this is weird and dark. The reaction of the young man is to be chilled by this discovery. It gives him a moral duty to save the robot or she will be there soon. 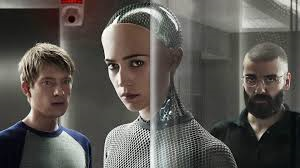 Ava, the robot has no hair or skin, things that are considered secondary sexual characteristics and yet she is sexualised.

She has mesh, that’s what I called it in production. The idea was this. The first time you see Ava its important you know she’s a machine and that there is no ambiguity.

There is a journey to go on and the best way to do that was to have missing sections so you could see a skeletal structure. As soon as you establish she’s a machine, you start to undermine it.

The mesh follows the contours of the female form, when the light catches it you get the sense of an arm, or leg and it pulls you away from the machine, replaced by something feminine.

Some people are sexually attracted to Ava.

It might be particular to the guys you talked to. I’m a writer twenty years and I’ve learned that when I hand the story over there is no way I can predict how people will respond, it’s not the film it’s the reflection of the person receiving the story.

Take the law. In law, sentences and statements are written in order to be as clear as possible and erase ambiguity. There is a whole industry of Supreme Court judges and lawyers trying to figure out ways to get around those certainties, to find loopholes.

If you open that to a whole narrative with deliberate ambiguities embedded into it, the potential of a single meaning is impossible.

All you have is the thing presented and how people respond to it. You’ve got your interpretation and I’ve got mine. Not one of them is correct.

From what I know about your next project Annihilation and that’s just from reading the logline, there seems to be some similarity to Ex Machina. Are they bookends?

No, it’s an entirely different project based on the novel by Jeff Van De Mere about a group of women who enter an area in North America that has been sealed off by the US government.

And we see what’s in there. I just sent the script in to the studio to see if it will get financed. I’m at the stage where fifty- fifty, a coin toss. It may not be that, it may be 80 /20. Ex Machina is my favourite film I’ve done but it was $15M and Annihilation will be $30M.

Congratulations on directing your first feature. You’ve made the journey from screenwriter to director nicely.

We overstate the director’s role. I used to work on books; you do the work on your books alone. The thing I like about film is people working together. But usually that’s disguised to make it seem like one person’s vision. It’s really collaboration and that’s the most enjoyable thing.