A defense of the performing arts blossoms into a larger plea for democracy. 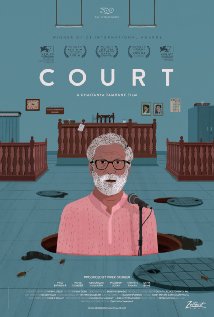 Writer/director Chaitanya Tamhane’s debut feature film is more allegory than story. The characters in the movie almost hover above the meanings developed from scene to scene. On the surface it is a film about a performing artist who is arrested for causing the death of a sewer worker.

In subsequent court testimony complex and conflicting information is revealed. This does almost nothing except to muddy the waters and sentence the audience to go through the same tedious process of bureaucratic manipulation as the hero of the film. Only in the final scenes is the most prominent message of the story revealed.

Vira Sathidar plays Narayan Kamble, an aging, white bearded teacher and performer. The movie starts in his classroom and then moves to his performance of a rabble-rousing protest song urging people to “know your enemy,” distrust leaders and denounce prejudice and the cast system. Immediately, Kamble has two strikes against him. He teaches and he is unabashedly and articulately against the establishment. Although these things would not get one arrested in the Western world, Kamble is arrested.

When his attorney Vinay Vora (Vivek Gomber), who does almost all of the talking for Kamble, inquires at the police station he is confronted with lost paperwork and profound listlessness. This theme of the passive acceptance of laws taking the place of moral principles reverberates throughout the movie. The court hears other cases, interspersed with Kamble’s. One is the mass sentencing of people to minor fines for sitting in the disabled seats of a bus.

As the death of the service worker is investigated, the court insists that Kamble’s lyrics incited the man to commit suicide while at the same time the reprehensible working conditions of the man, and many like him, are exposed. At the heart of the issue is a concept of terminally abused workers to kill themselves in protest, before the system does it for them. In the painfully convoluted style of the exposition, Kamble says he never wrote such lyrics but wouldn’t mind writing them. There are no simple answers here.

Fighting hard for his client, the lawyer finally gains his release on a high bail. Immediately after, Kamble is back on the street doing the same thing (in a rather catchy and swinging style, actually).

The message behind the story is revealed only in the last few scenes. In the meantime the viewer is subjected to a prolonged look at the lives of the attorneys, their families and friends and the prevailing attitude of class consciousness in India. The laws are complex and most of them are applied differently depending on the defendants involved.

The hero emerges not as Kamble or his hard working attorney (representing the voice of reason) but of art and the self-expression it provides. Everybody has their art and their performance. Some use it freely, others are persecuted. The difference is the context of the art. The message being that until context is taken out of the freedom of artistic expression, there will be no true art. Superficial paperwork and insincere moral mandates will take the place of legitimate emotion. The result will be a society of uncaring robots.

In the end, Kamble is hauled away again in a never ending repetition of his own real life performance.

Love After Lockup exclusive: Lizzy gets caught up and Daniel learns about...

That Time I Got Reincarnated As A Slime Season 2 Part 2...