Mel Brooks’ Blazing Saddles proved not all westerns have to be serious and managed to show just how far the iconic director could push the envelope. The film manages to offend just about everyone possible, but you can’t help but laugh – even if you kind of feel like you shouldn’t be laughing.

Celebrating the film’s continued legacy, Warner Bros. has treated fans with a new 40th Anniversary Blu-ray edition of the film that comes loaded with bonus materials to make it well-worth the double dip. The film also looks and sounds great on the Blu-ray format. 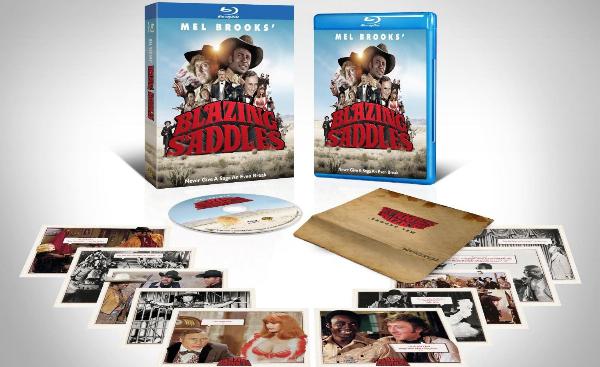 The best feature on the release is the new Blaze of Glory: Mel Brooks’ Wild, Wild West. The feature sees Brooks (who remains just as funny as ever) discussing his own film legacy; his thoughts and fears while making Blazing Saddles; and how the film continues to have an impact with audiences. He also discusses the film’s stars and shares some great stories. Without a doubt, Blazing Saddles is one of the best comedies ever made, but this feature is the reason to buy this new edition.

Along with the new feature, the new Blazing Saddles Blu-ray comes with previously released bonus material including commentary by Brooks; the documentary Back in the Saddle; the Black Bart – 1975 TV pilot inspired by the movie; deleted scenes; and theatrical trailer. The new edition also includes 10 art cards featuring quotes and images from the film.

Nominated for three Academy Awards and on the American Film Institute’s 100 Years…100 Laughs, Blazing Saddles sees comic genius Brooks firing on all cylinders in his tale of the Old West where the town of Rock Ridge falls under the scheme of evil State Attorney General Hedley Lamarr (Harvey Korman), who wants to buy the town’s land cheap so he can make a fortune from the railroad when it comes through the area.

To make sure the town folk are in the mood to sell, Lamarr sends a gang of thugs to terrorize the citizens and then goes even further by convincing Governor William J. Le Petomane (Brooks) to appoint black railroad worker Bart (Cleavon Little) as the new town sheriff. The town is less than thrilled when they discover their new sheriff, but he gains the assistance from Jim (Gene Wilder), a drunk gunslinger who also goes by “The Waco Kid.” The two slowly win over the town and make a stand against the scheming Lamarr in an ending that has to be seen to believe.


No matter how many times you see it, Blazing Saddles will make you laugh until it hurts. Brooks and company make sure to offend just about everyone with the film’s raunchy dialogue and questionable dinner choice (they do eat a lot of beans after all). It may not be a perfect western or the best example of the genre, but it is probably the funniest western ever made.

Loaded with bonus features and featuring a great picture, the new 40th Anniversary edition of Blazing Saddles is the one to own.