Although the book paints a better picture of Chris Kyle as a man, this is one RPG of a war story. 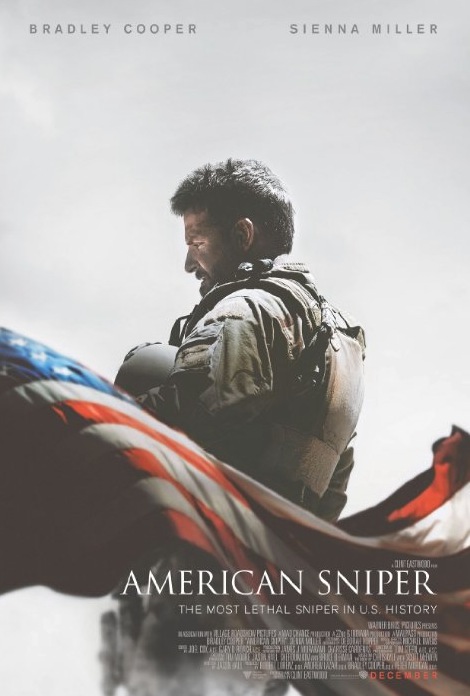 Clint Eastwood’s latest directorial effort is an entertaining combination of war movie and biopic. The book by the subject, Chris Kyle (co-written with Scott McEwen and James Defelice), contains a much better description of his life. The film is a much better war story. For those who are more interested in the life and times of a war hero, read the book. For those who want a rambunctious, no holds barred war flick, see the movie. For the best results, read the book and then see the movie. There are many interesting differences between the two.

Although there are no guarantees as to the accuracy of either the book or the movie, this story of war, and peace, comes across as straight up. Chris Kyle apparently had a normal rural Texas upbringing that mirrored the childhood and early adulthood of any number of Americans. His particular environment was heavy on guns and rodeo. Neither the book nor the film paints him as a philosophic soldier. He felt he was doing his duty, saving the lives of his fellow Americans and destroying “evil.” The important thing is that he turned out to have an extraordinary talent for aiming a rifle and hitting what he aimed at.

This brings us to the “R” rating for war violence, which is very real. It is to the film makers’ credit that this film does not paint the violence of war as a scratch from which a real man soon heals. This is deadly violence, sometimes against women and children, and oftentimes reflecting a complete lack of discrimination between the good guys and the bad. The action is superbly executed and unflinchingly realistic. Where the repeated episodes in the book become routine, the film is never routine for even one of its 132 minutes.

Having said that, it is possible that the most important and potent aspect of the film is the story of Kyle’s PTSD and the effects this had on his family life and, eventually, his death. Bradley Cooper (Richie DiMaso in “American Hustle”) plays Chris Kyle and Sienna Miller (Nancy Schultz in “Foxcatcher”) plays his wife Taya. When Kyle returned after four tours and many, many sightings of people through his scope, people whom he killed and whose deaths he was forced to witness, he was a changed man. The violence that had made him a hero seemed to have also made him incapable of living a normal life.

As expected, the film romanticizes the action, but the effects of the PTSD speak for themselves. Eastwood’s direction and Jason Hall’s screenplay work best when the action is hot and heavy and special effects can take the place of real acting. Unfortunately, when the story shifts to Chris and Taya at home, there is a vacuum where the acting should be. The war story lovers in the audience will miss the action when Chris is home and those trying to get a handle on PTSD, and its possible treatment, do not get many answers.

The movie includes incredible scenes of Kyle talking with Taya via cell phone as a whopper of a firefight breaks out all around him, casting an entirely new light on live broadcast warfare. When he drops the phone and his wife is left with nothing but gunshots and explosions, few viewers will not be fragged with the raw emotion. War is, indeed, hell, and the hell of modern wars does not end on the battle field. It comes home electronically, physically and emotionally.

This is a huge production with a legion of cast members and first rate production. It terms of war action, it is every bit as riveting as “Saving Private Ryan” and “Hurt Locker.” Oscar nominated cinematographer Tom Stern rejoined with Clint Eastwood after sharing a string of smash hits including “Million Dollar Baby” and “Changeling.” The camera work and editing (Joel Cox and Gary Roach) are critical for this film and simply do not let up for a second of the action sequences. Both Cox and Roach also have a string of success stories with Clint Eastwood, including an Oscar for Cox for Best Film Editing for “Unforgiven.”

Overall, an exciting and well produced war story that, even if falling short in its acting, is a truthful depiction of war, soldiers and their loved ones at home.