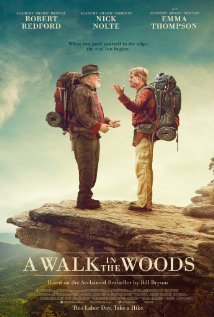 It’s chilly March and a pair of adventurers has set off to conquer the Appalachian Trail and its 2,200 miles or 3,500 km of wilderness. New gear and optimism drowns out a wife’s warnings and fears.

The men crave adventure and feel compelled to perform this rite. Like those who climb Everest or Meru it’s a question of ego and pride as much as the desire for fresh air and a change of scene.

But what if the adventurers are in their waning years? Late sixties, early seventies? Signs along the trail warn hikers to be of sound body and mind before attempting to enter, and it’s highly likely they may not meet the requirements.

Man is wilful and these two are no exception.

Robert Redford is Bill Bryson, on whose book the film is based and Nick Nolte plays his traveling companion Stephen Katz. Katz is overweight, an alcoholic, and unfit, where Bryson is fit for a man his age and has a gung-ho spirit.

They share a history of adventures around the world, but haven’t spoken in years. The last outing didn’t end well. But Katz catches wind that Bryson is looking for a hiking companion and makes his case to come with.

Bryson’s wife (Emma Thompson) is against the trip and Steve. She has painstakingly gathered articles on dire things that have happened on the Trail but Bryson Must. Do. It. She gets it, though.

The rite of passage isn’t only the trail, it’s managing the pressures of passing time and dwindling personal resources, ultimately, death. Warding off death.

Katz and Bryson start rough trying to find common ground because they can’t continue with resentment hanging over their heads. A lone female traveller latches on to them; she’s obnoxious and mouthy and they’re forced to desert her. At last, a bond! 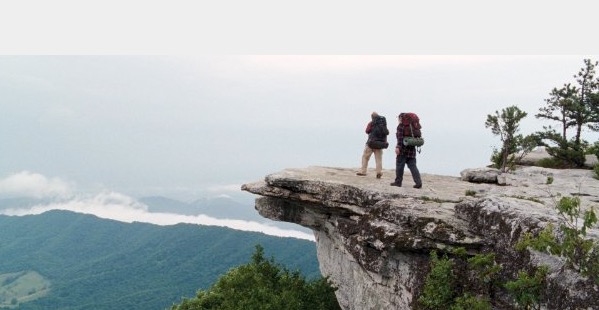 Katz and Bryson soon rediscover the things that made them companions decades earlier. Things lighten up and the strain of watching them dance around each other dissipates.

Great difficulties lie just ahead on the trail. Bears come to the campsite, there’s quicksand, extreme cold and heat, a lady with an underwear problem and a flirty motel manager and increasingly dangerous trails. That’s okay – these are guys who have overcome obstacles to survive and know how to keep their own counsel and cool.

It’s pretty tame stuff, a gentle adventure and character study that will interest older audiences. It asks us to ponder the concept of knowing when to get off the ride. That requires knowing who we are, acceptance and grace.

The Appalachian Trail is breathtakingly beautiful and the cinematography makes good use of it. The locations are spectacular – endless forested mountains, powerful waterways, rocky outcroppings and flora and fauna of this unspoiled land, all under environmental threat.

A Walk in the Woods Trailer

In some ways it wakes us up. Redford speaks to the wonder of human curiosity, our passion for living and the glories of nature. His environmental message is loud and clear.

It’s nothing new, but it is a breath of fresh air. It may be an authentic reconstruction of Bryson’s mind-expanding hike along the Appalachian Trail. We should be so lucky to have tried.