Full disclosure: Monsters & Critics received free samples of the products mentioned in this article for review as well as a free tour of the distillery. However, the opinions expressed are independent and our own.

Of the hundreds of distilleries in Scotland, it would be hard to top a tour of Glasgow-area gem Auchentoshan.

Good things come in threes for lovers of the Aqua Vitae. You cannot officially call a whisky “Scotch” unless it has officially aged three years and a day and of course, it must be made on Scottish soil.

There are also three precious ingredients that make the final pour, and Auchentoshan, set in a charming location and whose name means ‘corner of the field’, is the only Scottish distillery to insist on triple-distilling every drop.

Auchentoshan is a living historic landmark, with a relatively blood-soaked past. It is set on vivid green rolling hills with the scent of heathered peat in the air; the walls lined with a tell-tale black fungus fed by exposure to ethanol, the “angel’s share” of evaporation that occurs in a major distillery.

But this peaceful setting was once under fire. Auchentoshan was nearly wiped out during the Nazi bombings of WWII. There’s a strong sense of history and a slight air of melancholic loss in this scenic setting, making it one of Beam Suntory’s most preserved, unusual and desirable distilleries to tour.

A proper Lowland scotch whisky distillery, Auchentoshan was established in 1823 and to this day, triple distillation is their calling card for all their production. This reason alone makes Auchentoshan an essential listing on any proper malt whisky menu.

It is also reportedly a haunted place, with our tour guide Neil Matthew confirming this suspicion as he ushered us to the blender’s room where the resting and aging cellar has a palpable and eerie vibe as precious scotch lie sleeping in aged, dusty dated sherry, bourbon and virgin casks, depending on their particular varietal.

Auchentoshan is also a working distillery, meaning you will witness the entire process of whisky making as grain in the malting process elicits germination and becomes “washback,” a cold-weather loving, thickish beer-like liquid.

The water used to make Auchentoshan is special, piped in from Loch Katrine several miles north of the distillery. Regional peat, not hops, adds the distinct phenolic elements as well as floral, iodine and charcoal notes (depending on what part of the country you are malting in).

Those concerned about waste and runoff should note that the distillery gives their left-over malty mush to farmers to feed livestock over winter.

In massive barrels made with impressive 16-foot longcuts of Oregon oak, ground-down barley is then infused with water and the malted wash is now busy working.

The sugars do their magic with the yeast creating a boiling, roiling effect. The alcohol is now beginning to take hold.

The end result after all the careful winnowing, filtering and distillation is a clear young spirit that needs further polishing inside wooden casks. The types of casks — virgin, sherry, bourbon or cognac — all give the final coloration and nuances to the whisky.

During the tour you are ushered from stage to stage, inhaling the various scents of the malt and marveling at the precision and care with which the three simple ingredients, barley, water, and yeast, are coaxed by Auchentoshan into the magical eau de vie.

The final destination before shipping out is the resting room, a no smoking zone and dark and quiet place with chilled air, where instinctually you find yourself speaking in hushed tones.

There are several of these, some housed in separate blackened (by that tell-tale black fungus) warehouses on the Auchentoshan campus where those who work at the distillery have seen and heard unexplainable paranormal occurrences.

There’s a reason, according to our guide.

In 1903, Glaswegian brothers John and George MacLachlan took this distillery in the Clydebank section of Glasgow and grew it, until the Second World War.

Nazi bombs then targeted the area’s shipyards, and the nearby distillery took direct hits, with a thousand plus people dying in the area. Over a million liters of scotch were lost in the shelling too, which was a crushing financial hardship for the locals.

After tasting scotch straight from the cask in the reportedly haunted blender’s room and aging area, we headed back into the main building and downstairs to the tasting room where a glowing Christmas tree and an array of gorgeous Auchentoshan scotch was waiting.

Our unanimous favorite picks in the extensive tasting came down to the Auchentoshan 24-year-old Noble Oak, Auchentoshan Blood Oak and the affordable and luscious Auchentoshan Three Wood, aged in bourbon, Oloroso and then Pedro Ximénez casks. 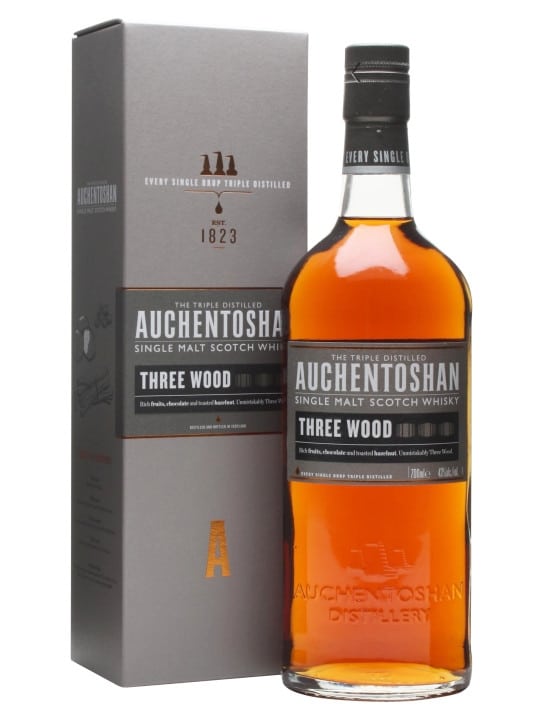 It is, for the money, one of the finest Lowland Scotches you can purchase (around $60+/- USD.)

If you love excellent scotch and learning about the craft of making fine whisky, make every effort to go and see this marvelous place and experience the history — and the end result — for yourself.