With The Wolf of Wall Street, director Martin Scorsese has created a movie the audience either loves or completely hates. The film pushes the limits of just about everything you can and can’t do in a big-budget Hollywood film and seems to celebrate debauchery, or at least how it was defined by the 1980’s stock market.

The film manages to offend the audience on just about every level, and keeps them laughing even though they know they shouldn’t be enjoying what is happening on screen. It is almost like a train wreck, even if you know you should stop watching you can’t look away. 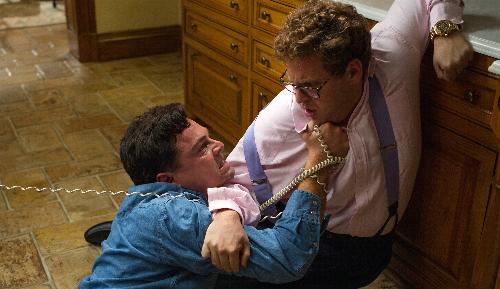 Like other Scorsese films, the Wolf of Wall Street examines how wealth and power can corrupt anyone through the film’s extremely impressive performances from Leonardo DiCaprio and Jonah Hill as two men who achieve extreme success in life and end up in total ruin thanks to their decadent lifestyle.

In the opening scenes, the audience is introduced to what the film has in store for them thanks to a wild office party that features hookers, midget tossing (it’s not disgraceful because in the contract they refer to the midgets as an act instead of people), drugs and a marching band in their underwear.

Jordan Belfort (DiCaprio) narrates to the audience about how the party is to celebrate his incredible wealth and how this wealth gives him the right to do pretty much anything he wants to do. The audience is then told his back story of how he started in a low-level position at a Wall Street firm and slowly started his rise under the mentorship of stock broker Mark Hanna (a scene stealing McConaughey). Just as life seemed to be going his way, Belfort finds himself unemployed after the Black Monday crash that left his firm bankrupt and it impossible to find a job as a broker.

Married and needing work, Belfort takes a job at a less than reputable firm selling penny stocks to blue collar workers. He also sees the potential for success thanks to the higher commission he gets compared to blue chip stocks. Befriending Danny Porush (Hill), who goes to work for Belfort after seeing his paycheck, Belfort starts his own firm with a group of friends who he teaches to sell stock. Adopting the respectable sounding name of Stratton Oakmont (which has a fake back story to make it sound even better), Belfort and Porush quickly become rich thanks to their various scams for manipulating stock prices and other backdoor dealings.

Along with the lavish lifestyle, Belfort and Porush develop serious drug dependencies and other vices (such as a taste for hookers of various price ranges as described by Belfort). They also start breaking more laws – including smuggling cash to Switzerland. Belfort dumps his first wife for an upgrade, but doesn’t even stay true to her.

Like most Scorsese crime films, Belfort’s world comes crashing down as his lifestyle gets more and more out of control. He flaunts his power at FBI Agent Patrick Denham (Kyle Chandler), and can’t even get out of his own way when he makes a deal to stay out of prison. 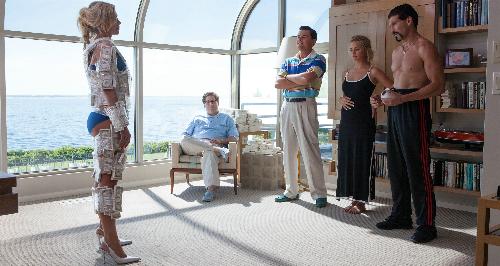 Make no mistake, The Wolf of Wall Street is not an easy movie to watch and will not please everyone who takes the time to see it. Scorsese and company seem to be reveling making the characters as corrupt as possible and the film as decadent as it could be (it holds the current record for the most “F bombs” in a movie). It also features some great performances from its cast and some of the funniest moments you will see in a film (even if you are not completely sure you should be laughing when you see them).

DiCaprio and Hill deserved their Oscar nominations and play the roles with no apology. It is impossible to like either of these characters and the outrageous acts they commit on screen keep you hooked on the story. The audience wants to see Belfort pay for his lifestyle and the fact that he is so smug about getting away with it through his narration of the story.

Belfort constantly reminds the audience he is better than them simply because he is rich and therefore the laws don’t apply to him – even when it comes to what kind of prison he will serve his time. Hill also shows no remorse for his wild lifestyle, and is willing to do whatever it takes to keep the party rolling. The two actors have great chemistry and as unlikeable as they may be, it is a hell of a lot of fun watching their antics on screen – such as the delayed reaction they have to some Quaaludes.

On Blu-ray, the film looks incredible with all of Scorsese classic touches popping on the screen, such as Hill’s bleached white teeth or McConaughey’s tan. The director loves to make wealth just seem tacky and Blu-ray is the perfect format for all his debauchery madness. The Blu-ray also comes with a detailed look at the making of the film and all the work that went to bringing the party to the screen. 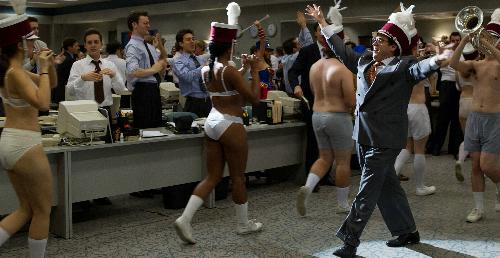 The Wolf of Wall Street pushes the audience’s limit to the extreme, but is well-worth the journey. It is not the kind of film everyone will love, but will keep you glued to the screen until the end credits roll.

Michelle Duggar criticized for photo with daughters, fan wonders ‘where is Jana?’

This Is Us: Sterling K. Brown dishes on mid-season premiere and Randall’s...
Sign up for our newsletter!