Although it features a fast pace and some great action sequences, I, Frankenstein fails to live up to the potential of the film’s story elements. The use of a war between gargoyles and demons is great, but Frankenstein’s monster Adam feels too bland to truly matter. The film might have been better if it left Adam out altogether and called itself I, Gargoyle.

Based on the graphic novel by Kevin Grevioux, I, Frankenstein was directed by Stuart Beattie (who also handled screenwriting chores) and sees Aaron Eckhart stepping into the role of Mary Shelley’s famous monster. He is joined by Yvonne Strahovski, Miranda Otto, Bill Nighy, Jai Courtney, Socratis Otto, and Aden Young.

I, Frankenstein starts off with a quick retelling of the Frankenstein legend as the monster narrates how he was brought into existence, and the price he made Victor Frankenstein pay for turning his back on his experiment. The audience is then introduced to the larger story as the monster, who is given the name Adam, is introduced to the gargoyle army that the angels of heaven have placed on Earth to defend mankind from the demons of hell. It appears Adam (who has no soul) and Dr. Frankenstein’s journal are the keys to tipping the scales of the war in the demons’ favor. Several gargoyles want Adam destroyed, but their queen (Miranda Otto) feels he can help them defeat the demons thanks to his strength and eternal life. When Adam refuses, he is given weapons to kill demons and sent on his way.

The film then jumps to present day as Adam (who looks like he has been hitting the gym quite a bit) talks about his life in exile and how he has returned to hunt the demons down. After humans are killed in the crossfire, the gargoyles capture Adam and the queen decides it is better to keep him locked up forever rather than let him risk human lives. Sadly, the demons know where Adam is and attack for an action sequence that makes the movie worth watching. After the queen is taken prisoner, Adam decides it is time to pick a side and make a stand against the demons.

I, Frankenstein is not a horrible movie, but it is not nearly as good as it could have been. The action sequences between the demons and gargoyles are fun to watch and have a “B” horror movie vibe to them that help save the film – especially when the gargoyles transform mid-dive from a bell tower. The visual effects could have been better, but they work for the comic book feel of the film. Sadly, the demons don’t quite work as good and are a bit of a wasted opportunity as most of the time they are just in human form with eyes changing or a new face.

As fast as the film’s pace moves, there is a lot of story to I, Frankenstein. Beattie and company do a good job of grounding the film’s beginning in Mary Shelley’s original story before morphing it into something new for the audience to enjoy. A film about Frankenstein’s monster battling other monsters would be fun, but I, Frankenstein gives us more with a lush backstory about the gargoyles’ creation and purpose. The demons are given the same kind of interesting backstory as they are treated as an evil corporation with Bill Nighy often coming across as more Gordon Gekko than Viktor (although the talented actor does seem to be channeling much of his performance from what he did in the Underworld franchise).

It is also interesting how the gargoyles are far from the good guys in the film. At times, their treatment of Adam is just slightly better than what the demons plan for him. Unfortunately, these elements never seem to fully work – possibly because the pace is moving so fast that the film jumps from one action sequence to the next without any real time spent for the audience to care for the characters or even learn their names.

As Adam, Eckhart is the best looking screen version of the monster to ever be seen. Adam looks like he could be on the cover of a fitness magazine and there are barely any scars noticeable to make him appear as a monster – which helps the forced love story with Yvonne Strahovski. The talented actor does his best to carry the movie and Adam seems filled with rage every single second he is on screen. Sadly, there isn’t much more to him. In a film filled with monsters, Frankenstein’s iconic creation is the blandest looking thing on the screen.

In addition to looking solid on Blu-ray, the disc comes loaded with commentary from the filmmakers, a look at the making of Frankenstein’s monster, and a look at creating the other creatures of the film. 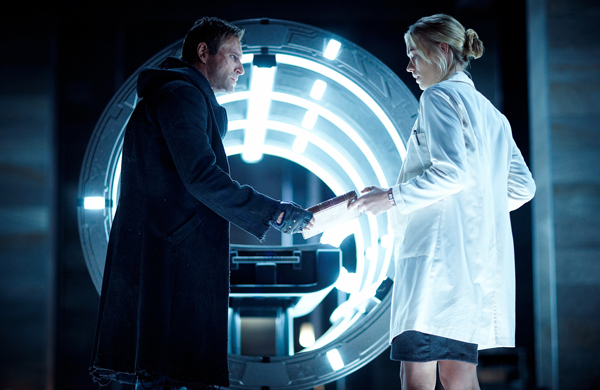 Although it has a few good moments and a lush story, I, Frankenstein feels like a missed opportunity minutes into the film. All the ingredients are there to make a fun monster flick, but never come together to keep the audience entertained and wanting more.