2 Chainz made headlines after he proposed to his longtime girlfriend Kesha Ward at the 2018 Met Gala. Still excited that his bride-to-be said yes, the Atlanta rapper took to Instagram to share his joy.

Several celebrities were quick to congratulate the happy couple. One of the most puzzling responses came from Tamar Braxton — who told 2 Chainz that she’s singing at their wedding!

As the couple walked the red carpet at the Met Gala on Monday night, 2 Chainz, donning a black Versace suit, dropped to one knee and asked Kesha to marry him. After the proposal, Kesha, who was dressed in a white gown, flashed her new rock at the crowd as they cheered her on.

It’s not the first time the rapper, whose real name is Tauheed Epps, got down on one knee for a high-profile proposal. Ward also said yes back in 2013 when 2 Chainz proposed at the BET Awards. It’s not clear why the couple never wed in the years between but it looks like the pair are still very much in love.

In the early hours of Tuesday morning, 2 Chainz shared a photo on Instagram, proclaiming, “she said yes bru” as if she may not have this time. Quickly, congratulations poured in from the Pretty Girls Like Trap Music rapper’s fans and friends alike.

A post shared by 2 Chainz Aka Tity Boi (@2chainz)

One comment came from Tamar Braxton, who has an interesting history with the rapper. She responded: “I’m singing at the wedding” followed by three emojis.  A few hours later, 2 Chainz responded to Tamar with a laughing emoji of his own. 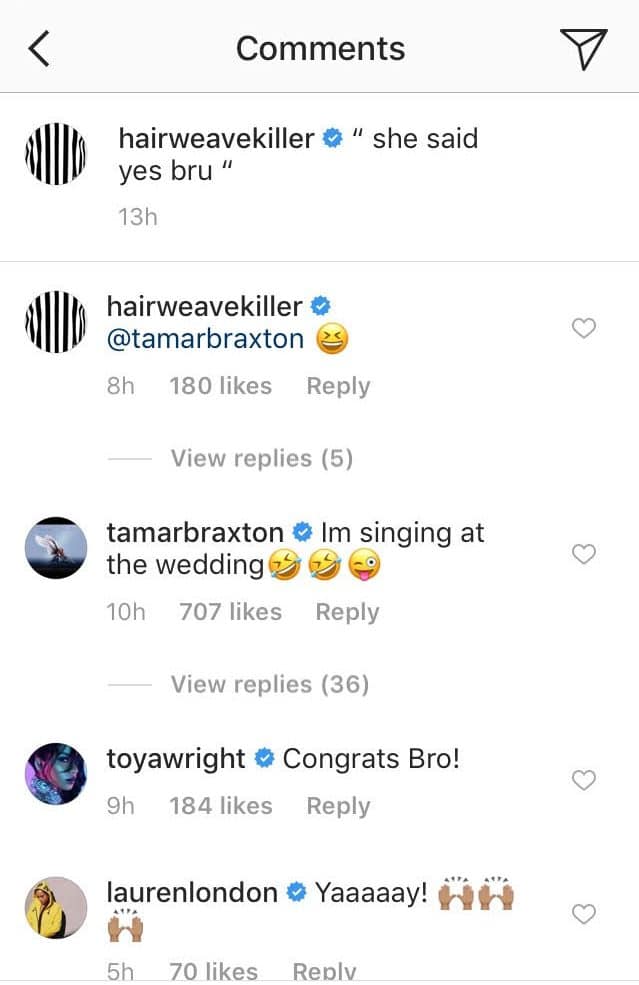 It’s no secret that Tamar Braxton has been a huge 2 Chainz fan for a long time. Back in 2016, before she was fired from The Real, Tamar told 2 Chainz in person just how big of a fan she is.

“I don’t know if you know,” Tamar began. “But you’re my Michael Jackson.”

During the sit-down, Tamar continued to explain to 2 Chainz that he is her “ratchet music of choice” while Adrienne Bailon chimed in, cosigning for her former friend that she is constantly listening to his music.

Tamar’s love for 2 Chainz goes back even farther than that too. Back in 2013, she told Singers Room the same thing, citing 2 Chainz as her favorite “ratchet artist”. It’s safe to say that Tamar is loyal, at least when it comes to music.

Clearly, singing at 2 Chainz wedding would be a dream come true for Tamar Braxton. Hopefully, he’ll go ahead and marry Kesha Ward this time, rather than making her wait five more years for another proposal. After all, she did say yes!