Rapper Rubi Rose joins the growing list of celebrities and influencers to create an OnlyFans account during the coronavirus lockdown.

The Big Mouth rapper, who has 1.3 million followers on her Instagram account, says she made $22,000 dollars in just one day.

The 21-year-old rapper made the announcement on Twitter, saying “Let’s see what the hypes about… link in bio,” and was quick to clap back at her critics.

Rubi Rose’s OnlyFans has nine posts, but they were quick to leak on Reddit. Her account was not hacked — rather the leak was a result of her OnlyFans subscribers copying the photos and videos, then sharing them with other Redditors.

However, this hasn’t stopped the rapper and Instagram model from cashing in on her sexy photos and videos. According to DJ Akademiks, her OnlyFans continued to cash in as the account made over $100,000 in 48 hours. 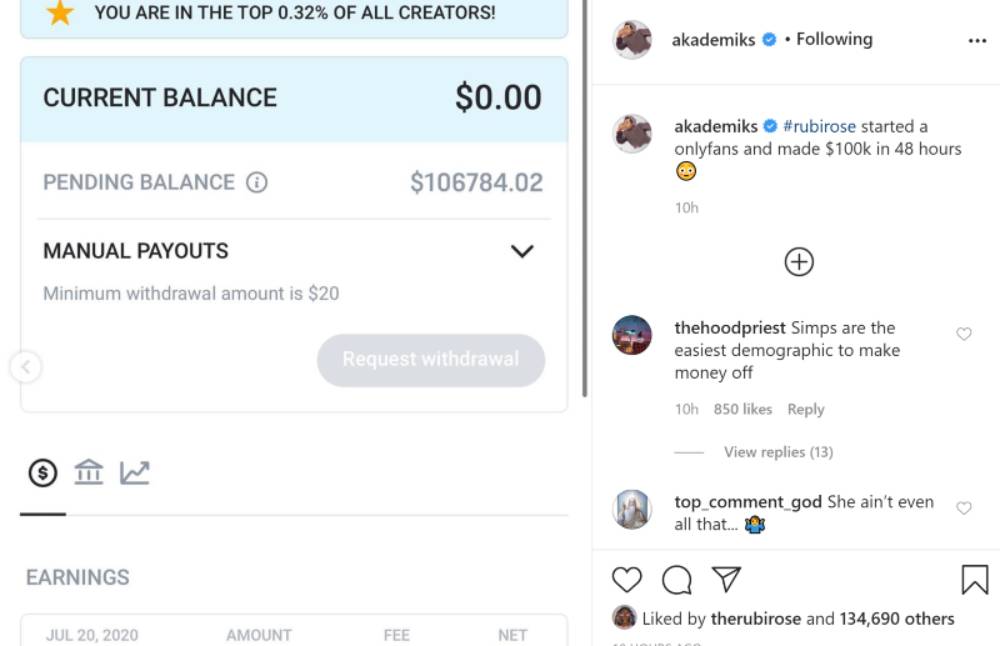 Rubi Rose has been linked to Lil Tjay, Travis Scott and Playboi Carti

Rubi Rose claimed to have dated Travis Scott and 21 Savage. She was also in a relationship with Playboi Carti and recently dated Bronx rapper Lil Tjay. In May, Rose took to Twitter to accuse Lil Tjay of begging her to be his girlfriend before cheating on her with a fan.

She also said the rapper left her stranded after flying her out for his birthday, claiming that he refused to pay for her return flight.

According to Hot New Hip Hop, Lil Tjay denied the accusations and claimed that she was acting out because she was heartbroken. He tweeted that he booked her the flight back home after she allegedly called the cops on him after the former couple argued.

Influencers and celebrities, such as Love and Hip Hop stars Erica Mena and Safaree, have joined OnlyFans to cash in on the craze. The platform is known for allowing content creators to interact with fans and sell content for a subscription fee.

While the website host fitness gurus and musicians, it is primarily known for creators selling nude — or semi-nude — content.