Nicole Thea, a content creator and YouTuber, has died at age 24, according to a statement published on her official Instagram account. Thea was pregnant with her unborn son Reign.

“To all Nicole’s friends and supporters it is with great sadness that I have to inform you that Nicole and her son she and Boga named Reign sadly passed away on Saturday morning,” the Instagram statement reads.

Nicole Thea’s family has also permitted her pre-scheduled YouTube videos to air. The 24-year-old’s cause of death was not revealed as her mother requested privacy as she mourns the death of her daughter and unborn grandson.

“RIP My beautiful baby girl Nicnac and my grandson Reign, I will miss you for the rest of my life until we meet again in eternal heaven.” 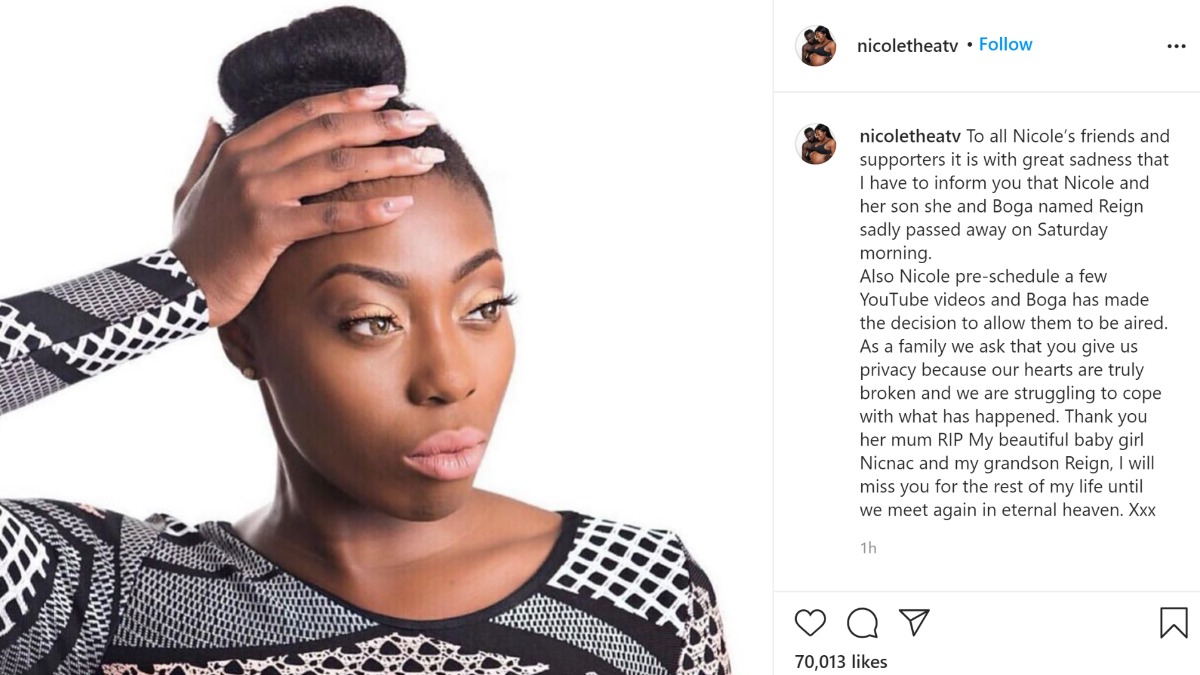 Nicole Thea had frequently updated her YouTube channel and Instagram. A recent video featuring a behind-the-scenes pregnancy shoot was uploaded just an hour before Nicole Thea’s shocking death was announced on her Instagram account.

Who is Nicole Thea?

Nicole Thea is a British-based content creator with over 4 million views, 74,000 subscribers, and over 100,000 Instagram followers as the time of writing this report. Thea and her boyfriend Global Boga were expecting a child and have several videos documenting their journey. In the video below, the couple reveals that they are expecting a child.

Global Boga, real name Jeffery Frimpong, is a British-Ghanian member of Ghana Boyz — a group of dancers and content creators. Boga and Nicole met at a dance rehearsal for the One Africa concert, according to her YouTube video ‘HOW WE MET!!’.

He appears in most of the late YouTuber’s videos as the fun-loving couple frequently uploaded a variety of content, such as dancing and music as well as other content related to their life as a young couple.

While Thea and her unborn son’s cause of death are currently unknown, many fans have speculated that she died during childbirth. However, this has not been confirmed by her family.

Following the heartbreaking news of her death, tributes poured in.

“Boga really just lost the love of his life and unborn child in one go… I can’t imagine the pain he must be feeling. God, I pray for helping and comfort. Rest in peace Nicole Thea and baby reign”

This is honestly so sad, life is way too short. Rest in perfect peace Nicole Thea and baby Reign 💔 https://t.co/UD5u3QREOt

Two days before Nicole’s death was announced, Boga’s last Instagram post featured him dancing in excitement as he was set to become a new father.

“If you believe children are BIG BLESSINGS from God drop some ‘Rrrrrrr’ I Can’t wait to be taking my son to the parks & Playground,” he wrote.